E-cigarettes as a tool to reduce smoking-related harm

Non-combustible tobacco products such as electronic cigarettes are much less harmful than traditional cigarettes and are therefore an attractive option to reduce the harmful effects of smoking. Yet the use of these products continues to be discouraged by the majority of tobacco control organizations, and a lot of misinformation circulating in the media even goes so far as to suggest that they are as or even more harmful than cigarettes. This “demonization” of the e-cigarette means that I am increasingly meeting smokers who refuse to make the transition to these products by mistakenly believing that they do not represent a less toxic alternative to tobacco. This was recently confirmed by a study showing that in 2015, 40% of Americans perceived the e-cigarette to be as or more harmful than the traditional cigarette, triple the number than in 2012. It is important to correct this false impression, because discouraging smokers from quitting traditional cigarettes by opting for e-cigarettes deprives us of a valuable tool in the fight against smoking.

A tobacco rather than a nicotine problem
The disclosure of the “tobacco papers”, i.e., internal notes and confidential reports from tobacco multinationals, revealed the scandalous efforts of this industry to maximize the dependence potential of one of the most addictive substances in the plant world: nicotine. As such, nicotine is not dangerous because it is not carcinogenic and has no major impact on health at the amounts present in tobacco. Rather, it is nicotine dependence that is catastrophic for the health of smokers, because the burning of tobacco generates several thousand highly toxic products, and the repeated consumption of cigarettes exposes them to dramatic increases in the risk of cardiovascular disease, pulmonary diseases and several types of cancers, particularly lung cancer. As is often said, “People smoke for nicotine but they die from the tar.”

Electronic cigarettes
This difference in toxicity between nicotine and cigarette smoke means that products that allow the absorption of nicotine, but without combustion, could greatly reduce the damage caused by tobacco. One of the best-known non-combustible tobacco products is the electronic cigarette (or e-cigarette), a device in which a nicotine solution is heated to about 80ºC using an atomizer, which generates an aerosol that takes the form of a white “vapour” similar in appearance to cigarette smoke. The “vaper” inhales a small amount of nicotine, like a smoker, but scientific research in recent years has clearly shown that this vapour contains only a tiny fraction of the toxic compounds that are generated during the combustion of tobacco. This difference in toxicity is well illustrated by a study showing that saliva and urine samples from regular vapers contained much lower amounts of carcinogenic nitrosamines and toxic volatile compounds such as acrolein, acrylamide and acrylonitrile than those of smokers. This is in line with a recent analysis showing that the carcinogenic potential of aerosols emitted by electronic cigarettes is only 0.4% that of traditional cigarette smoke. Based on all currently available data, the Royal College of Physicians of England estimates that the risk associated with the use of electronic cigarettes is at least 95% lower than that associated with smoking tobacco products, and could even be considerably less.

The use of e-cigarettes is a recent phenomenon and it is not yet possible to quantify precisely how far this product can reduce the incidence of tobacco-related diseases. On the other hand, according to the data accumulated for several years in Scandinavia on the effect of another non-combustible tobacco product, snus, one can be optimistic. This product consists of a tobacco pouch (similar to a tea bag) that is applied in the oral cavity, which allows the absorption of nicotine without the need for combustion. Virtually unknown here, snus is the main form of tobacco used by Swedes (20% of regular users, versus 12% who smoke cigarettes), and this preferential use of non-combustible tobacco is associated with significantly lower mortality caused by cancer and cardiovascular disease than in all European countries (see Figure 1, top). In contrast, Swedish women use very little snus and have tobacco-related mortality rates similar to Europeans in general (Figure 1, bottom). The example of snus therefore illustrates how simply substituting combustible tobacco with a non-combustible form can have an extraordinary impact on the incidence of tobacco-related diseases. 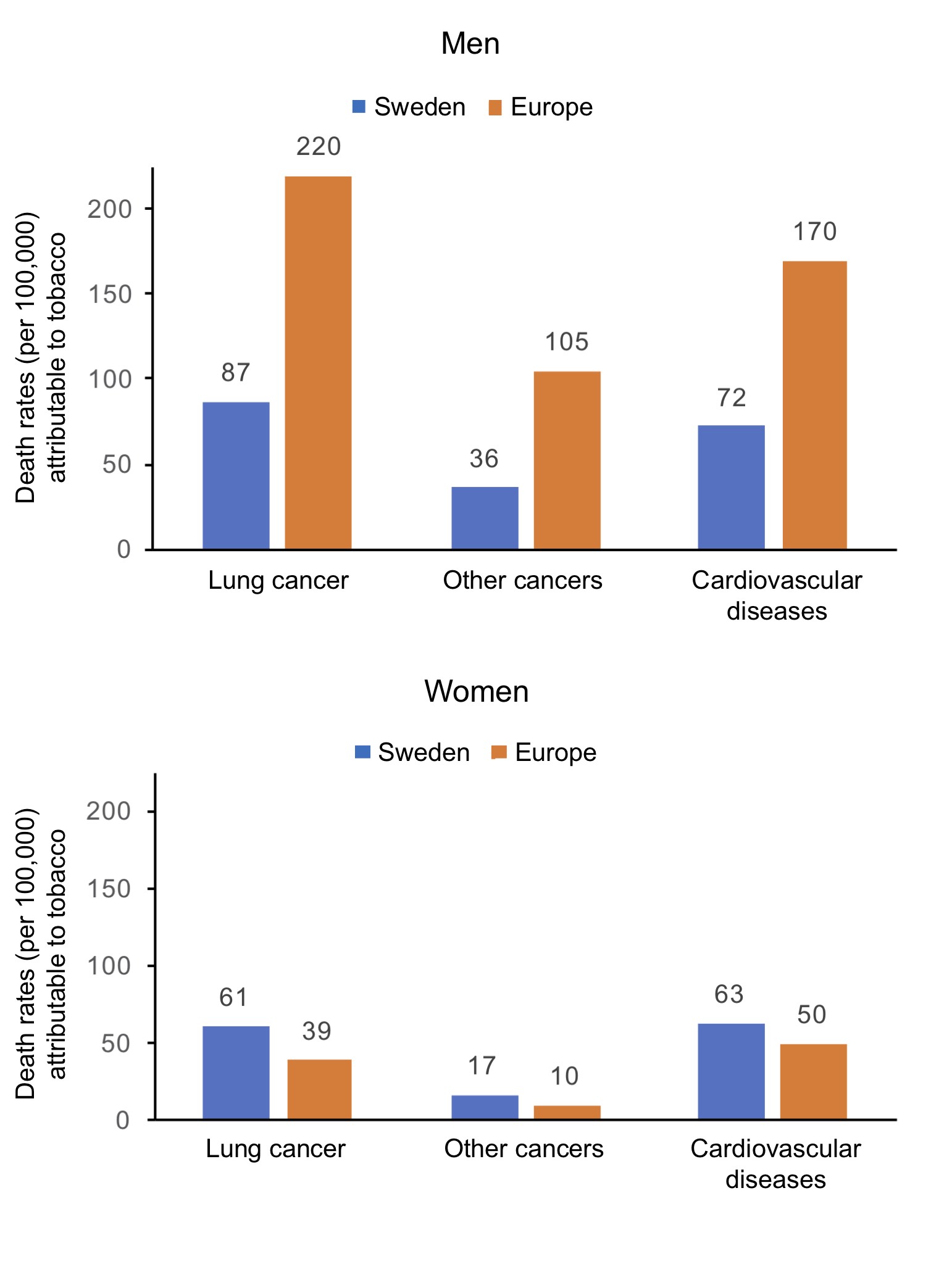 Figure 1. Comparison of tobacco-related death rates between Sweden and the average of other European countries. Adapted from Lind (2014).

Modernizing tobacco control
Unfortunately, the potential of these non-combustible tobacco products remains very little used in tobacco control. With a few exceptions, the traditional approach of anti-smoking organizations to reduce the number of smokers remains to advocate abstinence from all tobacco products, either by quitting smoking spontaneously or by using nicotine substitutes approved by the medical community (patches, gums, pharmacological agents). On the other hand, the electronic cigarette is still not regarded as a valid alternative and its use is even strongly discouraged, in spite of the very large number of scientific data showing that these products are much less dangerous for health than the traditional cigarette.

The main argument against the electronic cigarette (or snus) is that these products could serve as a gateway to traditional cigarettes, especially among young people. This conclusion is based on the results of studies (here, here and here, for example) showing that teenagers who have tried e-cigarettes are more likely to smoke a tobacco cigarette than those who have never been in contact with e-cigarettes. But as several experts have pointed out, this interpretation is very problematic because it does not take into account the fact that a young person who is attracted to tobacco will experiment with several forms available, without this meaning that testing one necessarily leads trying another.

In any case, the most important parameter in terms of public health remains the actual rate of regular smoking among young people, and the data collected is very reassuring. Several studies show a very significant decline in the use of traditional cigarettes among teenagers between 2010 and 2016, despite a dramatic increase in the popularity of e-cigarettes during this period. Studies in the UK, where e-cigarettes are now an integral part of a comprehensive tobacco control strategy, show that the vast majority of young people are just experimenting with e-cigarettes and that very few (less than 3%) become regular users. This proportion is even lower among non-smokers, with only 0.4% of them becoming regular vapers. While we must remain vigilant and closely regulate the sale of e-cigarettes to young people, these data clearly show that very few non-smoking young people will become regular smokers following experimentation with an e-cigarette and therefore this product does not seem to be a gateway to smoking.

In practice, studies show that the vast majority of e-cigarette users, young or adult, already smoke traditional cigarettes. Since this combined use of electronic and traditional cigarettes is associated with an increase in the smoking cessation rate, it therefore seems reasonable to encourage (not discourage) smokers to adopt this product in order to reduce their exposure to the toxic compounds of cigarette smoke. Rather than a gateway to smoking, the electronic cigarette could instead be an “exit door”, a concept supported by some European studies showing that about 6.1 million smokers quit smoking with e-cigarettes and that another 9.2 million have reduced their consumption of combustible tobacco with this product. The same is true for snus, where research has clearly shown that this product does not represent a stepping stone to traditional smoking and that its use has on the contrary contributed to drastically reducing the smoking rate in Scandinavian countries.

It is therefore high time to modernize tobacco control, taking into account the harm reduction that can be provided by new non-combustible tobacco products, especially e-cigarettes. Everyone agrees that eliminating smoking altogether is the ultimate goal of tobacco control, but that does not mean that it is undesirable to reduce the harm caused by smoking in people who cannot quit smoking or who persist in doing so. This concept of “harm reduction” has been used for several years to mitigate the negative impacts of high-risk behaviours (drug use, sexual behaviour, automobile transportation) and there is no reason why this approach cannot be applied to smoking.

In this sense, we should welcome the new anti-smoking policy recently announced by the U.S. Food and Drug Administration (FDA). Breaking with the traditional “hard line” of public health organizations that advocate pure and simple abstinence from all tobacco products, the FDA proposes a more nuanced approach combining two main aspects: 1) to oblige cigarette manufacturers to drastically reduce nicotine levels in tobacco to make it non-addictive; and 2) to prevent this reduction from creating an illicit market, encourage the development of less harmful non-combustible tobacco products (such as e-cigarettes) so that smokers who cannot quit may still reduce their exposure to the toxic compounds found in cigarette smoke. This represents an enormous potential for reducing the harm caused by tobacco and it is hoped that this approach will be seriously considered by the tobacco control agencies.

Every year, 6 million people die from diseases caused by tobacco use and if we avoid being too dogmatic, while closely controlling the sale of these products, the substitution of traditional cigarettes with their electronic version could represent a major turning point in human history by preventing millions of deaths in the 21st century.