Vitamin B12 supplements are essential for vegans

More and more people, especially young adults, are choosing to become vegans, i.e., to eat an exclusively plant-based diet (vegetables, fruits, oilseeds, legumes, whole grains) and not consume any product of animal origin (meat, eggs, dairy products). The most common motivations for adherence to veganism are the ethical aspects of animal husbandry and slaughter, environmental issues (pollution associated with the production of animal products), and the benefits of plant-based diets on human health in general, particularly with respect to cardiovascular diseases.

Despite all these benefits, abstinence from any form of animal products means that vegans are at greater risk of deficiencies in certain micronutrients found exclusively in the animal kingdom. This is especially true for vitamin B12, which plays an important role in the functioning of the human body, so a deficiency of this vitamin can cause very serious health problems. The purpose of this article is to convince vegans that vitamin B12 supplementation is the only way to effectively counteract this deficiency and that these supplements are absolutely essential to maintaining good health.

A complex vitamin
Vitamin B12, also known as cobalamin, has several unique characteristics that give it a special status in the large family of vitamins. First, it is distinguished from other vitamins by its extremely complex chemical structure (see below) including a corrin ring similar to that found in haemoglobin and chlorophyll and to which is attached a cobalt atom (hence the name cobalamin). This structure is the culmination of a series of biochemical reactions using thirty different enzymes that, collectively, transform a very simple molecule (the amino acid glutamate) into B12 (to grasp the scale of this transformation, it is important to mention that it took more than 10 years for a group of about 100 chemists to successfully synthesize this vitamin in a test tube). 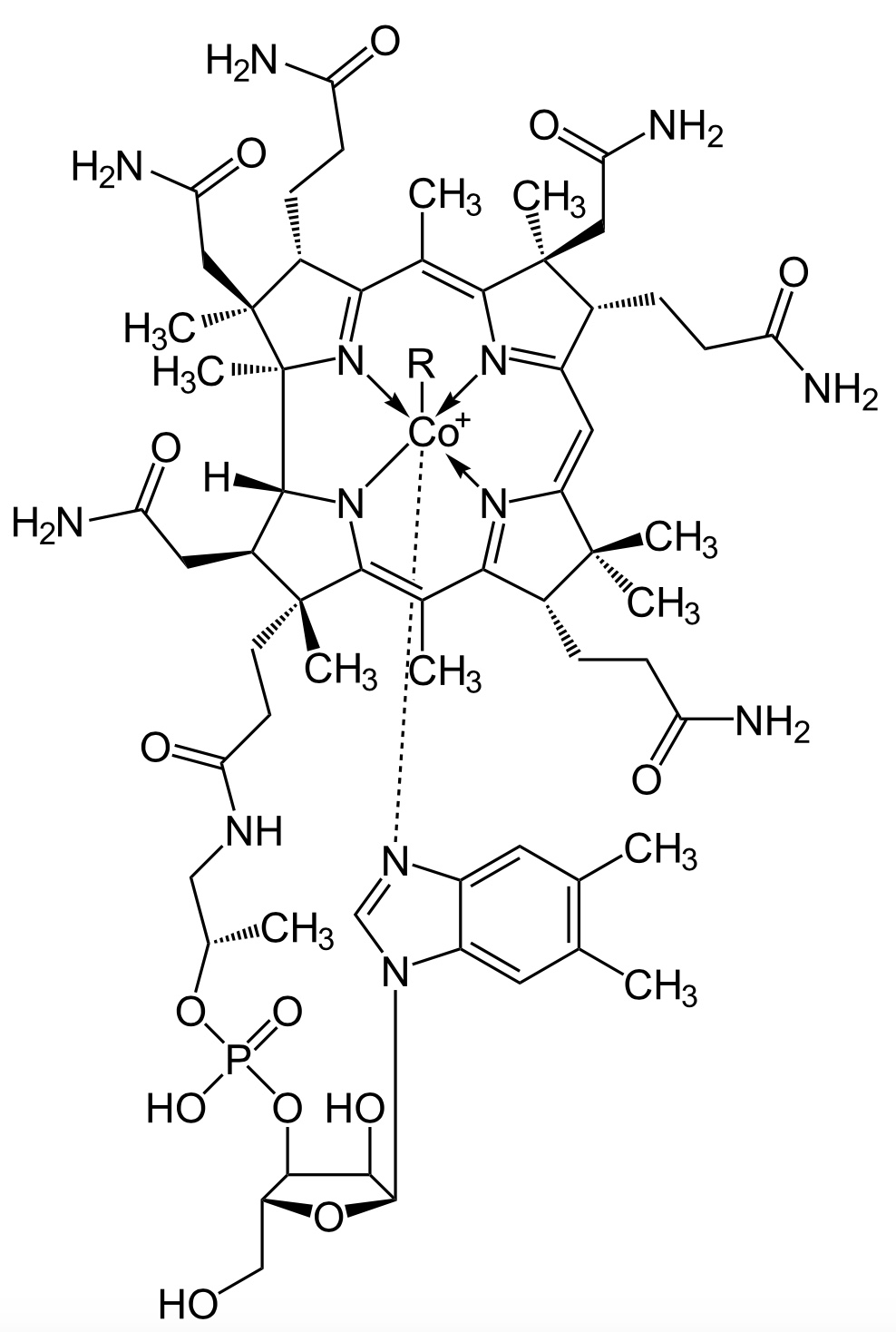 From bacteria to humans
Another very particular characteristic of vitamin B12 is that the enzymatic machinery necessary for its production is exclusively found in certain bacteria. During evolution, plants and animals have “lost” these enzymes and therefore the ability to produce vitamin B12 by themselves. For plants, this is not a problem as they do not need it to survive (with the exception of some algae, see below); however, for animals the situation is quite different. Humans, for example, absolutely need small amounts (about 1 μg per day) of vitamin B12 to ensure the functioning of two enzymes (methionine synthase and -methylmalonyl-CoA mutase) that play an essential role in metabolism and cell growth.

It is the food chain that allows this transfer of vitamin B12 of bacterial origin to animals. Products derived from ruminants (cows, sheep), for example, are excellent sources of vitamin B12, because their stomachs contain bacteria that produce this vitamin and then carry it in the liver and muscles, or secrete it into their milk (see Table 1). Consumption of liver, red meat or dairy products therefore allows an adequate intake of vitamin B12. For people who do not like to eat liver or who prefer to limit their consumption of red meat, some fish and seafood are an excellent alternative because the B12 synthesized by bacteria living in aquatic environments is ingested by marine plankton, which is assimilated by these organisms. For example, molluscs such as bivalves (mussels, oysters, clams) filter large volumes of water to extract plankton and accumulate large amounts of B12 at the same time. Carnivorous fish such as tuna or oily fish such as sardines and salmon (rich in omega-3 fatty acids) are also major sources of vitamin B12, with levels 10 to 20 times higher than those found in poultry or pork. Fish and seafood are therefore major sources of vitamin B12 and in some countries, such as Japan, make up to 85% of the total intake of this vitamin.

Table 1. Examples of dietary sources of vitamin B12. From Dieticians of Canada.

Plant sources of B12?
Although there is a broad consensus that vitamin B12 is absent from the plant kingdom, it is interesting to note that several studies have nevertheless managed to detect the presence of this vitamin in certain plants. For example, seaweeds of the genus Porphyra (e.g., nori seaweed used in sushi) can contain up to 60 μg/100 g of vitamin B12, which is similar to that found in calf liver. This is consistent with recent data showing that more than half of the algae species require vitamin B12 for growth and are closely associated with bacterial species producing this vitamin. Significant amounts of vitamin B12 have also been measured in some species of wild mushrooms (black trumpet, golden chanterelle) and in Paris mushrooms, as well as in some fermented vegetable preparations.

However, the bioavailability of vitamin B12 present in these foods, especially algae, remains uncertain. On the one hand, it has been shown that the addition of nori algae to the diet of vitamin B12-deficient rats caused a 2-fold increase in the amount of B12 present in the liver, suggesting that the vitamin is well assimilated. In the same vein, it is interesting to note that a study of children who adhered for a period of 4 to 10 years to a strict vegan diet, based on the consumption of brown rice and nori seaweed (genmai-saishoku), showed no symptoms of vitamin B12 deficiency. It was also reported that vegans who consumed nori seaweed (2.4 μg B12/day) and dried wild mushrooms (0.7 μg B12/day) for 8 months had normal blood levels of vitamin B12 and adequate blood count.

These results are interesting, but it should nevertheless be mentioned that a study carried out on children with a vitamin B12 deficiency showed that even if algae consumption made it possible to increase blood levels of vitamin B12, it did not succeed in correcting anemia, which suggests that the ingested vitamin B12 was not bioavailable. In the current state of knowledge, it seems premature to recommend that vegans consume algae to avoid a B12 deficiency.

Overall, these observations indicate that vitamin B12 is absent from plants, with the possible exception of some algae, mushrooms and fermented vegetables. Recent observations, however, indicate that several plants have the capacity to passively absorb this vitamin when it is present in the surrounding soil, which could eventually allow the production of plants containing vitamin B12. In the meantime, the only proven way to get this vitamin from food is to eat foods of animal origin, whether meat, fish and seafood, eggs or dairy products. Unless you add insects to your eating habits! (See box.)

As vitamin B12 is found exclusively in animal products, many people may wonder how our primate ancestors, who were vegetarians, were able to obtain enough to ensure their survival and allow the evolution of the human species. Firstly, simply through contamination of the foods consumed: monkeys do not wash the fruits, shoots and other vegetables they eat and the presence of soil (and therefore bacteria) on these foods can provide small amounts of vitamin B12 needed to live. Since early humans were also vegetarians and mainly ate fruits and tubers, it is likely that much of the B12 intake of our distant ancestors was achieved in a similar fashion. However, the contribution of insects should not be ignored: it has long been known that great apes spend a lot of time hunting a wide variety of insects (termites, ants, bees, etc.), larvae and worms, even if these animals represent only a tiny fraction (<1%) of their daily food intake. But it is an energy expenditure that is really worthwhile given the very high nutritional value of these insects, especially for their high content of vitamin B12 (termites, for example, contain up to 970 μg/100 g). It can be assumed that insect consumption helped ensure adequate vitamin B12 intake during the early stages of human evolution, particularly before meat became a part of our diet. It is interesting to note that this consumption of insects (entomophagy) still exists today, with no less than 2 billion humans who regularly eat insects. Moreover, insects are increasingly seen as a viable alternative to traditional meats because of their many health and environmental benefits. There are, however, significant cultural barriers to the consumption of insects, larvae or other “bugs” and, unless there is a drastic (and unlikely) change in our dietary habits, vitamin B12 supplements remain the best solution to compensate for the lack of animal foods.

B12 deficiency
The absence of vitamin B12 in plants necessarily implies that people who adhere to a strict vegan diet, which completely excludes all animal products, are at high risk of vitamin B12 deficiency. This is indeed the case: studies to date indicate that a large number of vegans have blood levels of vitamin B12 lower than recommended, a proportion that can reach 86% in some studies. This is a dangerous situation because the main consequence of vitamin B12 deficiency is pernicious anemia, caused by disruption of DNA synthesis. In this disease, the decrease in DNA synthesis causes megaloblastic anemia (very large red blood cells), the appearance of various gastrointestinal symptoms (loss of appetite, constipation), and certain neurological symptoms (numbness, loss of balance, depression, memory loss). At the cardiovascular level, vitamin B12 deficiency leads to an increase in blood levels of homocysteine, a derivative of the amino acid methionine that has long been recognized as a risk factor for cardiovascular disease. When present in excessive amounts, homocysteine ​​promotes clot formation and prospective studies show an association between elevated levels of homocysteine ​​and the risk of coronary heart disease and stroke. The negative consequences of a vitamin B12 deficiency are numerous, and it is therefore extremely important to ensure that adequate blood levels of this vitamin are maintained.

Blood tests are usually used to diagnose a lack of vitamin B12, because anemia is the main sign of a B12 deficiency. It should be noted, however, that this criterion is not infallible, especially for vegans: in people who eat a lot of vegetables, folate (vitamin B9) intake is very high and can “mask” the B12 deficiency by eliminating the signs and symptoms of anemia. However, the damage to the nervous system caused by B12 deficiency is not reversed by folate and neurological problems can continue to worsen and cause irreversible damage (dementia, paralysis). Again, the best way to avoid this type of problem is vitamin B12 supplementation.

Which supplements to choose?
The recommended daily intake of vitamin B12 is 2.4 μg, a quantity that can be easily achieved with supplements on the market. In most cases, vitamin B12 is in the form of cyanocobalamin, which is rapidly converted to methylcobalamin and 5-deoxyadenosylcobalamin, the active forms of the vitamin. In some cases, the supplements already contain the active form of B12 (methylcobalamin), but this does not seem to influence the absorption of the vitamin or its bioavailability.

It should be noted that several foods available on the market are fortified with B12, including breakfast cereals, several soy products, as well as some types of yeast (RedStar, for example). In the last example, it is important to ensure that the vitamin has been added to the preparation because the yeast does not produce B12. Finally, cyanobacterial preparations such as spirulina are not valid sources of vitamin B12. This alga instead contains pseudovitamin B12, a form of vitamin that is biologically inactive and may even hinder the absorption of B12.