The effects of climate change on health

On May 11, the Mauna Loa Observatory in Hawaii recorded carbon dioxide (CO2) levels of up to 415 parts per million (ppm), an atmospheric concentration almost twice as high as before the beginning of the industrial era (280 ppm). This record concentration, never reached in the last three million years, is a direct consequence of the continued growth of CO2 emissions from the combustion of fossil fuels and land use (deforestation, change of land use). Yet, despite warnings from climate scientists over the last several years, global CO2 emissions continue to increase, so that if the current trends continue, models predict that CO2atmospheric concentration could reach 550 ppm in 2050 and nearly 940 ppm by the end of the century.

CO2 is the main greenhouse gas and the increase in its concentration is correlated with an increase in the average surface temperature of the planet. Compared to the period before the start of the industrial era (before the surge of human-induced CO2 emissions), the global average temperature of the globe has increased by about 1 °C and the majority of this increase (0.8 °C) has occurred since the 1970s (Figure 1). At present, the average global temperature is estimated to increase at a rate of 0.2 °C per decade as a result of the CO2 build-up produced by current and past pollutant emissions (up to 20% of CO2 persists in the atmosphere for more than 1,000 years). It therefore appears that global warming could reach 3.2 °C in 2100, even if the signatories of the Paris Agreement respect their commitments to reduce pollutant emissions. The initial objective of the Paris Agreement to limit the rise in global temperature below 2 °C therefore seems unachievable. 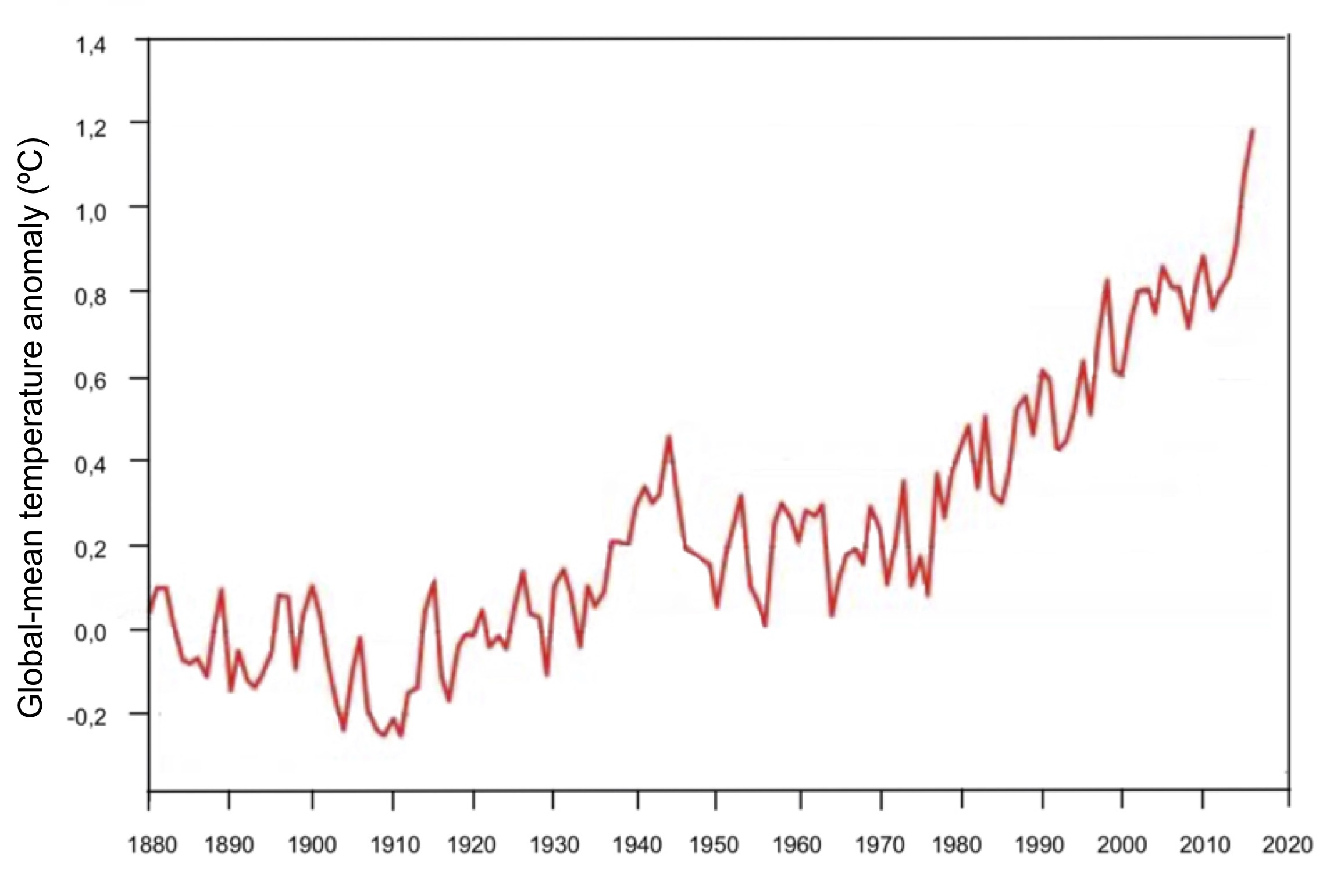 Figure 1. Evolution of global mean surface temperatures from the pre-industrial era to the present day. The anomalies indicated represent the temperature differences in °C compared to normals calculated for the period 1951–1980.

The inability to reach this goal of “2 degrees maximum” is really worrying, as this target represented a political compromise aimed at limiting the damage caused by climate change, not at preventing it. Numerous modelling by climatologists show that each additional degree increases the risk, frequency and magnitude of the direct consequences of warming, whether in terms of extreme weather events (droughts, heat waves, hurricanes, rising of the sea level) or of its direct impact on terrestrial life (extinction of species, fall in agricultural yields, increase of infectious diseases, etc.). According to the recent work of the Intergovernmental Panel on Climate Change (IPCC), the limit of global warming should rather be around 1.5 °C to hope to avoid the main consequences of climate change. With an increase already reaching 1 °C and possibly 3 °C by the end of this century, we are on a trajectory that goes well beyond this “safety threshold” and it seems inevitable that we will be confronted, in the short and medium term, with the potentially dangerous consequences of global warming.

Health impacts
Recent analyses (here and here, for example) clearly show that the effects of climate change on health are already beginning to be felt. Figure 2 summarizes the main damage caused by global warming: diseases, injuries and deaths caused by extreme weather events (floods, heat waves, etc.), respiratory and cardiovascular diseases associated with increased air pollution, increased intoxication caused by deterioration of water quality and certain foodstuffs, malnutrition due to reduced agricultural yields, increase in insect-borne diseases, and mental health problems caused or aggravated by societal changes due to climate change (migrations, conflicts) (Figure 2). According to estimates by the World Health Organization, these phenomena caused by climate change could be responsible for about 250,000 additional deaths per year between 2030 and 2050. 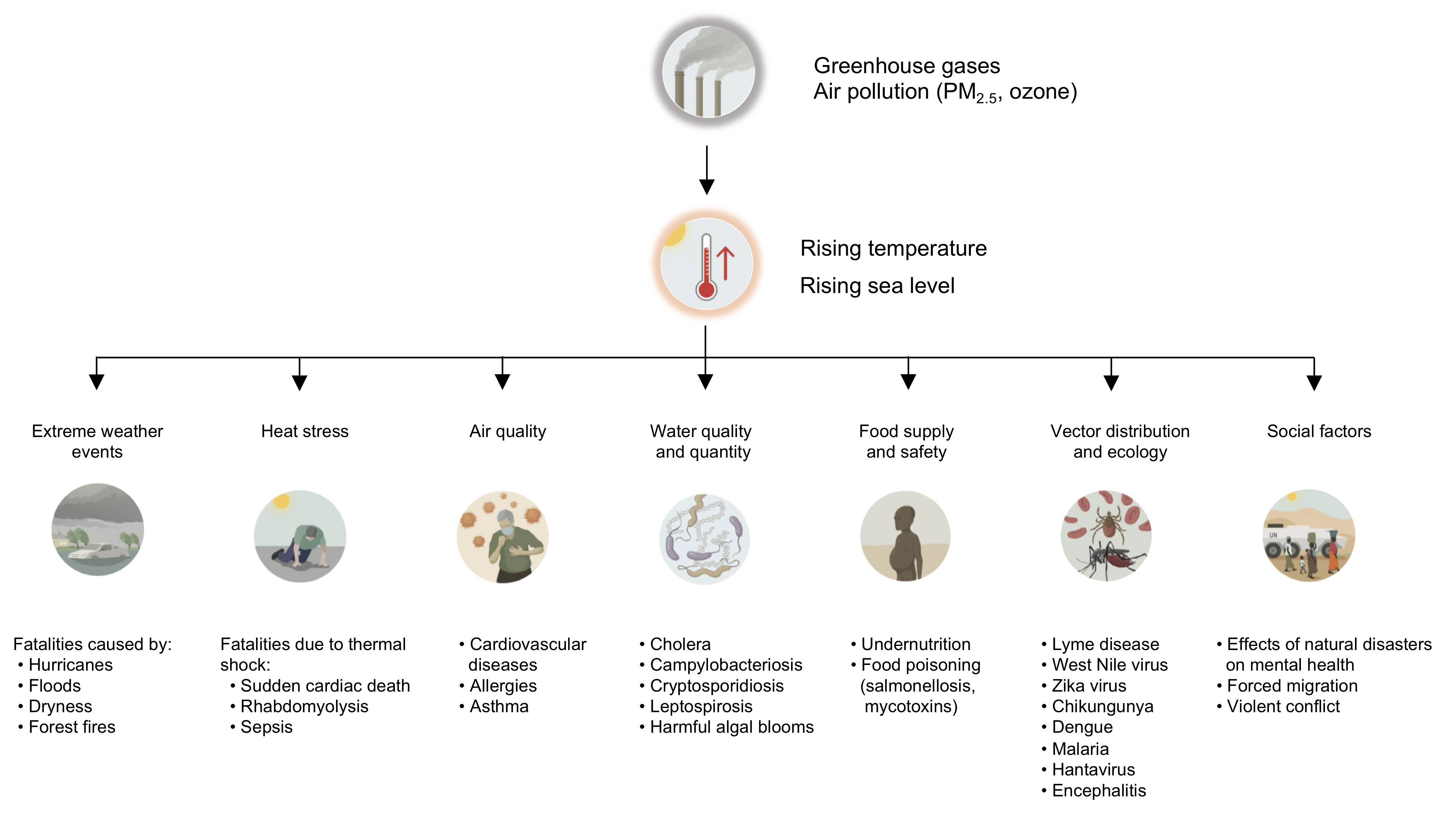 Figure 2. Main consequences of climate change on health. Adapted from Haines and Ebi (2019).

Extreme weather events
Rising greenhouse gas emissions add energy to the climate, increasing the frequency, intensity and duration of extreme events such as heat waves, droughts and floods. According to the Center for Research on the Epidemiology of Disasters, the number of disasters caused by storms and floods has increased annually by 7.4% in recent decades. In 2017, a total of 712 extreme weather events were reported, generating an estimated cost of US $326 billion, nearly triple the losses recorded in 2016. Nearly half of the world’s population lives within 60 km of the sea and it is estimated that the number of people at risk of flooding could rise from 75 million currently to 200 million in 2080 if the rise in sea level of 40 cm (15 ¾ inches) predicted by the current models is realized. It should be noted, however, that this increase could be much greater and reach several metres if the Antarctic ice sheet is destabilized and/or that of Greenland disappears as a result of global warming.

Extreme heat
Several studies have reported an increase in mortality associated with extreme heat episodes, the best documented being those that have affected large urban areas such as Chicago in 1995 (740 deaths), Paris in 2003 (4,867 deaths), and Moscow in 2010 (10,860 deaths). Cities are particularly vulnerable to heat waves due to the “heat island” effect that generates temperatures 5 to 11 °C higher than neighbouring rural areas. If the current trend continues, it is expected that by the end of the century, extreme heat mortality could increase from 3 to 12% in the southern United States, Europe and Southeast Asia.

As mentioned in another article, extreme heat increases the risk of mortality when the temperature exceeds the thermoregulatory capacity of the human body and reaches 40 °C. Under these conditions, massive redistribution of blood to the body surface causes internal organs such as the heart to be insufficiently irrigated (ischemia) and stop functioning. Thermal shock and ischemia also promote the infiltration of pathogens into the blood and the development of a systemic inflammatory response that damages the organs (sepsis) and can also cause the disintegration of muscle fibres (rhabdomyolysis), releasing myoglobin, which is very toxic to the kidneys. Older people are particularly vulnerable to extreme heat, with a significant increase in mortality observed when the maximum temperature exceeds 5 degrees and above normal temperature (Figure 3). At the MHI EPIC Centre, a research team led by Dr. Daniel Gagnon, PhD, is studying the impact of extreme heat on the elderly and heart patients. 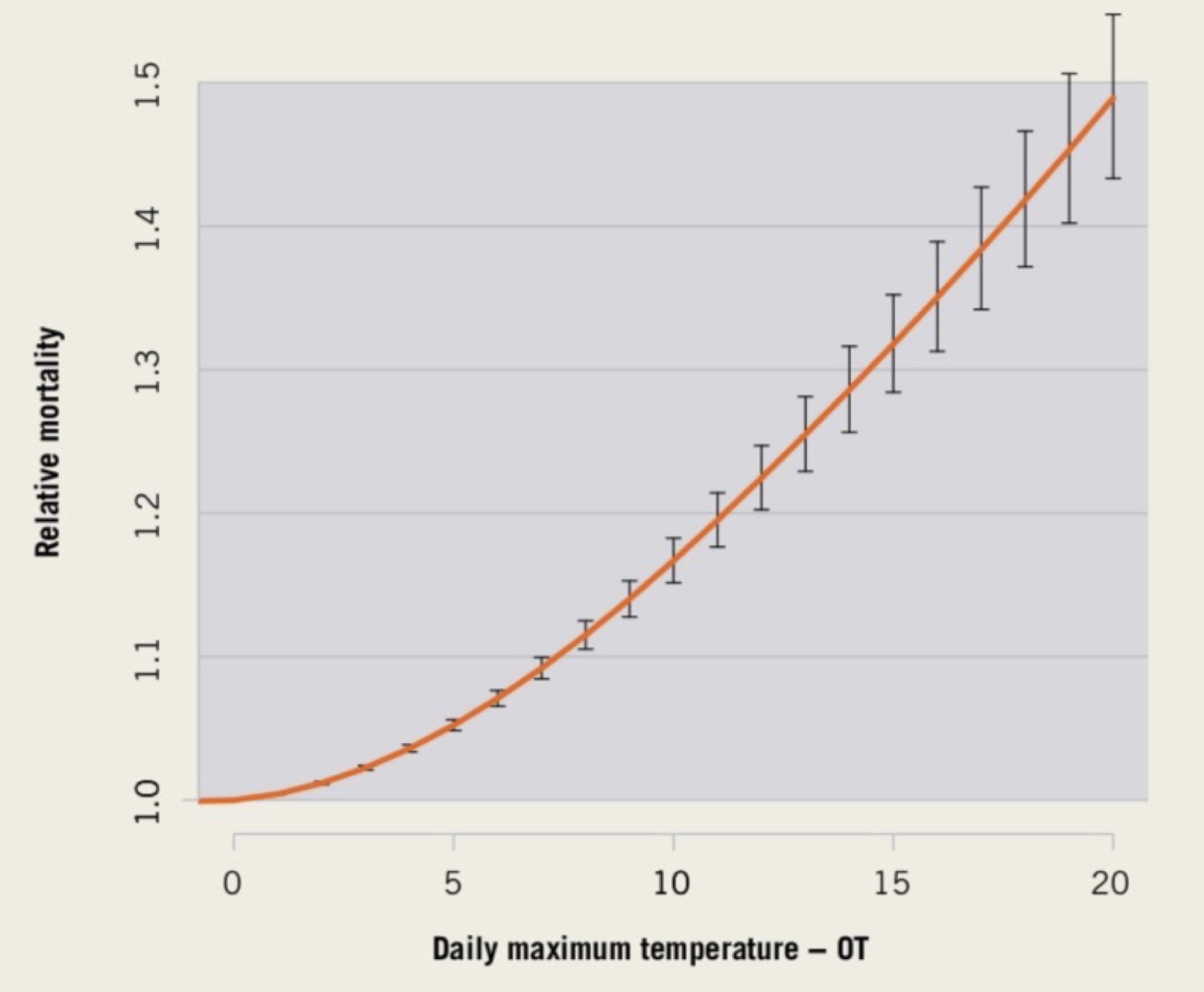 Figure 3. Increased risk of mortality among people aged 65 and over caused by heat exceeding normal temperatures. From WHO (2014).

Deterioration of air quality
It is estimated that the fine particles present in air pollution are currently responsible for about 9 million premature deaths worldwide, plus 1 million deaths from low altitude (tropospheric) ozone. The lungs are obviously the organs most exposed to air pollution, and people who live in polluted areas are more at risk of developing lung diseases. However, cardiovascular disease is the greatest consequence of the deterioration of air quality, accounting for about 80% of all deaths caused by ambient air pollution. Fine and ultrafine particles inhaled by the lungs reach the bloodstream where they cause an inflammatory reaction and oxidative stress that damage the lining of the vessel walls and increase the risk of cardiovascular events, especially in people who are already at risk (existing coronary heart disease, advanced atherosclerosis). It goes without saying that without a significant reduction in polluting emissions, these premature deaths will increase over the next few years, especially since certain consequences of climate change such as forest fires can further increasethe levels of air pollution by more than 10 times.

Impact on food supply
Higher temperatures, changes in precipitation cycles, and extreme weather events caused by climate change can greatly affect food production. Several countries are already experiencing declining agricultural yields, particularly in Africa and Southeast Asia, mainly because of prolonged periods of drought. Rising temperatures also have an impact on food safety: in Europe, for example, above-normal temperatures account for about 30% of salmonellosis cases and the incidence of food poisoning is strongly associated with a rise in temperatures in the previous 2 to 5 weeks.

It should also be noted that several recent studies (here, here and here, for example) have shown that the increase in atmospheric CO2 concentrations is associated with a decrease in the nutritional quality of some important crops such as rice and wheat, lowering protein levels, several micronutrients (zinc and iron in particular) as well as B vitamins. According to a recent analysis, if, as expected, the atmospheric concentration of CO2 exceeds 550 ppm over the next decades, 175 million people could have a zinc deficiency and 122 million people a protein deficiency (mainly in Southeast Asia, Africa and the Middle East).

Increase in vector-borne zoonotic diseases
According to the Intergovernmental Panel on Climate Change, the increased risk of transmission of infectious diseases through vectors such as mosquitoes and ticks is one of the most likely consequences of climate change. Global warming is promoting the geographical expansion of many of these vectors, including Aedes aegypti and Aedes albopictus mosquitoes, which are responsible for the transmission of arboviruses such as dengue, chikungunya, yellow fever and Zika; mosquitoes of the genus Culex, which are responsible for Nile virus transmission; and some ticks such as Ixodes scapularis, the vector for the bacterium Borrelia burgdorferi responsible for Lyme disease.

The emergence of Lyme disease in southern Canada, including southern Quebec, is a particularly worrying example of the consequences of global warming. Originating in New England (the disease was first described in the town of Lyme, Connecticut, hence its name), the tick responsible for the transmission of this disease began to be detected in southeastern Canada in the early 2000s. This expansion of I. scapularis tick territory to the north, at a rate of approximately 33 to 55 km per year, is strongly correlated with rising temperatures that now allow the tick to complete its life cycle. As a result, the annual incidence of Lyme disease in Canada has soared in recent years, from 40 cases in 2004 to nearly 1,000 cases in 2016 (Figure 4). 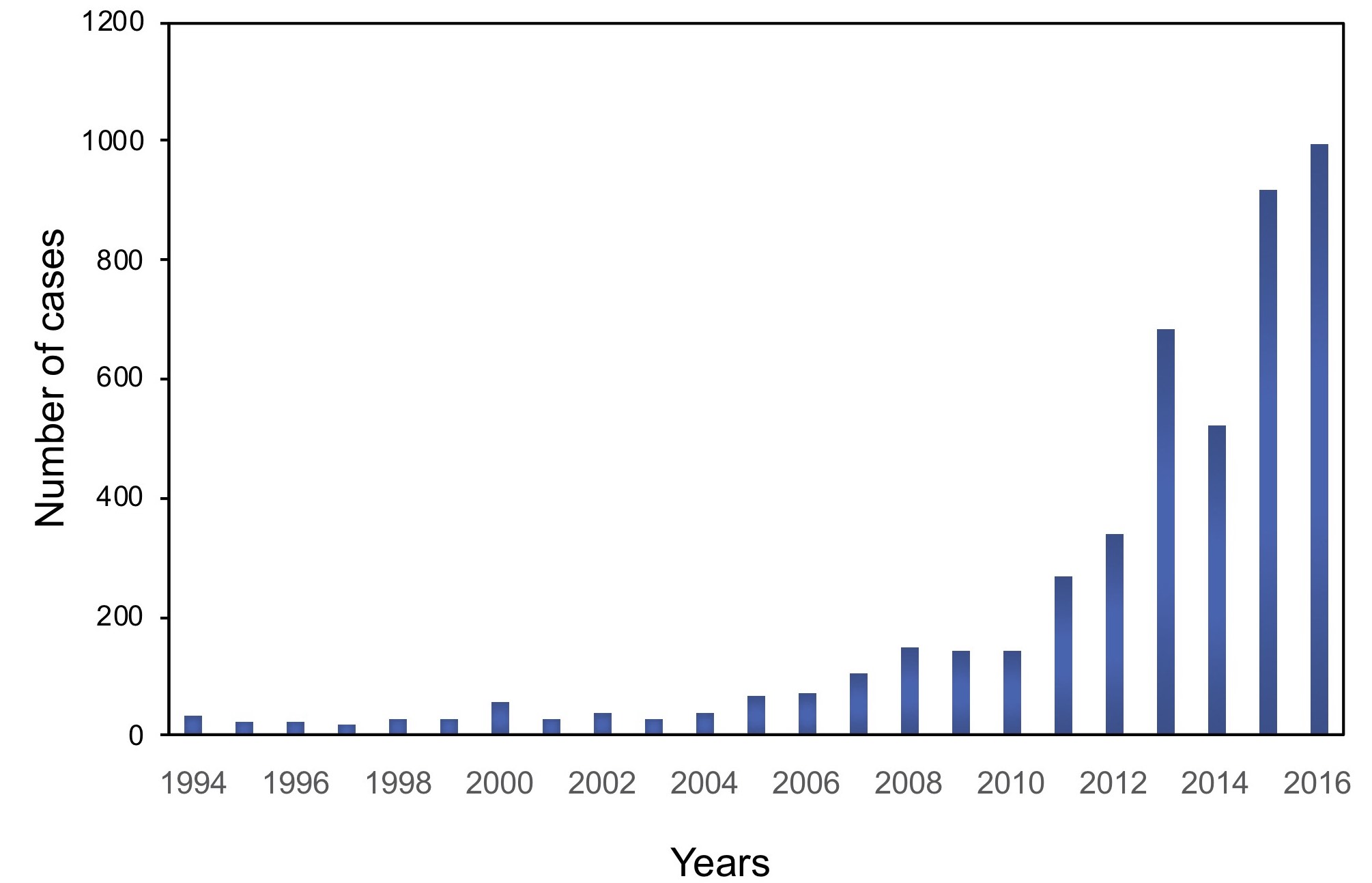 Climate change is likely to have a similar impact on the risk of Nile virus infection and may even promote the emergence of diseases transmitted by arbovirus vectors (Aedes aegypti andAedes albopictus). For example, according to current models, Ae. albopictus will be present in 197 countries by 2080, including Canada, potentially exposing these populations to infectious diseases (dengue, for example) that were until now exclusively present in warmer countries.

In short, it is clear that if nothing is done, the negative effects of climate change on human health will increase, especially among populations that are vulnerable to global warming because of their geographical location (floods, drought, heat waves). But even when disasters occur elsewhere, they can nevertheless greatly influence life here, whether in economic terms (disruptions in the production of goods and services, lower agricultural yields) or social terms (massive migrations, armed conflicts). It is therefore all of humanity that is facing the climate crisis, and we can only hope that concrete actions will be quickly implemented to reduce greenhouse gas emissions.