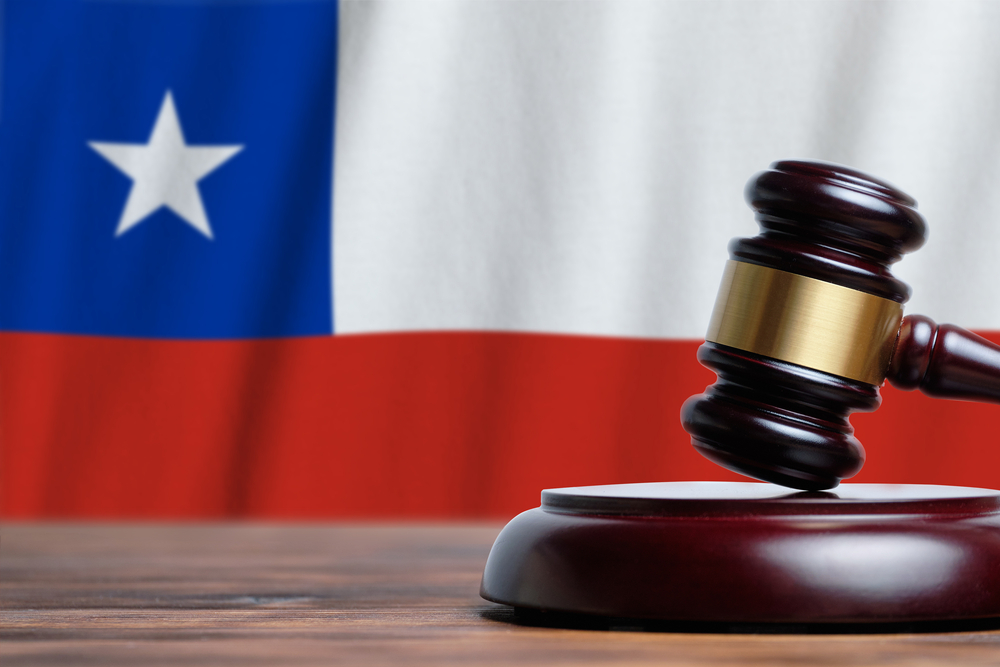 Chile, an example of aggressive state intervention to combat the obesity epidemic

From a medical point of view, one of the greatest upheavals of the 20th century was certainly the dramatic increase in the body weight of the world population. Globally, recent estimates indicate that about 2 billion adults are overweight (BMI between 25 and 30), including 650 million who are obese (BMI> 30), about three times more than in 1975. This very rapid increase in the proportion of overweight people has several consequences on the health of the population because overweight and obesity are associated with significant increases in the incidence of several chronic diseases, including cardiovascular disease, type 2 diabetes and several types of cancer, that reduce healthy life expectancy. In addition to these chronic diseases, the COVID-19 pandemic has also shown that obesity is associated with an increased risk of developing serious complications of the disease and of dying from it. The increase in the number of overweight people is therefore one of the main public health problems of our time and is in the process of erasing the gains achieved as a result of the sharp decline in smoking in recent years.

From undernutrition to overnutrition
This rapid increase in the incidence of obesity is observed globally, but has been particularly noticeable in low- and middle-income countries. Until the late 1970s, the main nutritional problem faced by these countries was the high food insecurity of their populations and the high proportion of children suffering from malnutrition. With the globalization of trade that began in the 1980s, the standard of living of these populations began to resemble more and more that of richer countries, both for some of its positive aspects (access to safe drinking water, hygiene, reduction of infectious diseases and infant mortality, education) as well as for its negative ones (sedentary lifestyle, diet based on ultra-processed foods and fast food).

The result is that all countries, without exception, that have adopted these new eating habits and the Western way of life now have to deal with a greater proportion of obese individuals. In poorer countries, this “nutritional transition” has been so rapid that the increase in the body weight of the population can also coexist with malnutrition. For poor people, the high availability and low cost of ultra-processed foods provide for their energy needs, but the lack of nutrients in these foods means that the excess of calories ingested is paradoxically accompanied by a nutritional deficiency. While this may seem surprising at first glance, overnutrition and undernutrition can therefore occur simultaneously in a population, sometimes within the same family.

Latin America hit hard
Latin America is probably one of the best examples of the impact of these dietary changes on the incidence of obesity and the diseases associated with being overweight. Mexico, for example, was the country that experienced the largest increase in obesity globally between 1990 and 2010, and in 2014, more than 300 million adults living in Latin America were overweight, including 100 million who were obese. The situation may even worsen over the next few years due to the high incidence of childhood obesity, which reaches, for example, 12% in Chile and 11% in Mexico (a percentage similar to that of Canadian children, among the highest in the world).

The economic growth of the 1990s led to a rush for typical North American products such as fast food, televisions and cars, leading to increased calorie intake and a parallel decrease in physical activity levels. The very high consumption of ultra-processed foods, in particular sugary drinks, is certainly one of the new eating habits that contribute to the increase in overweight of the inhabitants of these regions. Globally, three of the four countries consuming the highest number of calories in the form of sugary drinks are in Latin America, with Chile and Mexico in first and second place, followed by Argentina in fourth place just behind the United States (Figure 1). 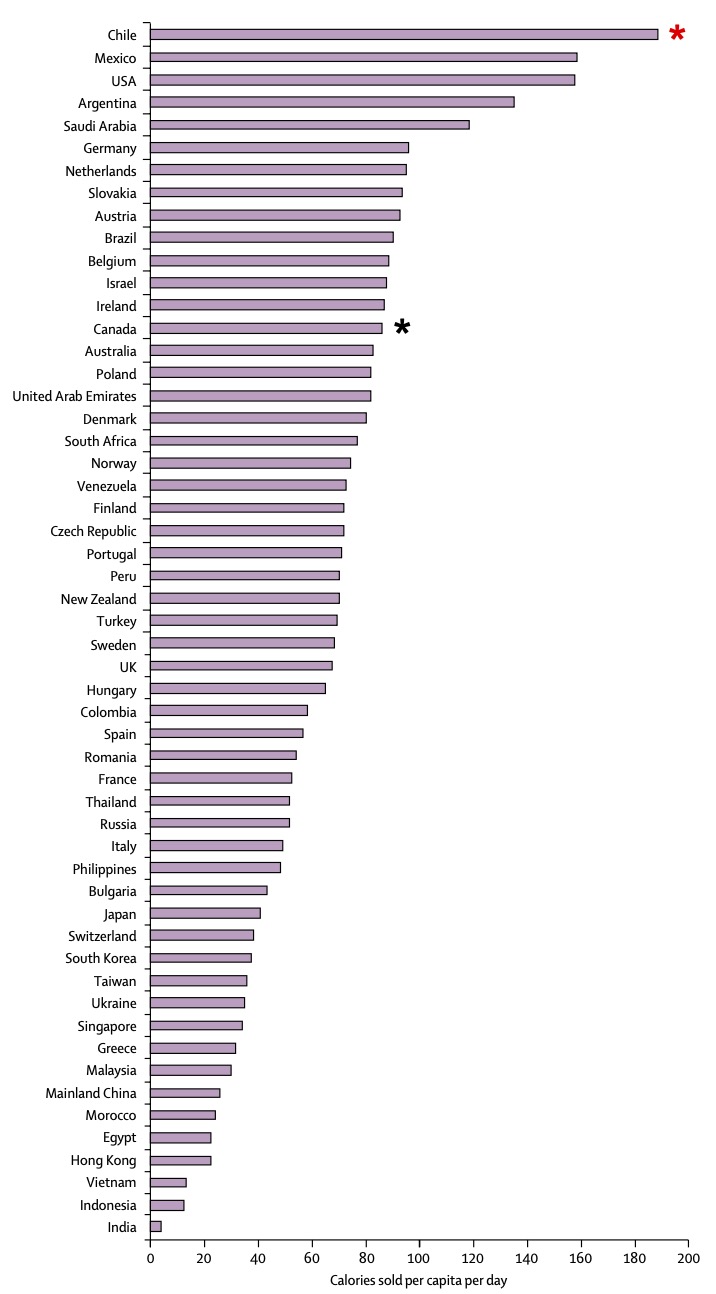 Figure 1. Comparison of the number of calories from sugary drinks sold in different countries in 2014. Note the very high consumption of these drinks in Chile (red asterisk), more than twice as high as in Canada (black asterisk). From Popkin (2016).

Several studies indicate that this overconsumption of added sugars is generally associated with a poor quality diet (low in nutrients) and significantly contributes to the development of obesity, type 2 diabetes and cardiovascular disease. This is especially true in Latin America, as some studies indicate that in the presence of a high sugar intake, some people of Hispanic descent are genetically predisposed to develop nonalcoholic fatty liver disease, an abnormal buildup of fat in the liver that is closely related to the development of type 2 diabetes and metabolic syndrome.

Government response
The close link between the consumption of ultra-processed foods and the increased risk of obesity illustrates the chasm between the financial interests of the multinational food companies that manufacture these products and the health of the population. The goal of these companies is obviously not to make people sick, but it is undeniable that their primary goal remains to generate profits, without worrying too much about whether the consumption of their products can lead to the development of a large number of chronic diseases.

Governments do not have this luxury, however, as they have to deal directly with the enormous pressures that diseasesassociated with being overweight place on health systems. A simple and straightforward approach that has been adopted by several countries is to introduce a tax on these industrial food products, in particular soft drinks. The principle is the same as for all taxes on other unhealthy products such as alcohol and tobacco, i.e. higher prices are generally associated with lower consumption. Studies that have examined the impact of this approach for soft drinks indicate that this is indeed the case, with decreases in consumption observed (among others) in Mexico, Berkeley (California) and Barbados. Despite the legendary reluctance of politicians to impose new taxes, there is no doubt that this approach represents a promising tool, especially if the amounts collected are reinvested in order to improve the diet of the population (subsidies for the purchase of fruits and vegetables, for example).

Another, even more promising, approach is to help consumers make an informed choice by informing them of the sugar, fat, salt and calorie content of products. This information currently exists, but in the form of nutritional labels that are quite difficult to interpret. The amounts of sugar, saturated fat, sodium and calories are indeed indicated on these labels, but refer to percentages of the recommended daily intake. For most people, seeing that the sugar content of a particular food is, for example, “15% of the recommended intake” is a rather abstract concept that does not specify whether this amount is low, adequate or too high. A simpler and more straightforward way is to clearly indicate on the front of the product whether it is high in sugar, fat or salt, as is the case in Chile. In response to the rampant rise in obesity in its population, the country’s Ministry of Health has introduced a labelling system, featured on the front of the package, which allows consumers to immediately see whether a product contains high amounts of sugar, saturated fat, sodium and calories (Figure 2).

These labels help consumers make better choices and can encourage the industry to reformulate their products to escape this labelling and become more attractive. It should be noted that Health Canada has also developed a labelling project of the same type, but the adoption of this practice is still pending, more than two years after the end of public consultations. Mexico, meanwhile, has recently moved forward with a system similar to that of Chile, as have Peru, Uruguay and Israel.

The Chilean approach is part of a comprehensive plan to fight obesity, largely based on changing a food culture that is far too focused on ultra-processed products. In addition to the new labelling system, Chile’s Law of Food Labelling and Advertising introduced in 2016 prohibits the sale of caloric products (ice cream, soft drinks, chips, etc.) in schools, imposes severe restrictions on the marketing of industrial products (elimination of characters loved by children on cereal boxes, ban on sales of candy containing toys, e.g., Kinder), prohibits the advertising of these products on programs or websites aimed at young people, and imposes an 18% tax on sugary drinks, one of the highest in the world. This strong government intervention seems to be paying off: a recent study shows that the consumption of sugary drinks fell 25% within 18 months of the law’s implementation, while that of bottled water increased by 5%. The authorities are now considering expanding the scope of the law by introducing an additional tax on all junk food products.

In North America, we remain extremely passive in the face of the dramatic increase in the number of overweight people in our society. Yet the burden of overweight-related illnesses weighs heavily on our health care system here too, and as mentioned earlier, the future looks bleak as we are now among the world leaders in childhood obesity. The example of Chile shows that governments have concrete legislative means that can be used to try to reverse this trend. Faced with an industry that refuses to self-discipline, the authorities must take a much more aggressive approach to protect the population from the health problems associated with the overconsumption of ultra-processed foods, especially among young people. The risk of obesity is established very early in life, since half of children and adolescents who become obese are already overweight when they enter kindergarten.