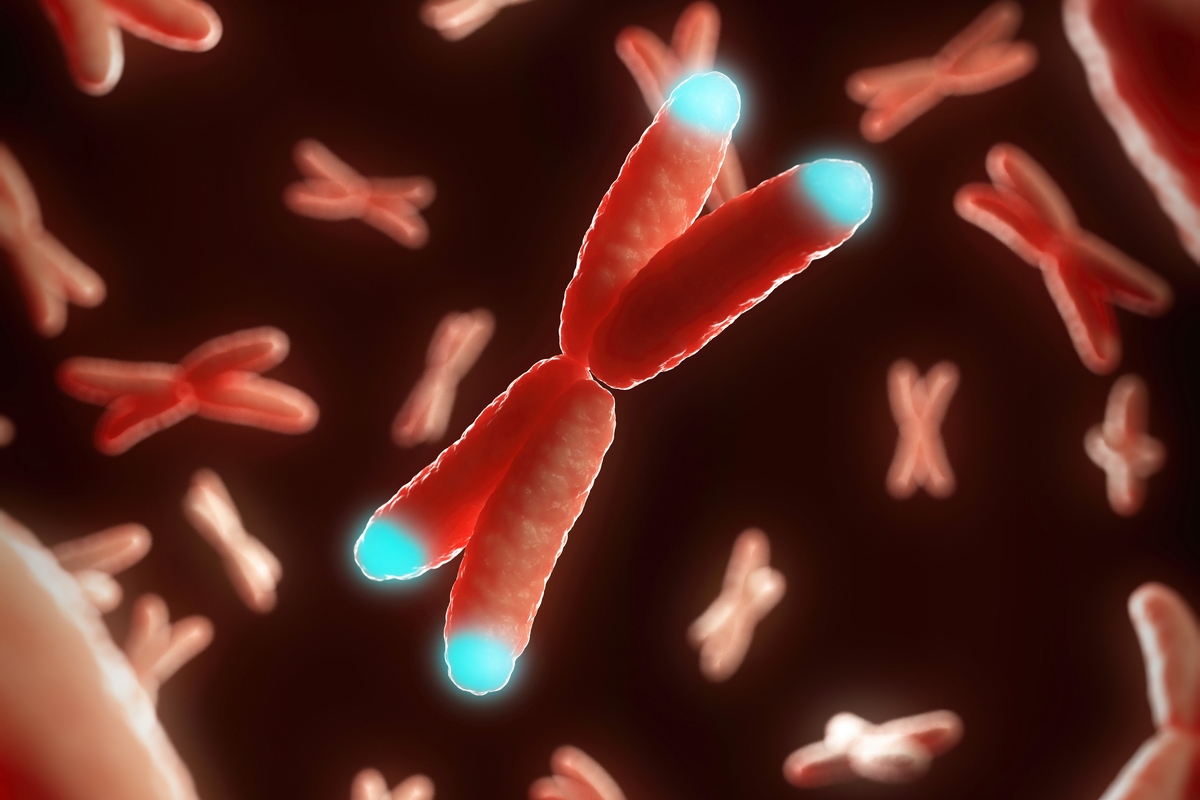 Anti-aging effect of a healthy lifestyle

According to recent studies, adopting a healthy lifestyle, i.e., eating well, exercising, managing stress, and not smoking or drinking too much alcohol, has beneficial effects on the aging of our cells. One of the well-documented phenomena that occur during cellular aging is the degradation of telomeres, unique structures found at the ends of each of our chromosomes; however, a healthy lifestyle can slow down this process

Telomeres and aging
Telomeres are repetitive DNA structures, shaped like a “hairpin”, found at both ends of chromosomes and that ensure the integrity of the genome during cell division. At each division, the telomeres shorten until they become too short to fulfill their protective function: the cell can no longer divide and enters senescence, then dies. Telomere shortening is countered by the action of telomerase, an enzyme that lengthens telomeres during each DNA replication. Telomere shortening in peripheral blood mononuclear cells (lymphocytes and monocytes) is associated with aging and aging-related diseases such as cancer, stroke, dementia, cardiovascular disease, obesity, osteoporosis and type 2 diabetes. Leukocyte telomere length is significantly, albeit weakly, associated with mortality, but cannot predict survival as well as other variables (age, mobility, cognition, smoking, daily life activities).

Physical activity
Physical training improves many aspects of human health, including exercise capacity, blood pressure regulation, insulin sensitivity, lipid profile, reduction of abdominal fat and inflammation. These beneficial effects contribute to increased endothelial function, delay the progression of atherosclerotic lesions, and improve collateralization of blood vessels in people with type 2 diabetes, coronary artery disease and heart failure. The underlying mechanisms are known in part, but details at the molecular level are less well known and are the subject of much research.

The process of cellular aging can be slowed down by sustained exercise. A study published in 2009 showed that sustained physical training in young and middle-aged athletes was associated with higher telomerase activity, increased expression of telomere-stabilizing proteins, and longer telomeres, compared to sedentary people.

The same research group recently conducted a randomized controlled trial to demonstrate that exercise is the cause of increased telomerase activity and telomere length. The results of the study were published in 2018 in the European Heart Journal. The researchers recruited 124 middle-aged men and women (≈50 years) who were in good health, but did not exercise. During the six-month study, participants were randomly divided into four groups: a control group and three groups that did different types of exercise 3 times a week; one group did endurance training (walking/running, 45 min/day); another group exercised at high intensity intervals (4 min at high intensity/4 min rest, repeated 4 times); and the third group did resistance exercises (various weight machines). Blood samples were taken before, during, and at the end of the study to measure telomere length and telomerase activity in leukocytes (white blood cells).

At the end of the study, those who exercised, regardless of the type, had better cardiorespiratory capacity than at the beginning of the study. Telomerase activity was 2–3 times higher in the leukocytes of those who did endurance or interval exercises, compared to the control group. However, this effect was not observed in people who did resistance exercises (weight training). Similarly, telomere length was greater in those who did endurance or interval exercises, but not in those who did resistance exercise.

Proteomic approach to the effects of exercise
Researchers have studied the effects of endurance exercise on the expression of 1,129 proteins in the blood plasma (plasma proteome), classified into 10 modules or patterns according to their level of interconnection. Exercise altered protein expression of four modules in young men, and five modules in older men. Modules affected by the exercise included proteins related to signalling pathways involved in wound healing, apoptosis (cell death) regulation, glucose, insulin and cellular stress signalling, as well as immune and inflammatory responses. In addition, several exercise-affected modules could be correlated with physiological and clinical indicators of a healthy life, including diastolic blood pressure, insulin resistance, maximal aerobic capacity, and vascular endothelial function.

Diet
According to a systematic review of studies published on the subject, five studies indicate that fruit and vegetable consumption is associated with longer telomeres, while eight other studies have not identified a significant association. For foods other than fruits and vegetables, including grains and meats, the data are inconclusive as a whole. Some studies, however, indicate unfavourable associations between certain food groups and the length of telomeres: grains, processed meats, sugary drinks, fats and oils. With regard to eating habits, only the Mediterranean diet has been associated with longer telomeres, but not in all the studies published to date. Future larger-scale observational studies and more focused randomized controlled trials could help to better identify which elements of the diet are beneficial for telomere maintenance and help slow the process of cellular aging.

Effect of stress
Several cross-sectional studies have reported associations between telomere stability and stress exposure (review articles here, here and here). The association lasts throughout life and has been observed in children whose mothers had been under significant stress. It seems that even prenatal stress indirectly experienced by the fœtus is associated with shorter telomeres after birth. Prolonged or repeated exposure to stress is associated with a shortening of telomeres and the development of age-related diseases such as type 2 diabetes, heart disease, dementia and osteoarthritis. According to some studies, people with bipolar disorder, schizophrenia, major depression and post-traumatic stress disorder have shorter telomeres. Stress and mental illnesses therefore have direct effects on the aging of our cells, with consequences for health over the course of life.

Global lifestyle
For men diagnosed with low-grade prostate cancer, adopting a completely different and healthy lifestyle (plant-based, low-fat diet, exercise, stress management, social support) has been associated with a 10% increase in telomere length in their lymphocytes and monocytes, five years after the start of the intervention. Participants in the control group (active surveillance only), on the contrary, saw the average length of their telomeres decrease slightly (-3%). This intervention study included only a small group of people (n = 30), so larger-scale randomized controlled trials are needed to confirm these findings.

There is growing evidence that physical activity has a significant influence on health and quality of life as people age. For example, older people who exercise regularly are often in better shape, they are more muscular, and they are less likely to develop chronic illnesses or physical disabilities than sedentary seniors. Adopting a lifestyle that combines healthy eating, regular exercise and stress management is certainly one of the best things one can do to prevent or fight age-related diseases.