Recreational physical activity is associated with a reduction in the risk of cardiovascular disease, cancer and all-cause mortality. For this reason, and also to improve cardiorespiratory endurance, muscle and bone condition, and reduce the risk of noncommunicable diseases and depression, the World Health Organization has made the following recommendations regarding physical activity:

These recommendations are widely recognized and promoted by public health authorities and the medical community, but they are not very specific regarding the frequency of exercise. For example, the first two recommendations can be met with 30 minutes of moderate exercise for 5 days or 75 minutes of sustained intensity exercise in a single session. Do we obtain as many benefits in the second case as in the first? This question is important because in our modern societies where work and family responsibilities are demanding, physical activity is increasingly practiced on weekends only. People who choose to do all their exercises in 1 or 2 days are known colloquially as “weekend warriors.”

The first study that focused on physical activity patterns was published in 2004. In this study, the 8,421 men in the cohort were classified into four groups: “sedentary” (<500 kcal/week), “insufficiently active” (500–599 kcal/week), “weekend warriors” (≥1000 kcal/week, in 1 or 2 sports sessions/week), and “regularly active” (≥1000 kcal/week). Compared with sedentary people, the relative risk of all-cause mortality was reduced by 25% for “insufficiently active” participants (those who exercise less than recommended), 15% for “weekend warriors”, and 36% for regularly active participants. These results indicate that there is a benefit to exercise performed in a day or two, but perhaps not as much as regular exercise. Further analysis of the data indicates that among participants who had no major risk factors, weekend warriors had on average 59% less risk of dying prematurely than sedentary participants. On the other hand, this was not the case for people who had at least one major risk factor (smoking, excess weight, hypertension, hypercholesterolemia) since among them weekend warriors had the same risk of dying prematurely as sedentary people. Only regularly active men had a lower risk (-39%) of premature mortality among people who had at least one major risk factor. 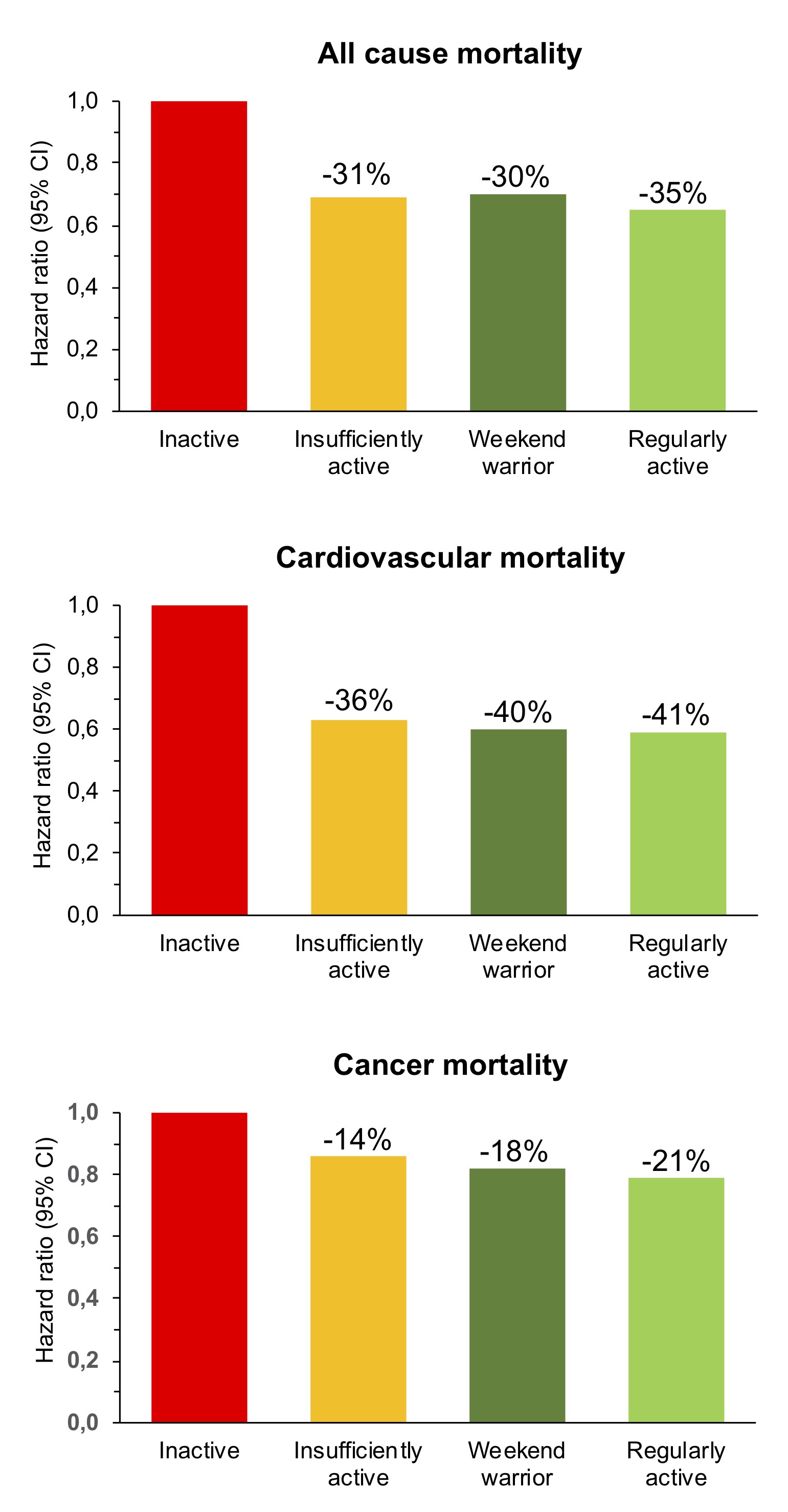 In an editorial published shortly thereafter in the British Journal of Sports Medicine, the authors of the British study conducted additional analyses to determine how much physical activity insufficiently active participants had to do to derive health benefits. There does not appear to be a dose-response relationship between the amount of moderate to vigorous physical activity and all-cause mortality for insufficiently active participants. On the other hand, there is a significant linear relationship between the total amount of activity (of any intensity) and the risk of all-cause mortality. These results suggest that some of the benefits observed in insufficiently active individuals may be due to non-exercise-related physical activity, such as low-intensity walking.

In cross-sectional analyses, the authors observed a clear dose-response association between several traditional risk factors (HDL cholesterol, glycated haemoglobin , fibrinogen, C-reactive protein, body mass index, blood pressure, cardiorespiratory fitness) and the level of moderate to vigorous physical activity. The most favourable risk factor profile was systematically observed among regularly active participants (those who do the minimum recommended physical activity in more than 2 sessions per week) and to a lesser extent among weekend warriors.

The cardiorespiratory fitness of weekend warriors in this study was only slightly worse than that of regularly active participants. This is not surprising when we know that most weekend warriors do vigorous physical activity (94% participate in vigorous sports), which suggests that the intensity of physical activity could be as important as quantity. However, there are still good reasons to exercise daily or more regularly than weekend warriors, including a lower risk of musculoskeletal injuries and benefits for cognition and mood.