The pros and cons of alcohol

Even though alcohol has been a daily part of human existence for millennia, this substance is far from innocuous and in fact has very complex effects on health. This complexity is clearly evidenced by the J-shaped relationship between the quantity of alcohol consumed and the risk of premature death (Figure 1). Indeed, a meta-analysis of numerous studies conducted on this topic shows that daily consumption of small quantities of alcohol (2 glasses for men and 1 glass for women) is associated with a significant reduction (about 20%) of the risk of premature death compared to non-drinkers. However, this window of protection is very narrow: for example, a daily alcohol intake of about 30 g of alcohol by women, which corresponds to two glasses, is sufficient to cancel out almost all positive effects associated with alcohol. In higher quantities, the protective effect of alcohol disappears completely and gives way to a rapid increase of the risk of premature death. A more recent study conducted among 333,247 Americans yielded similar results, with a 20% decrease of the risk of all-cause mortality in light to moderate drinkers compared to people who have never had a drink. 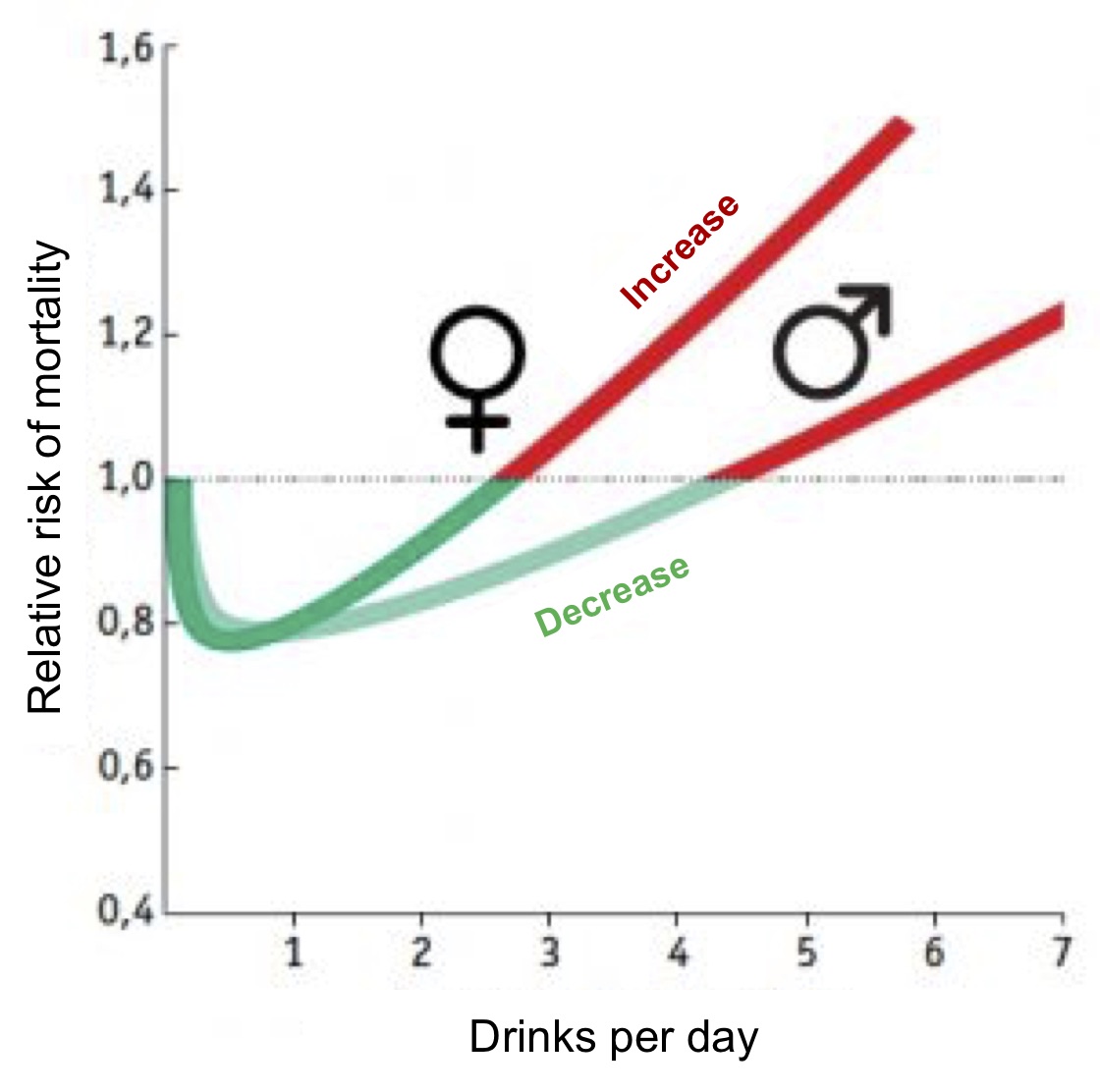 As a reminder, what is commonly considered a “glass” or a “standard drink” refers to the quantity of an alcoholic beverage that leads to the absorption of about 12 to 15 grams of pure alcohol (Table 1). The size of a glass thus depends directly on the alcohol content of the beverage consumed.

However, the protective effect of low levels of alcohol on mortality has been called into question by a major study recently published in The Lancet. In this study, which analyzed the alcohol consumption habits of about 600,000 drinkers, the authors did not observe a decrease in mortality, even at low levels of alcohol, but rather a significant increase of the risk of premature death starting at 100 g of alcohol per week, which only equals one glass per day (Figure 2). According to the authors, these results suggest that the alcohol quantities that are currently recommended (1 glass per day for women, two for men) are too high and these limits should be lowered. Another study, also published in The Lancet, draws similar conclusions, specifically that intake as low as only one glass per day is associated with a higher risk of developing any one of the 23 diseases associated with alcohol consumption, and, according to the authors, that there does not appear to be a safe level of alcohol consumption. Nevertheless, as some specialists have pointed out, this approach is a bit “absolutist”, since the increased risk observed at low levels of alcohol was extremely low, going from 0.914 per cent in non-drinkers to 0.918 in those that consumed one glass a day and to 0.977 in those who drank two glasses. Therefore, for moderate drinkers, the actual risk associated with alcohol consumption is for all intents and purposes negligible. 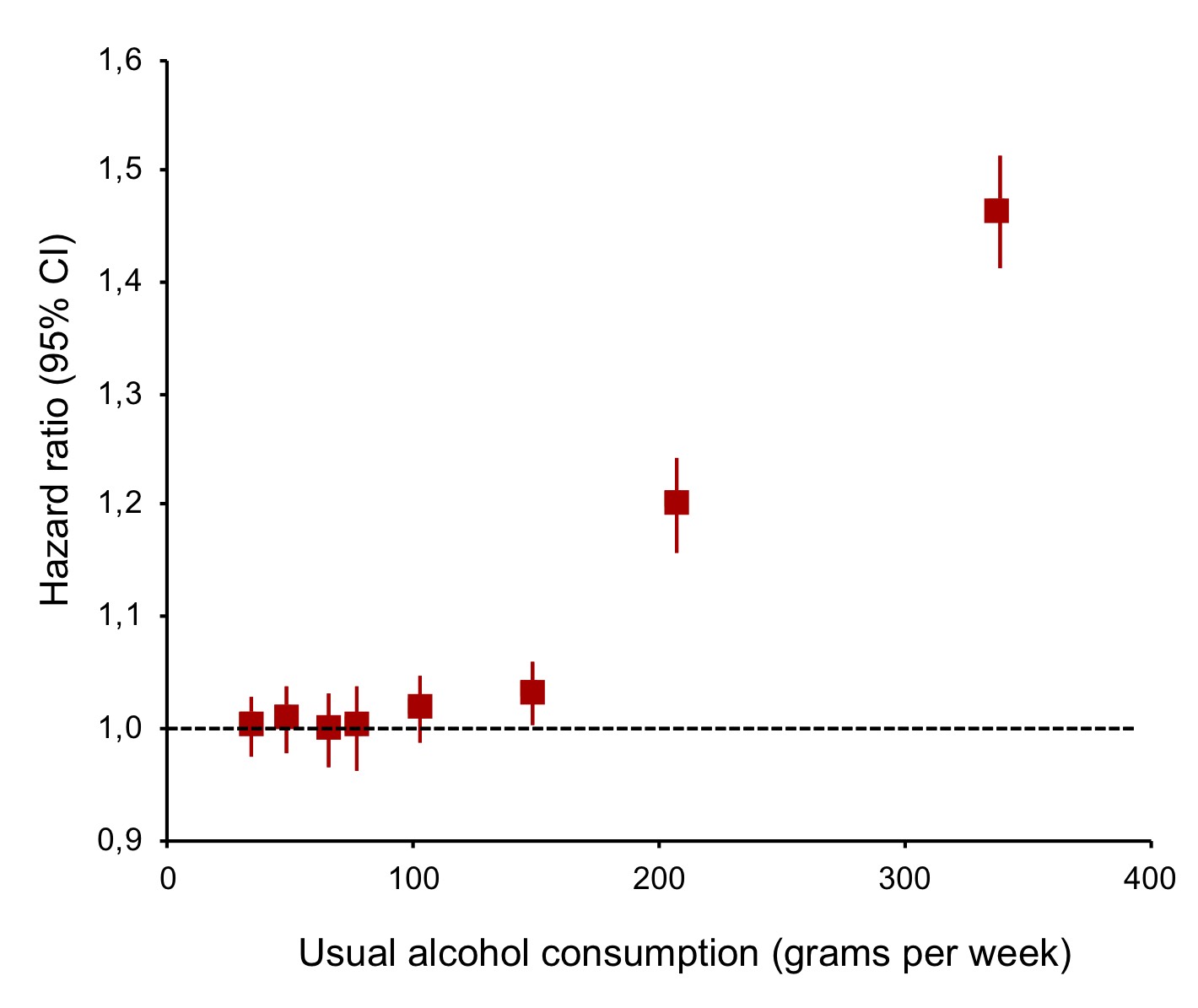 Figure 2. Relationship between alcohol consumption (in g per week) and the risk of premature death, based on an analysis of 83 epidemiological studies among 600,000 participants. Adapted from Wood et al. (2018).

At this stage, it is difficult to say whether these recent studies are superior to previous studies and that moderate alcohol consumption is indeed devoid of any beneficial effects on mortality.  Each epidemiological study has its strengths and weaknesses, and the only true method to resolve this ambiguity is to conduct a randomized clinical study where the health of moderate drinkers could be compared to that of non-drinkers, but such a study is not feasible due to ethical considerations. In any event, a cautious interpretation of all these studies is to state that the negative effects of alcohol should certainly not be trivialized, and that it is important to drink very moderately to take advantage of its potential benefits while avoiding its well-documented harmful effects (Table 2). Historically, the maximum quantities of alcohol considered to be associated with health benefits are 1 to 3 glasses per day for men and 1 to 2 glasses per day for women. At these low levels, alcohol increases levels of HDL cholesterol, improves glycemic control, and has anticoagulant and anti-inflammatory properties, all of which contribute to reducing the risk of a cardiovascular event, notably myocardial infarction. In light of the results of the two studies published in The Lancet, it would seem advisable to slightly lower these limits to 2 glasses a day for men and 1 glass for women.

Above these levels, however, consumption is clearly abusive, since it is associated with an increased risk of several cancers, in particular oral, laryngeal, oesophageal, colon, liver and breast cancer. Chronic consumption of large quantities of alcohol is also associated with several cardiovascular diseases, including atherosclerosis, hypertension, some cardiomyopathies as well as arrhythmias, which considerably increases the risk of cardiovascular mortality. It should also be noted that binge drinking, where large quantities of alcohol are consumed in a short amount of time, is also associated with several harmful effects, in particular a much higher risk of stroke.

Table 2. The different types of alcohol consumption. Adapted from Fernandez-Sola (2015).

Alcohol is thus a formidable double-edged sword, and it is important to limit daily alcohol consumption to low levels, ideally a maximum of 2 glasses a day for men and 1 glass for women, and more than likely a bit less.

Opt for red wine
Red wine is a complex beverage containing several milligrams of phenolic compounds (specifically resveratrol), which are extracted from grape skin during the fermentation process. These molecules have antioxidant, anti-inflammatory, antiplatelet, and vasodilator properties, which suggests that red wine could have more significant positive   effects than those associated simply with the presence of alcohol.

One of the foremost examples of these benefits is the famous “French paradox”, where regularly drinking red wine would be responsible for the low incidence of coronary heart disease observed in France compared to other Western countries, despite a diet high in saturated fats. This beneficial effect is supported by aDanish study, which showed that the risk of premature death was three times lower in moderate red wine drinkers than in those who drink beer or spirits, and also by the results of other studies conducted in Northern California and in Eastern France.

Another argument in favour of choosing red wine is its lower impact on the risk of cancer, possibly due to its resveratrol content. In laboratories, this molecule has one of the most powerful anticancer effects in the plant world and could thus counteract the carcinogenic effect of alcohol. For example, a study showed that whereas the moderate consumption of alcoholic beverages other than wine increases the risk of oral cancer by 38%, this increased risk lowers to only 7% in red wine drinkers.  A similar phenomenon is observed for lung cancer, where moderate wine consumption is associated with a reduced risk of this cancer, whereas consumption of beer and spirits increases the risk. It would thus appear that the greatest decrease in mortality associated with red wine consumption observed in several studies is not only associated with a more pronounced protective effect on the risk of heart disease but also with a less harmful effect on the risk of cancer than other types of alcohol. This phenomenon was also observed in the study published in The Lancet mentioned above. When the authors examined mortality according to the type of alcohol consumed, they observed an enormous difference in risk between wine and other types of alcohol, with red wine consumption (up to 300 g per week) being associated with a slight 10% increase of mortality, which is much lower than that observed in those who drink beer and spirits (Figure 3). 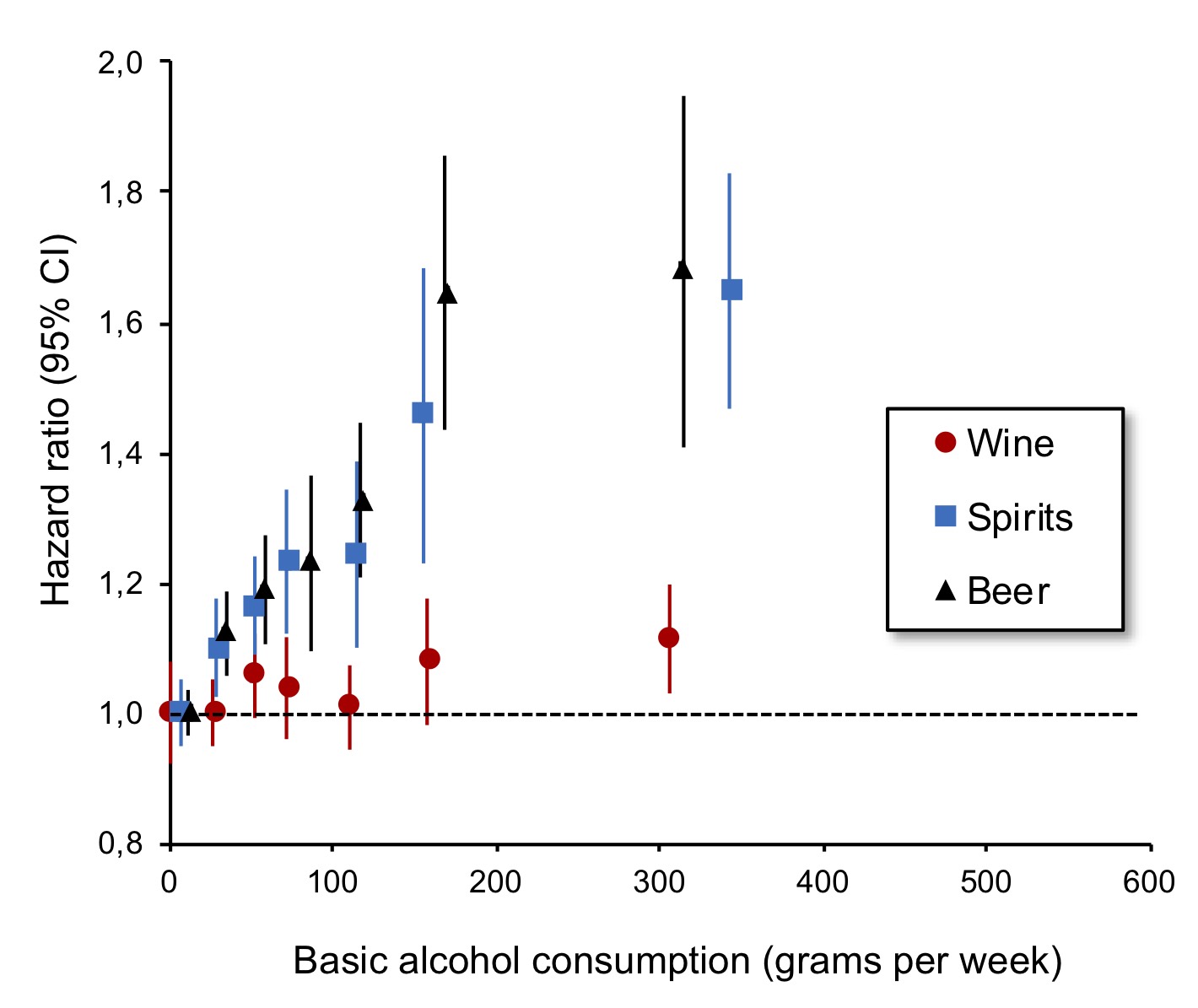 Figure 3. Relationship between type of alcohol consumed (in g per week) and the risk of premature death. Adapted from Wood et al. (2018).

Overall, these observations confirm the results of the INTERHEART study and those of the Akesson group, which show that moderate consumption of alcohol represents one of the lifestyle factors that can contribute to a lower risk of coronary heart disease and early death. A recent study demonstrates to what extent the impact of lifestyle habits can be extraordinary: 50-year-olds who don’t smoke, eat healthy, do 30 minutes or more of daily physical activity, maintain a healthy weight (BMI between 19 and 25), and drink moderately (5-15 g/day for women, 5-30 g/day for men) have 82% less risk of dying from heart disease and 65% less risk of dying of cancer. In practice, this translates to a 14-year increase in life expectancy for women and 12 years for men! Thus, to truly be beneficial, alcohol consumption should be part of an overall healthy lifestyle, including a diet high in plant-based foods, regular physical activity, maintaining a normal body weight, and, of course, not smoking.