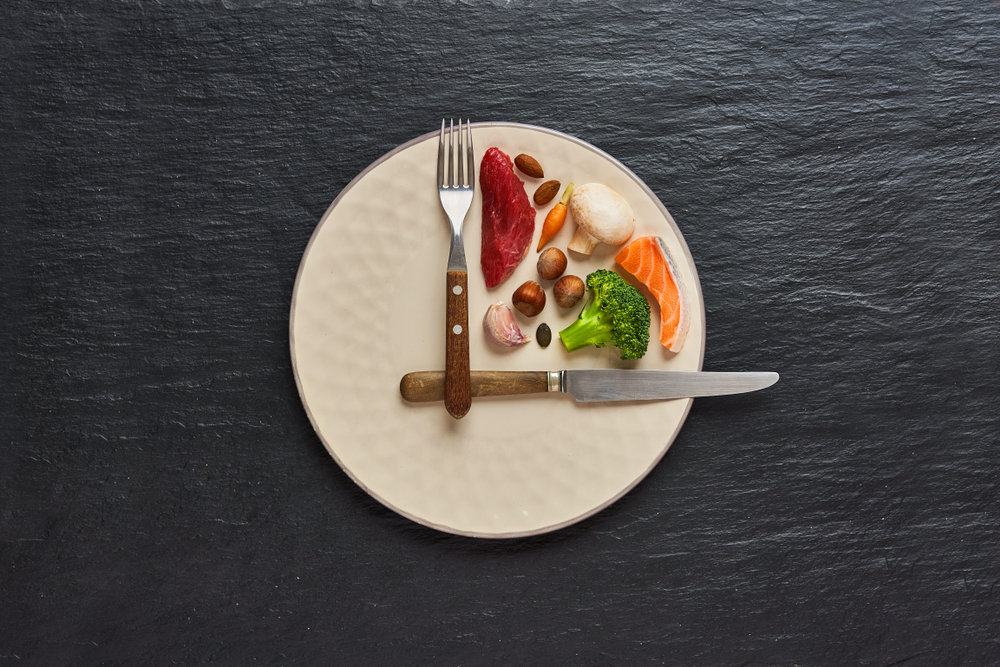 Intermittent fasting has grown in popularity in recent years, as several clinical studies have shown that it can help lose weight and prevent metabolic disease (see also our article: “Intermittent fasting: A new approach to weight loss?”).

There are three different types of diets that are part of intermittent fasting:

In a randomized controlled study recently published in Cell Metabolism, nutrition researchers wanted to answer the following question: does restricting feeding to a 6-hour window (18:6 diet) produce the same effects on body weight and metabolic risk factors as a 4-hour restriction (Warrior Diet or 20:4 diet)? The researchers hypothesized that compared to a diet limited to a 6-hour period, a diet limited to 4 hours would lead to greater weight loss, a greater drop in blood pressure, better blood glucose control, and more pronounced effects on oxidative stress.

There were no restrictions on the amount or type of food consumed and participants were not required to control their calorie intake. During the fasting period, participants were encouraged to drink plenty of water and were allowed to consume calorie-free drinks such as black tea, coffee (without sugar or milk), or diet soda.

After 8 weeks, the two groups that limited their diet to 4-hour and 6-hour periods both lost 3.2% ± 0.4% body weight, while the control group did not significantly lose weight (0.1% ± 0.4%). The 4-hour limited diet therefore did not lead to more weight loss than over a 6-hour period, contrary to the initial hypothesis.

Several parameters, including blood pressure, LDL cholesterol, HDL cholesterol and triglyceride levels were not altered by the time-restricted diet, both for the 4-hour and the 6-hour limitation. These latest results are at odds with previous studies where significant reductions in these parameters were observed. The authors cannot explain these differences, but they suggest that their study may not have had enough participants to be able to observe significant effects on these secondary endpoints of the study.

Summary of key findings from previous studies on intermittent fasting
The effects of alternate-day fasting and the 5:2 diet (2 days of fasting and 5 days of normal eating) on the risk of metabolic disease have been the subject of more than a dozen studies in humans to date. Alternate-day fasting produces 5–7% body weight loss over a short period of time (less than six months). It also provides several metabolic benefits such as reduced blood pressure, LDL cholesterol, triglycerides, fasting insulinemia, insulin resistance, inflammation and oxidative stress. The effects of the 5:2 diet are similar to alternate-day fasting.

Time-restricted feeding has been the subject of fewer studies. There have been six clinical studies in humans to date, and only three of these studies have examined the effects of this diet on body weight loss. According to these few studies, the time-restricted diet produces a loss of body weight of around 2.6 to 3.6% and a reduction in calorie intake of 8 to 20% in 12 to 16 weeks. This type of intermittent fasting has significant effects on metabolic health: marked drop in fasting blood sugar, insulinemia, and insulin resistance. A drop in blood pressure has been observed in several studies, even without loss of body weight. The effects on blood lipid levels are less clear. A few studies of time-restricted feeding report lower triglycerides and LDL cholesterol, but most studies have found no effect on these same lipids.

Conclusion
Although the weight loss seen in this new study is moderate, the authors believe that time-restricted feeding is a promising intervention for those who wish to lose weight. Limiting feeding to a 6-hour period is easier to practice than a 4-hour restriction since someone can, for example, not eat breakfast and have the two meals of the day at relatively normal times (1 p.m. and 6:30 p.m., for example). This study indicates that the 18:6 diet will have as many health benefits as the Warrior Diet (20:4).