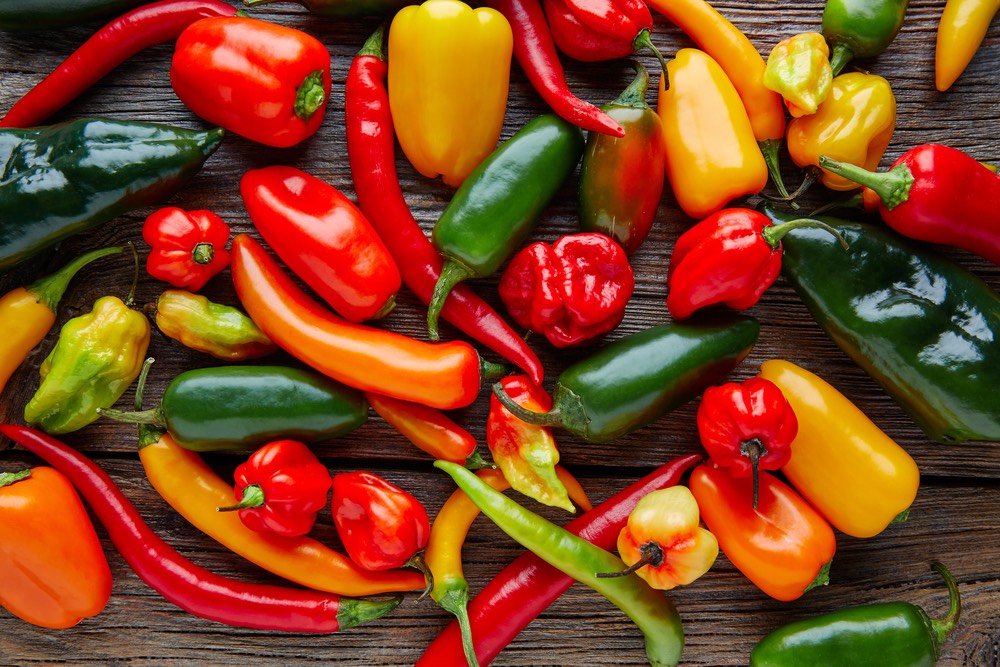 Spicing up the prevention of cardiovascular disease with chili peppers

Chili peppers (Capsicum spp.) are native to South America, where they were already being cultivated for culinary purposes more than 6,000 years ago. Following the discovery of America by Europeans in the 15th century, these hot peppers were disseminated worldwide by Portuguese sailors (particularly in India and Asia), where they were quickly adopted and became essential ingredients in the culinary cultures of these countries.

The gastronomic value of chilies obviously comes from their spicy flavour, which distinctively enhances the taste of different dishes. This property is due to the presence of capsaicin (Figure 1), a phenolic compound that specifically interacts with certain receptors (TRPV1 for Transient Receptor Potential Vanilloid) involved in the pain signal generated by temperatures above 43ºC.

Figure 1. Molecular structure of capsaicin, the molecule responsible for the spicy taste of chili peppers.

By binding to the TRPV1 receptor present in the mouth, capsaicin therefore causes a feeling of heat or a burning sensation, which completely tricks the brain into believing that the mouth is literally “on fire”. The reason many people are attracted to these “painful” substances is still not understood, but could be related to the release of pleasure molecules (endorphins) to mitigate the effects of the “burn” detected by the brain.

In addition to their unique taste properties, a recent study suggests that chili peppers may have positive health effects, particularly for cardiovascular disease. Over an 8-year period, researchers followed just over 20,000 people recruited into the Moli-sani Project, a prospective study of residents of the Molise region of southeastern Italy. By analyzing deaths during this period according to the frequency of chili pepper consumption by participants, the researchers found that the risk of dying prematurely from all causes was reduced by 23% for hot pepper lovers (consumption 4 times per week). This decrease was particularly apparent for mortality linked to coronary heart disease (44%) and cerebrovascular disease (61%) (Figure 2). A downward trend was observed for cancer mortality, but the difference is not statistically significant. 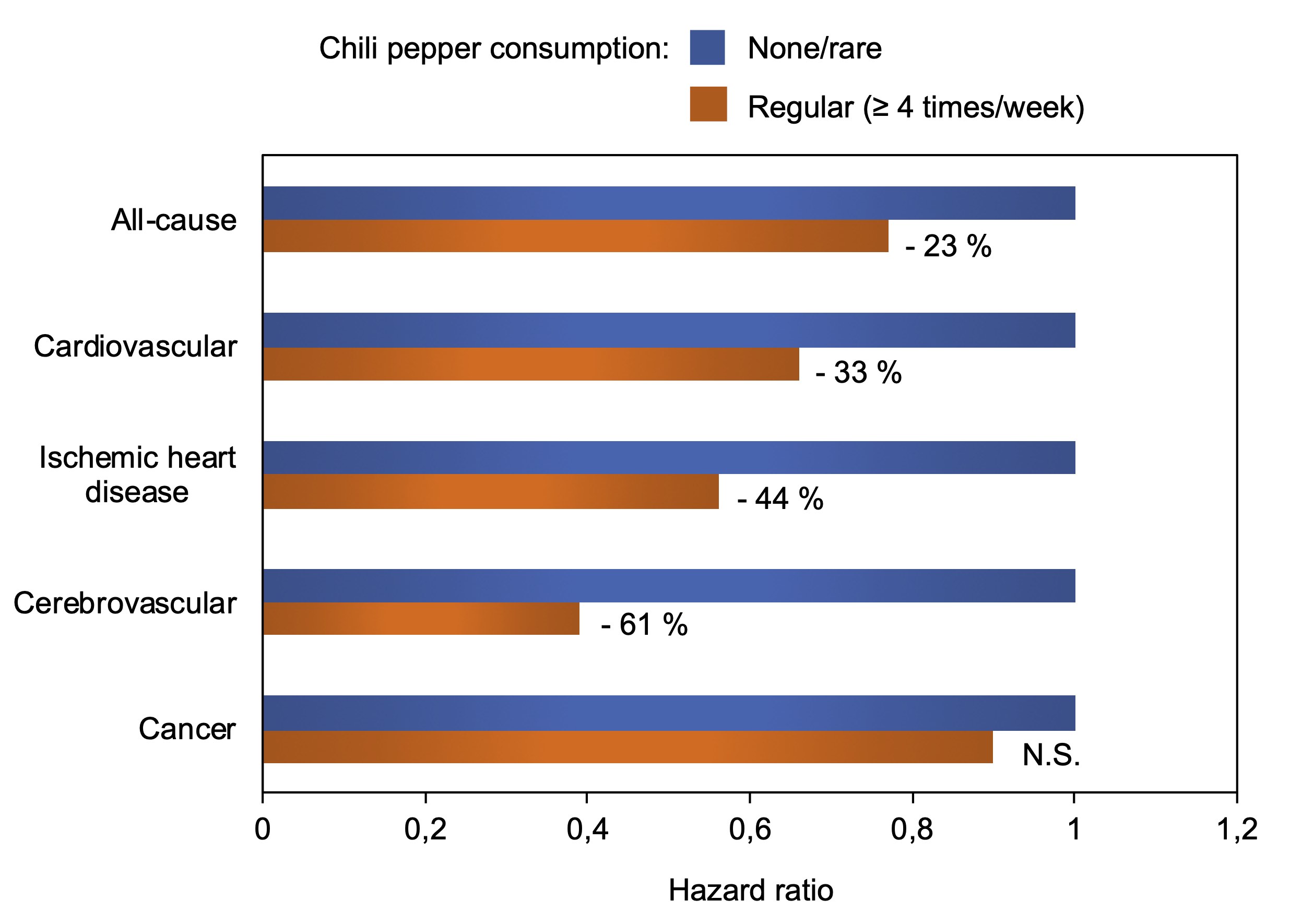 These observations are in agreement with previous studies that have observed a significant reduction (approximately 10–20%) of premature mortality among the largest consumers of spicy foods (here and here, for example).

As the editorial accompanying the article points out, although this type of population study does not directly establish a causal link between chili pepper consumption and mortality, it remains that the experimental data accumulated in recent years make this link biologically plausible. On the one hand, several studies have suggested that capsaicin may help prevent the development of obesity, an important risk factor for diabetes and cardiovascular disease. For example, epidemiological studies have observed that regular consumption of these peppers is associated with a reduction in the prevalence of obesity in certain populations, and clinical studies have observed a loss of abdominal fat following the administration of a supplement of capsinoids (capsaicin and related molecules) compared to placebo. This positive effect of capsaicin on body weight maintenance is mainly linked to a decrease in calorie intake, caused by decreased appetite and increased satiety.

On the other hand, it should be noted that capsaicin also influences other phenomena linked to an increased risk of cardiovascular disease, notably by improving the response to insulin, reducing the oxidation of low-density lipoproteins (LDL), and improving endothelial function. Studies have also suggested that people who season their food with hot peppers eat less salt and are less at risk for hypertension, the main risk factor for cardiovascular events.

Overall, these observations raise the interesting possibility that some minor dietary changes, such as the addition of chili peppers, may have positive impacts on health, particularly at the cardiovascular level. Of course, there should be no illusions: if a person’s diet is based on ultra-processed foods and contains very little fruit and vegetables, it is not by adding sriracha sauce or Tabasco that they will manage to decrease their risk of cardiovascular disease. But in the context of a diet known to be positive for the health of the heart and vessels, such as the Mediterranean diet (adopted by most of the participants of the study mentioned above), it is possible that the positive biological effects of chili peppers on body weight, blood sugar and reduced salt intake may accentuate the benefits associated with this diet and therefore have a positive impact on health. It is well established that regular exercise has many benefits for cardiovascular health, but the underlying mechanisms have not yet been fully identified and understood. A recent study published in Nature Medicine shows that in mice, voluntary exercise reduces the proliferation of hematopoietic stem and progenitor cells (HSPC), which has the effect of reducing the number of inflammatory leukocytes in the bloodstream. Remember that HSPC cells have the ability to transform into different types of cells that are involved in the immune response (leukocytes, lymphocytes, macrophages, etc.).

To test whether regular exercise can modulate hematopoiesis, the researchers put mice in cages in the presence (or not for the control group) of an exercise wheel, where they could exercise at their will. Mice use these exercise wheels readily and with great zeal and are therefore not subjected to stress as when they are forced to exercise such as, for example, forced swimming that has already been used in other studies. After six weeks, mice that exercised voluntarily (doing about 20 times more physical activity than sedentary mice) reduced their body weight and increased their food intake.

Analyses have shown that exercise reduced the proliferation of hematopoietic stem and progenitor cells by 34%. The decrease in HSPC through exercise had the effect of reducing the number of inflammatory leukocytes (white blood cells) in the bloodstream. In addition, the mononuclear cells in the bone marrow of mice that exercised were less able to differentiate into granulocytes, macrophages, and pre-B cells. The researchers showed that the mechanism involves a decrease in the production of leptin (a hormone secreted during digestion to regulate fat stores and control the feeling of satiety) in fat tissues. The decrease in leptin in the bloodstream of mice had the effect of increasing the production of factors of quiescence and retention of hematopoietic stem cells in the bone marrow, and consequently of decreasing the number of leukocytes in the bloodstream (see figure below). 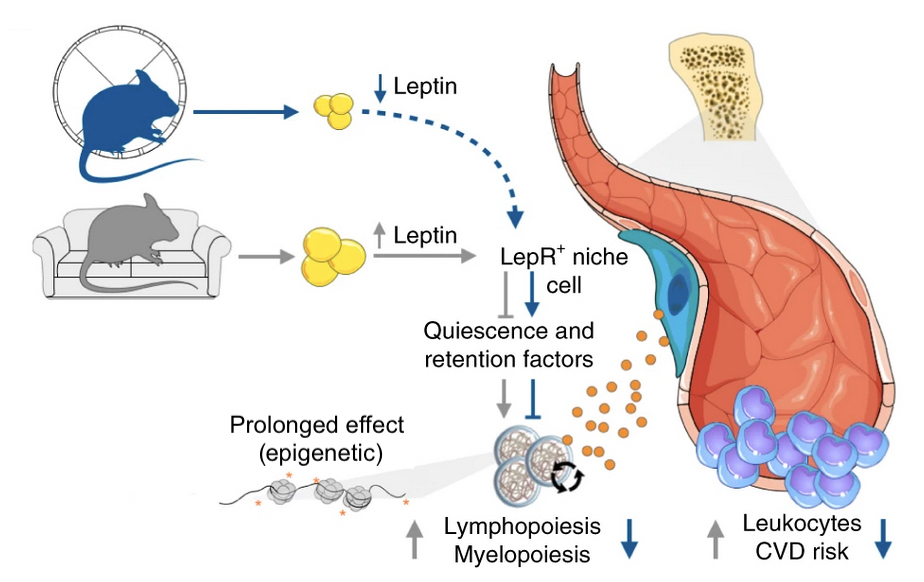 Figure. Schematic summary of the effects of exercise on leukocyte levels and the risk of cardiovascular disease. LepR+: expressing the leptin receptor. Adapted from Frodermann et al., 2019.

Leptin supplementation in mice that exercised (using subcutaneous micropumps) reversed the exercise-induced effects on hematopoiesis, proving that this digestive hormone is involved in this phenomenon.

The exercise wheel was removed from the mouse cage after six weeks. Three weeks later, the effect on leptin production faded, but the effects of exercise on hematopoiesis persisted, i.e. the leukocyte levels of exercise mice were still lower than that of sedentary mice. There is therefore a “memory” of the exercise, which was related to epigenetic changes, i.e. to a difference in the expression of certain genes without alteration of their DNA sequence.

A reduction in leukocyte levels in the blood can lead to an increased risk of infection, as has already been observed for high-intensity exercise. The researchers wanted to see if this was the case with the mice in their study. A component of the cell wall of bacteria (lipopolysaccharide) was injected into the stomachs of mice to induce an inflammatory response. The mice responded quickly by increasing the number of HSPC and defence cells (neutrophils, monocytes, B lymphocytes, T-cells) in the blood and at the site of infection. Mice who exercised reacted more than sedentary mice to lipopolysaccharide injection and had a lower mortality rate when real sepsis was provoked. It is therefore clear that regular voluntary exercise in mice does not decrease the emergency immune response to infection.

The researchers finally wanted to know if exercise could have beneficial effects on hematopoiesis in patients with cardiovascular disease. To do this, they checked whether there was an association between the amount of exercise and the blood levels of leptin or the number of leukocytes in 4,892 participants of the CANTOS study, who were all recruited after having a heart attack. Participants who exercised four or more times a week had significantly lower leptin blood levels. Another study (Athero-Express Study) also showed a favourable relationship between the amount of exercise and levels of leptin and leukocytes. The results of these two clinical studies, combined with those obtained in mice, indicate that physical activity has beneficial effects on leptin levels and leukocytosis in patients with cardiovascular disease.

This new study suggests that a sedentary lifestyle contributes to cardiovascular risk through an increased production of inflammatory leukocytes, and confirms the idea that physical activity reduces chronic inflammation. Let us recall the main recommendations of the World Health Organization’s (WHO) regarding physical activity for health:

“In order to improve cardiorespiratory and muscular fitness, bone health, reduce the risk of noncommunicable diseases and depression,

To learn more about the benefits, quantity and types of exercise, check out these articles: