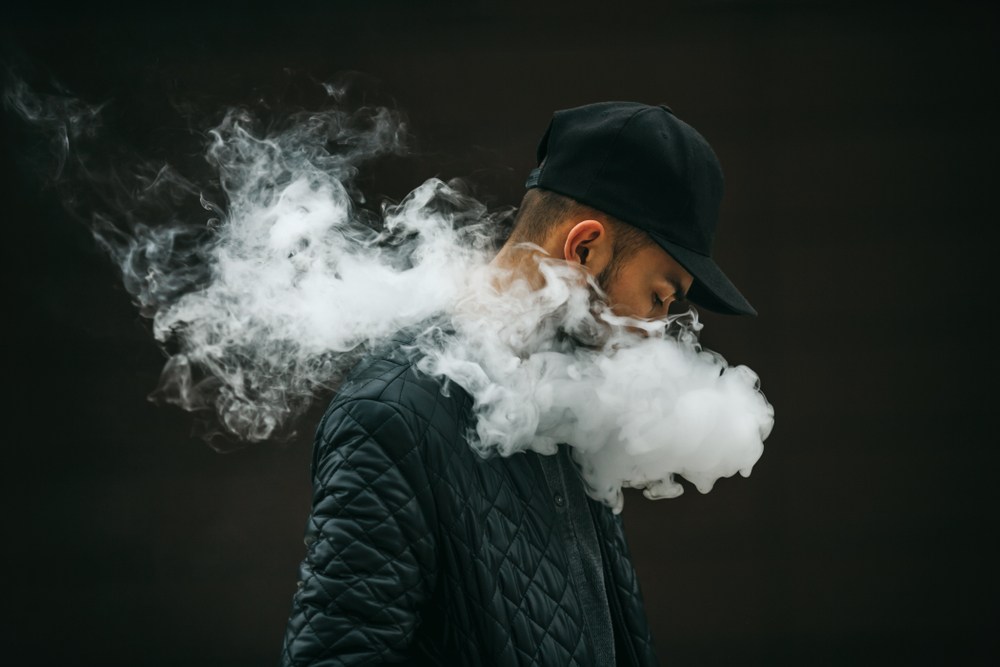 In recent years, there has been much mention of the marked increase in the use of e-cigarettes by young people, a trend that has recently increased with the arrival of Juul (see our article on this topic). The often alarmist tone that accompanies the reports of these studies suggests that vaping currently reaches “epidemic” proportions and poses a serious threat to the health of young people by pushing them towards the traditional cigarette.

These fears are no doubt in good faith, but they are not at all consistent with the results of the serious surveys that have been conducted in recent years, particularly with regard to smoking rates among young people.

Smoking rates continue to plummet among young people.
Very little is said about it, but one of the most encouraging trends in tobacco control is the marked decline in youth smoking seen in recent years. One of the best examples of this reduction is provided by the “Monitoring the future” survey, a large epidemiological study conducted since 1975 by researchers at the University of Michigan, which annually measures the prevalence of users of different drugs among American high school students. As shown in Figure 1, while youth smoking peaked in 1997 with 37% of 12th grade youth who smoked occasionally and 25% who smoked daily, these proportions have since significantly fallen to 7.6% and 2%, respectively, in 2018. A similar trend is observed in Canada, with approximately 3.5% of 12–17-year-olds who were smokers (casual or regular) in 2017, a 25% decrease compared to 2013 (4.6%). It should also be noted that according to the latest data from Statistics Canada, the proportion of Canadians aged 12–17 who smoked cigarettes daily was only 0.9% in 2018. 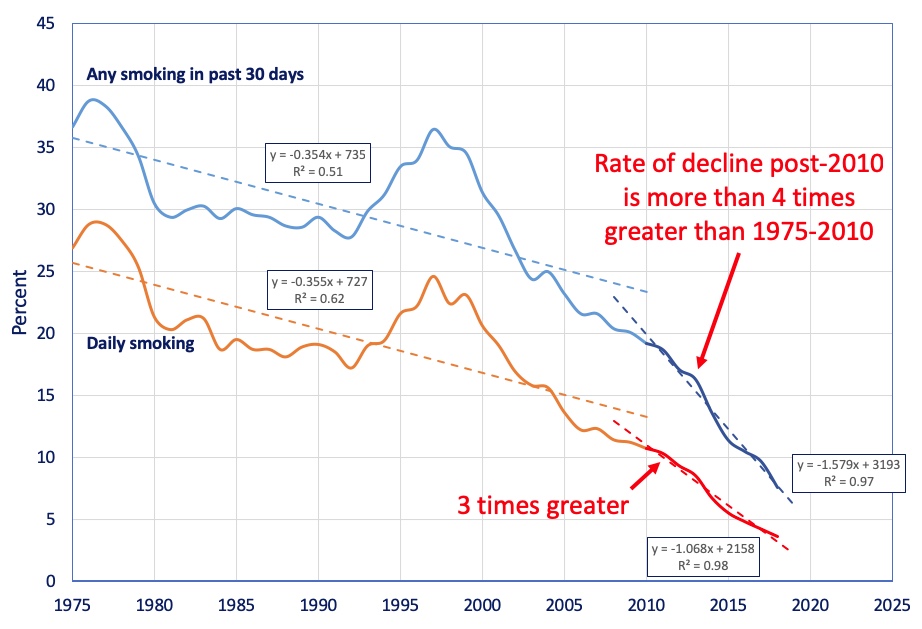 Figure 1. Changes in the proportion of smokers among 12thgrade American high school students from 1975 to present day. From Bates (2019).

Can the introduction of e-cigarettes reverse these trends, as many fear? There has been a lot of evidence from studies (here, here and here, for example) that teens who have tried e-cigarettes are more likely to smoke a tobacco cigarette than those who have never been in contact with the electronic cigarette. But as several experts have pointed out, this interpretation is not scientifically valid, because it is impossible to establish a causal link between the two phenomena: a young person attracted by tobacco will experiment with several forms available, without necessarily meaning that trying one will lead to testing another.

To determine the impact of the e-cigarette, the best measure remains to examine the evolution of youth smoking. And in this regard, the results are reassuring: although these products have appeared relatively recently (around 2010), the available data suggest that they have not had negative impacts on the adoption of cigarettes by young people: in the United States, for example, the smoking cessation rate is 3 to 4 times higher between 2010 and today than between the period from 1975 to 2010, suggesting that e-cigarettes have instead accelerated the reduction of youth smoking (Figure 1). It should also be noted that Juul has been available since 2015 in the United States and has since conquered most of the e-cigarette market, but this has not resulted in a resurgence of youth smoking. The data are also reassuring for England, where e-cigarettes have been available for several years: the smoking rate has been steadily decreasing since 2011 and the largest decrease is observed among 18–24-year-olds.

According to the data currently available, the fear that vaping leads to smoking therefore seems totally unfounded. On the contrary, it seems that vaping represents an increasingly popular alternative to traditional cigarettes and could even replace conventional tobacco products in the short and medium term. This is very encouraging, since it is clearly established that e-cigarette vapour is much less harmful than cigarette smoke, particularly because of a very significant decrease in the presence of carcinogenic compounds.

Regular vapers are usually smokers.
A recent study found that the proportion of young e-cigarette users has increased significantly in Canada from 29% to 37%. At first glance, this may actually seem enormous, and it is this type of statistic that is at the root of the concerns raised by vaping critics.

However, it is important to know that in this type of study, individuals are considered smokers or vapers if they have used these products at least once in a given period (in the last month, for example) or during their lifetime. This approach fails to distinguish occasional users from those who regularly smoke or vape. To make a simple analogy, it is as if a study of pathological gambling considered that people who buy a lottery ticket from time to time belong to the same category as those who go to the casino every day. This is obviously not the case: it is the development of a dependence on a substance (tobacco, alcohol, drugs, opiates) or an activity (excessive gambling, for example) that poses risks, whereas occasional use is much more like an experiment, a phenomenon that is particularly common among young people.

In fact, when we take into account the frequency of vaping and smoking habits, the situation is much less worrying. As shown in Figure 2, the vast majority of young people only vape occasionally (only 3.6% of 16-19-year-olds were vaping more than 15 days per month according to the latest estimates); 2) it is mainly young people who smoke cigarettes (regularly or occasionally) who are attracted to these products; and 3) only a tiny proportion of non-smokers (less than 1%) vape regularly. 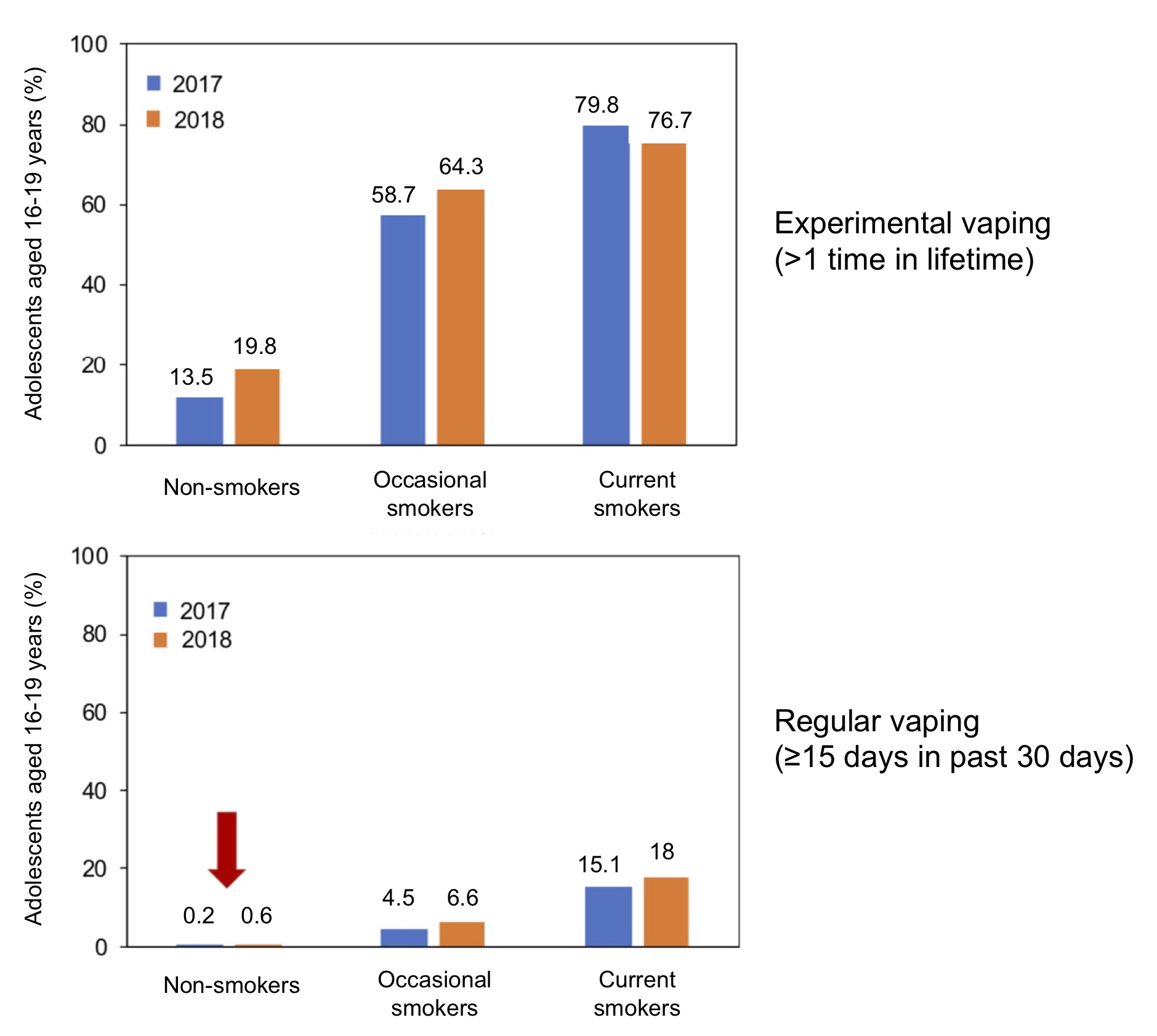 Figure 2. Distribution of vapers according to the frequency and habits of tobacco use. Note the very low percentage of non-smoking youth who regularly vape (arrow). From Hammond et al. (2019).

The situation is not “out of control”, as we hear regularly, but rather reflects a new reality: the traditional cigarette is no longer popular with young people, possibly because of the exorbitant prices and smoking bans in almost all public places. The vast majority of those who want to experiment with the effect of tobacco are turning to new forms of nicotine such as e-cigarettes, but even then, regular users of these products remain relatively few, and are for the most part young people who are primarily attracted to tobacco or inclined to adopt higher-risk behaviours in general. This last point is well illustrated by a study in Colorado, where researchers have found that vapers are 5 to 10 times more likely to have previously tried hard drugs such as cocaine or regularly drink excessive amounts of alcohol than non-vapers (Table 1).

Table 1. Comparison of the prevalence of risky behaviours between vapers and non-vapers. From Ghosh et al. (2019). 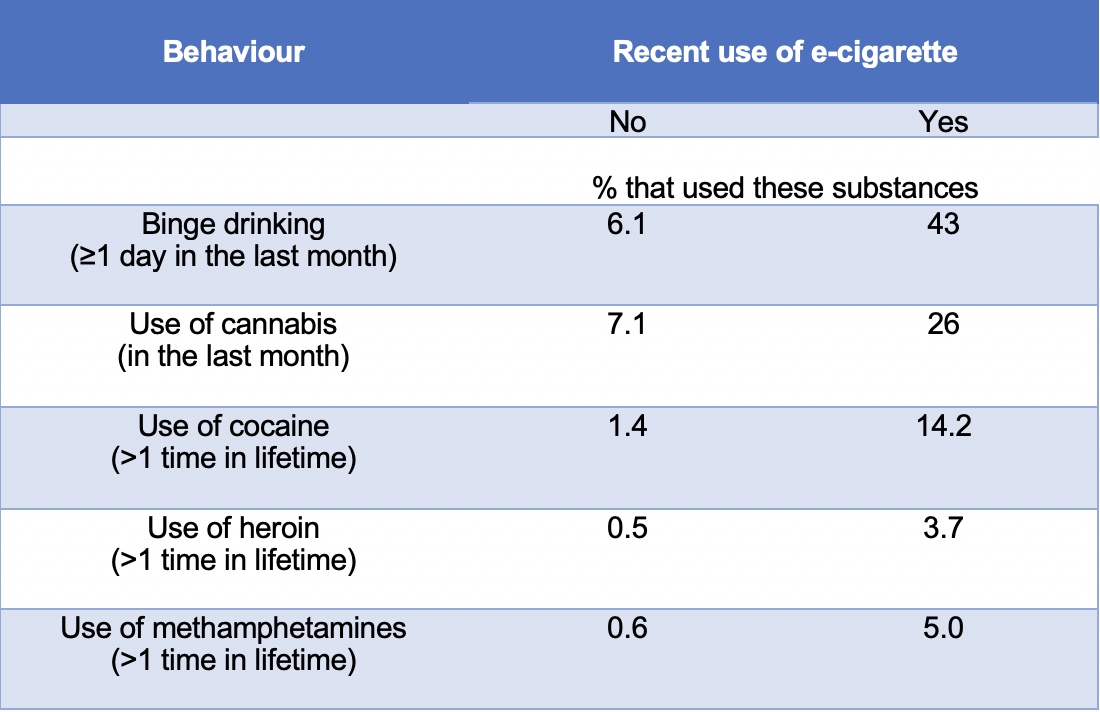 Overall, and despite the sensationalist headlines in recent years, we must consider that e-cigarettes do not pose a threat to the enormous progress we have made in tobacco control. On the contrary, regular vapers are mostly smokers, and the adoption of these products can substantially reduce the risks associated with cigarette smoke. Based on the very low percentages of non-smokers who regularly vape, it also seems that nicotine vapour is less addictive than traditional cigarettes and it is very unlikely that it can be used as a gateway to tobacco.

It should also be remembered that the main utility of e-cigarettes remains one of the best ways to quit smoking, with twice the effectiveness of nicotine replacement therapy. The British have long recognized the usefulness of e-cigarettes in tobacco control and, hard to imagine here, have even made these products the emblem of anti-smoking campaigns (see photo). 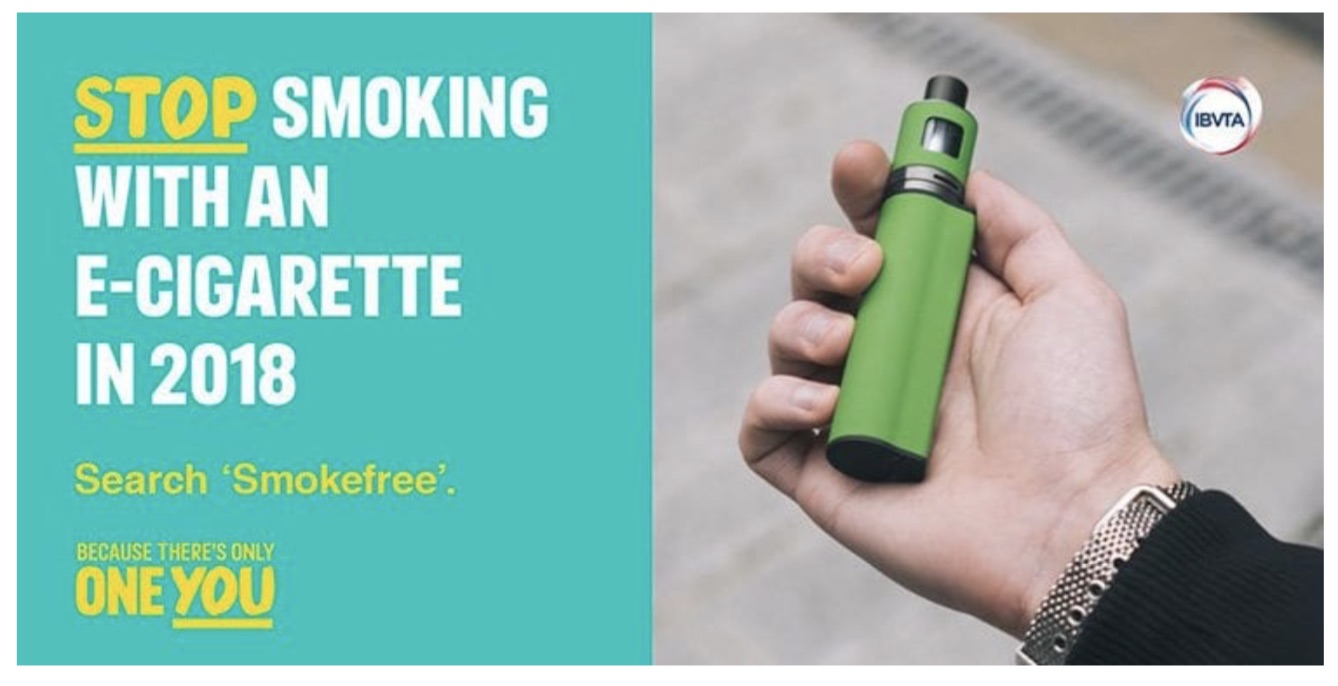 An extremely damaging collateral effect of the current “hysteria” towards e-cigarettes is to make smokers suspicious of these products and at the same time to deprive them of a valuable aid to quit smoking. The latest surveys also show a sharp increase in the number of smokers who think that the e-cigarette is as, if not more, damaging than the traditional cigarette. This is a very unfortunate situation, which shows how the best is sometimes the enemy of the good: by wanting at all costs to prevent vaping among young people, we are creating a climate which discourages the use of alternatives to tobacco that are infinitely less dangerous and would have a very positive impact on the health of smokers.

Of course, we must remain vigilant about the use of these products by young people and I will be the first to question the regulatory framework surrounding their marketing if it turns out that modern e-cigarettes (Juul, for example) lead to an upsurge in smoking among this population. With the current state of knowledge, on the other hand, there are many reasons to be optimistic and consider the electronic cigarette as a very promising tool to reduce smoking and even, hopefully, ultimately lead to the complete disappearance of the traditional cigarette.