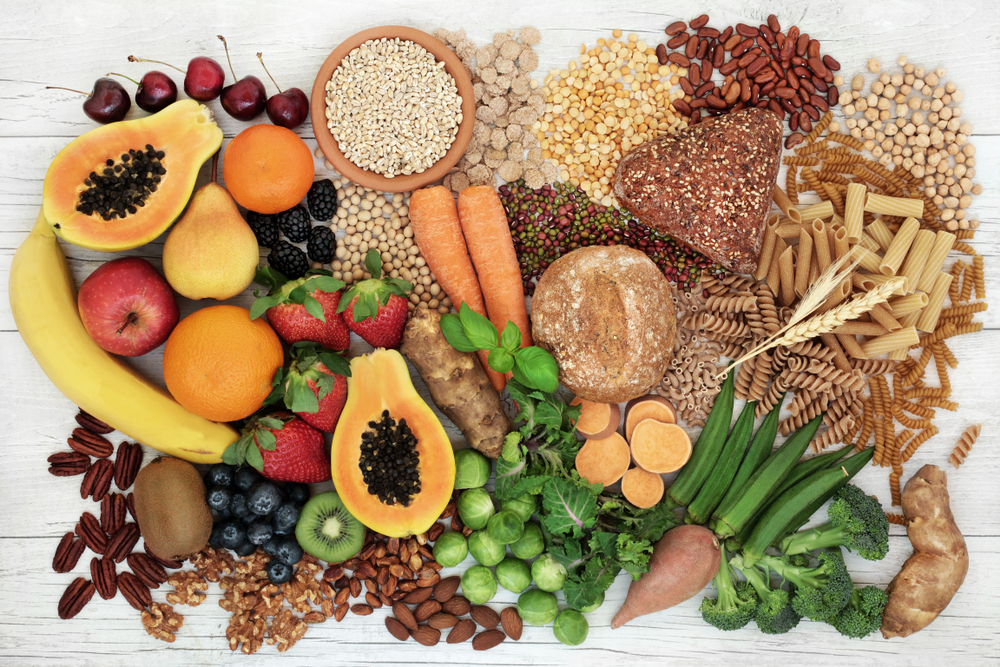 Dietary fibre is made up of complex sugars that cannot be digested by human digestive enzymes, but is an important source of energy for gut bacteria, which have the ability to break it down. This fibre comes mainly from plants, but is also found in animal tissues (meat, offal), fungi (mushrooms, yeasts, moulds), and foodborne microorganisms. The main fibres are cellulose, lignins, pectin, inulin, starches and dextrins resistant to amylases, chitins, beta-glucans and other oligosaccharides. However, not all dietary fibre can be used by the intestinal microbiota (cellulose for example), so researchers are more particularly interested in “microbiota-accessible carbohydrates” or MAC, which are found in legumes, wheat and oats, for example.

Resurgence of allergies and inflammatory and autoimmune diseases
Non-communicable diseases, such as allergies and inflammatory and autoimmune diseases have been on the rise in Western countries over the past century. Although we do not know all the causes of these increases, it is quite plausible that they have an environmental component. The transition from the traditional diet to the Western diet that occurred after the Industrial Revolution is often called into question. The typical Western diet consists primarily of processed foods high in sugar and fat, but low in minerals, vitamins, and fibre. The recommended daily intake of dietary fibre is at least 30 grams (1 ounce), while followers of the Western diet consume only 15 grams on average. In addition, people living in traditional societies consume up to 50–120 g/day of fibre and have a much more diverse gut microbiota than Westerners. A diverse microbiota is associated with good health in general, while a poorly diversified microbiota has been associated with chronic diseases common in Western countries, such as type 2 diabetes, obesity, inflammatory bowel disease (ulcerative colitis, Crohn’s disease), colorectal cancer, rheumatoid arthritis and asthma.

Metabolites of the gut microbiota
The gut microbiota contributes to human physiology by producing a multitude of metabolites. The most studied are short-chain fatty acids (SCFAs), which are organic compounds such as acetate, propionate and butyrate that together constitute ≥95% of SCFAs. These metabolites are absorbed and find their way into the bloodstream via the portal vein and act on the liver and then, via the peripheral blood circulation, on other organs of the human body. SCFAs play key roles in the regulation of human metabolism, the immune system, and cell proliferation. SCFAs are metabolites produced by microorganisms in the intestinal microbiota from dietary fibres, which are complex sugars. The microbiota produces other metabolites from amino acids derived from dietary protein, including indole and its derivatives, tryptamine, serotonin, histamine, dopamine, p-cresol, phenylacetylglutamine, and phenylacetylglycine.

A lack of dietary fibre leads to the generation of toxic metabolites by the microbiota
Insufficient fibre intake not only leads to reduced microbiota diversity and a reduction in the amount of SCFAs produced, but also causes a shift in the metabolism of microorganisms towards the use of substrates less favourable for human health. Among these alternative substrates, amino acids from food proteins are fermented by the microbiota into branched-chain fatty acids, ammonia, amines, N-nitroso compounds, phenolic compounds such as p-cresol, sulphides, and indole compounds. These metabolites are either cytotoxic and/or pro-inflammatory and they contribute to the development of chronic diseases, particularly colorectal cancer.

Effects on mucus production that protects the intestinal lining
The main substrates used by the microbiota when fibre intake is low are mucins, glycoproteins contained in the mucus that cover and protect the epithelium of the intestinal lining. Maintaining this layer of mucus is very important to prevent infections; however, a diet low in fibre alters the composition of the gut microbiota and leads to a significant deterioration of the mucus layer, which can increase the susceptibility to infections and chronic inflammatory diseases (see figure, below). Transcriptomic analyses have revealed that when there is a lack of MAC-type fibres, the enzymes that break down the mucus are expressed in greater quantities in the microorganisms of the microbiota. The consequences of the deterioration and thinning of the mucus layer are a dysfunction of the intestinal barrier, i.e. increased permeability, which increases susceptibility to infection by pathogenic bacteria. A diet rich in fibre has the opposite effect: the microbiota is diverse and the abundant production of SCFA metabolites stimulates the production and secretion of mucus by specialized epithelial cells, known as goblet cells. 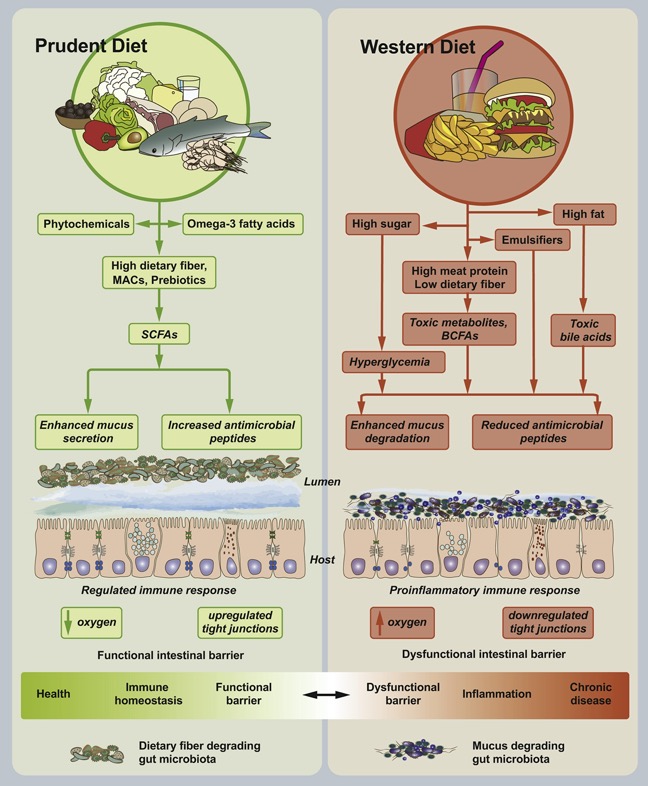 Figure. Effect of a high- or low-fibre diet on the composition and diversity of the gut microbiota and the impact on human physiology. MAC: microbiota-accessible carbohydrates. From Makki et al., 2018.

Immune system
A healthy gut microbiota contributes to the maturation and development of the immune system (see this review article). For example, short-chain fatty acids (SCFAs) produced by the microbiota stimulate the production of regulatory T-cells. SCFAs have many effects on the function and hematopoiesis of dendritic cells as well as on neutrophils, which are the first leukocytes to be mobilized by the immune system in the presence of a pathogen.

Inflammation and colon cancer
The incidence of inflammatory bowel disease has increased dramatically in the West over the past few decades. A diet low in fibre has been correlated with an increased incidence of Crohn’s disease. On the contrary, a sufficient intake of dietary fibre seems to protect against the development of ulcerative colitis, an effect which has been associated with a decrease in SCFAs produced by the microbiota, butyrate in particular, which has anti-inflammatory properties. Inflammatory bowel disease can lead to the development of colon cancer. Additionally, reduced dietary fibre intake has been linked to an increased incidence of colorectal cancer.

Dietary fibre plays a much more complex role than was believed a short time ago, when it was thought that it had a purely mechanical role in intestinal transit, by an increase in the volume of the alimentary bolus and by its emollient properties. Adequate dietary fibre intake helps maintain a diverse and healthy gut microbiota, which can prevent the development of allergies as well as inflammatory and autoimmune diseases. The gut microbiota is the subject of intense research efforts, as evidenced by the numerous scientific articles published each month, and it certainly has not revealed all of its secrets!