Insulin resistance: A dangerous consequence of being overweight The recent death of eminent American researcher Gerald Reaven, nicknamed the “father of insulin resistance,” is a good opportunity to recall the leading role this metabolic disorder plays in the development of type 2 diabetes and cardiovascular disease.

What is insulin resistance?
After a meal, insulin is secreted by the pancreas to signal to the body that circulating sugar levels need to be lowered, either by capturing it in the muscles and adipose tissue, or by promoting its storage in the liver. Under normal conditions, this mechanism is highly accurate and helps to keep the blood sugar level at an adequate level.

In people who are overweight, and especially those whose excess fat is located at the abdominal level, this insulin action is often disrupted and organs are no longer able to capture and store sugar effectively; they are said to be “insulin-resistant”. In its early stages, this insulin resistance often goes unnoticed because the pancreas is able to produce larger amounts of the hormone to compensate for this loss of effectiveness and thus allows organs to continue to collect and store enough sugar (see left portion of the figure). This compensatory hyperinsulinemia makes it possible to maintain blood glucose at approximately normal levels, but it unfortunately causes several metabolic abnormalities that can lead to the development of certain serious diseases. For example, excess insulin stimulates the production of triglycerides by the liver, which promotes the accumulation of fat and can result in the development of hepatic steatosis (fatty liver). Increased secretion of these fats into the bloodstream causes dyslipidemia, characterized by high triglycerides, an increase in LDL cholesterol, and a decrease in HDL cholesterol. Meanwhile, hyperinsulinemia increases sodium retention in the kidneys, contributing to the increased incidence of hypertension seen in insulin-resistant individuals. 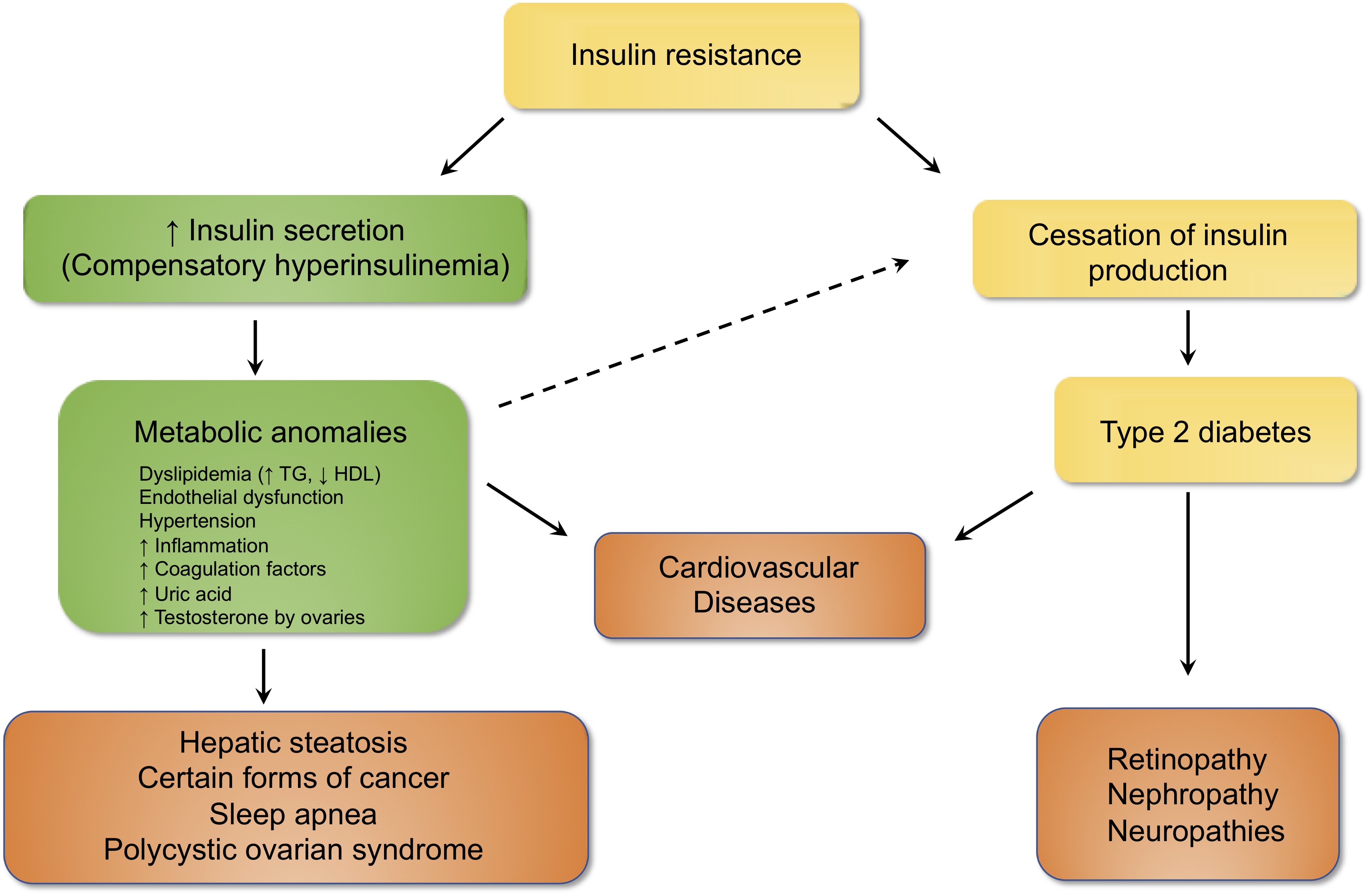 All of these factors (dyslipidemia, hepatic steatosis, hypertension), combined with increased inflammation and a change in the properties of the endothelial cells lining the blood vessels (inflammation, procoagulant properties), make insulin resistance an important risk factor for cardiovascular disease.

Type 2 diabetes
In the longer term, overproduction of insulin can lead to pancreas depletion, which ultimately leads to the cessation of hormone production and the onset of type 2 diabetes, i.e., a state of chronic hyperglycaemia (see the right portion of the figure). This excess of blood sugar is very harmful to the blood vessels and significantly increases the risk of cardiovascular disease (heart attack and stroke) as well as damage to tissues whose function depends on the small blood vessels such as the retina, kidneys or nerves. Insulin resistance can be considered as a prediabetic state, the harbinger of diabetes developing insidiously.

“Excess abdominal fat should be considered as the first clinical sign of insulin resistance.”

Stay alert
One problem with insulin resistance is that it is often difficult to diagnose at an early stage, not only because it does not cause clinical symptoms but also because blood glucose is normal. As mentioned earlier, in the early stages of resistance, the pancreas offsets the loss of insulin efficiency by secreting larger amounts of the hormone, which is sufficient to maintain blood sugar at normal levels. Patients (just like their doctors) then have the false impression that they are in perfect health, even if in fact they are prediabetic and will become diabetic in the coming years if nothing is done. Overall, the studies suggest that a slight elevation of glycated haemoglobin (Hb1Ac 5.5% and above), a marker of chronic hyperglycaemia, may be a better approach for early detection of insulin resistance than tests that are used to measure blood glucose (fasting glucose, glucose tolerance). For example, it has recently been shown that people with normal fasting glucose but a HbA1c greater than 5.9% were eight times more likely to develop diabetes in the next four years than those whose HbA1c was less than 5.7%.

In short, it is important to remain vigilant and realize that excess fat, although somehow becoming the norm in our society (more than 60% of Canadians are overweight), is far from  harmless. In practice, excess abdominal fat (waist circumference greater than 102 cm for men and 88 cm for women) should be considered as the first clinical sign of insulin resistance and an increased risk of developing type 2 diabetes, with disastrous consequences for cardiovascular health.

Fortunately, insulin resistance is not an irreversible phenomenon: several studies show that people with glucose metabolism disorders can reverse the situation by simply changing their lifestyle. For example, a recent study reports that the adoption of a diet consisting primarily of low-fat plant foods is associated with a significant improvement in insulin sensitivity in overweight individuals. Being more active also seems beneficial: a study of 44,828 Chinese adults (20–80 years old) with above-average fasting blood glucose showed that people who were the most physically active were 25% less likely to develop type 2 diabetes.