Electronic cigarettes cause much less inflammation than tobacco 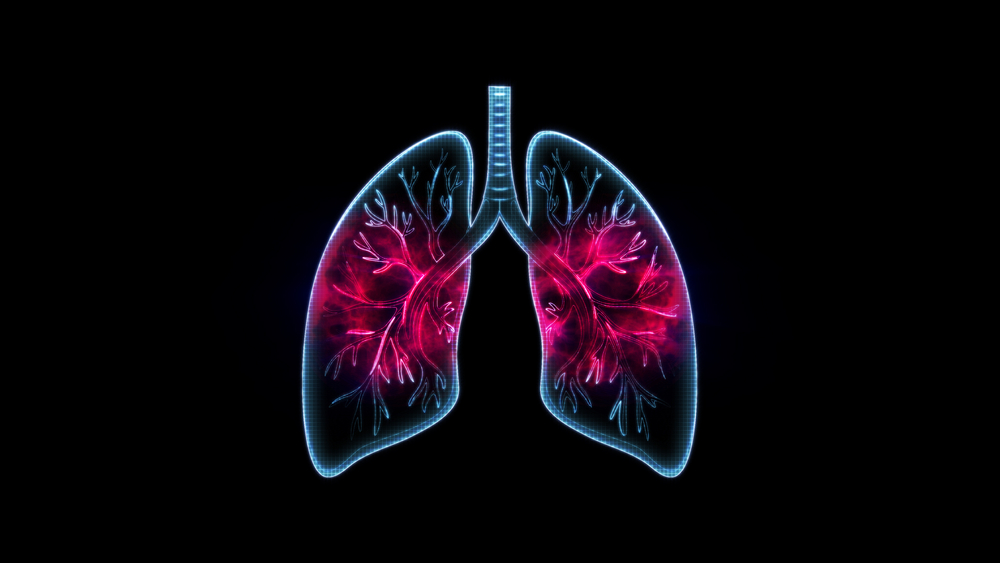 It is now well established that smokers have a reduced life expectancy of around 10 years compared to non-smokers. This dramatic increase in the risk of premature mortality is due to the repeated exposure of smokers to the thousands of toxic and carcinogenic substances that are generated during the combustion of tobacco leaves (polycyclic aromatic hydrocarbons and nitrosamines, among others). For example, it is estimated that each pack of cigarettes contains enough carcinogenic compounds to cause two mutations in the DNA of lung cells, so decades of smoking results in the accumulation of several thousand of these mutations and dramatically increases (about 40 times) the risk of lung cancer.

Pro-inflammatory smoke
Another factor that contributes to the harmfulness of tobacco is the chronic inflammation caused by the many toxic compounds found in cigarette smoke. Locally, this inflammation damages cells in the airways and greatly increases the risk of developing chronic obstructive pulmonary disease (e.g. emphysema). But the damage caused by this inflammation is not limited to the lungs. Following inhalation of cigarette smoke, the toxic compounds rapidly diffuse into the pulmonary capillaries and can then spread throughout the body via the bloodstream. A climate of generalized chronic inflammation is then created, characterized by an increase in several inflammatory markers (IL-6, CRP, ICAM) and the recruitment of immune cells to the surface of blood vessels, two phenomena that contribute to the development of atherosclerosis.

The blood vessels that supply the heart (coronary arteries) are particularly vulnerable to this inflammation. Since the heart is closely associated with the lungs, it is the first organ to receive blood that has been in contact with cigarette smoke and is therefore necessarily exposed to higher concentrations of toxic compounds.

The consequences of this proximity are disastrous. Studies show that people who smoke a pack a day have a 5 times higher risk of myocardial infarction compared to those who have never smoked, and smoking is estimated to be responsible for about 20% of all coronary heart disease deaths. So, even though we mainly talk about the major impact of tobacco on the risk of suffering from lung cancer, we must not forget that cardiovascular diseases remain the main cause of death associated with smoking. Of all the actions a person can take to improve their cardiovascular health (and overall health), quitting smoking is by far the most important.

Reversible damage
The good news is that this damage of smoking on cardiovascular health can be reversed by quitting. Studies show that former smokers see their risk of cardiovascular accident decrease by 40% in the first five years after quitting and becomes similar to that of non-smokers after 10–15 years. Smoking cessation is beneficial at any age, but is particularly effective before the age of 40, with a 90% reduction in the risk of premature death from smoking.

Quitting smoking is difficult, with only 5% of people able to remain smoke-free after one year. However, several recent data show that this smoking cessation success rate can be considerably increased among smokers who opt for e-cigarettes. For example, a randomized clinical trial recently showed that e-cigarettes can double the effectiveness of smoking cessation compared to traditional approaches based on nicotine replacement therapy. A Cochrane review of 50 studies (including 26 randomized trials) with a total of 12,430 participants comes to a similar conclusion.

Reducing damage
In addition to facilitating smoking cessation in the longer term, adopting e-cigarettes also has the advantage of immediately reducing the damage caused by tobacco. Remember that in an e-cigarette, a nicotine solution is heated to 80°C (compared to temperatures around 900°C in a cigarette), and therefore the vapour generated does not contain carbon monoxide, nor the thousands of toxic combustion products found in cigarette smoke. According to a recent study by the Institut Pasteur, the vapour emanating from e-cigarettes contains less than 1% of the toxins present in cigarette smoke, and consequently substantially reduce smokers’ exposure to these toxic compounds (see our article on this subject).

Two recent studies show that this drastic decrease in the amount of toxic compounds in e-cigarette vapour correlates with a significant decrease in inflammation normally observed in response to cigarette smoke. In the first of these studies, the researchers compared the levels of different inflammatory markers (hsCRP, IL-6, sICAM) or oxidative stress (urinary 8-isoprostane) present in non-smokers, vapers, cigarette smokers, and mixed users (vapers and smokers). As shown in Figure 1, while smoking causes a significant increase in the levels of all markers examined, these increases are much smaller, and in some cases (IL-6) even completely abolished, among exclusive e-cigarette users. Replacing tobacco cigarettes with an e-cigarette can therefore substantially decrease the inflammatory response and, in turn, reduce the risk of cardiovascular disease. However, the study clearly shows that this reduction in inflammation is not at all observed in vapers who continue to smoke cigarettes at the same time. To truly reduce the damage caused by smoking, e-cigarettes must therefore completely replace cigarettes and not simply serve to reduce the number of cigarettes smoked in a day. 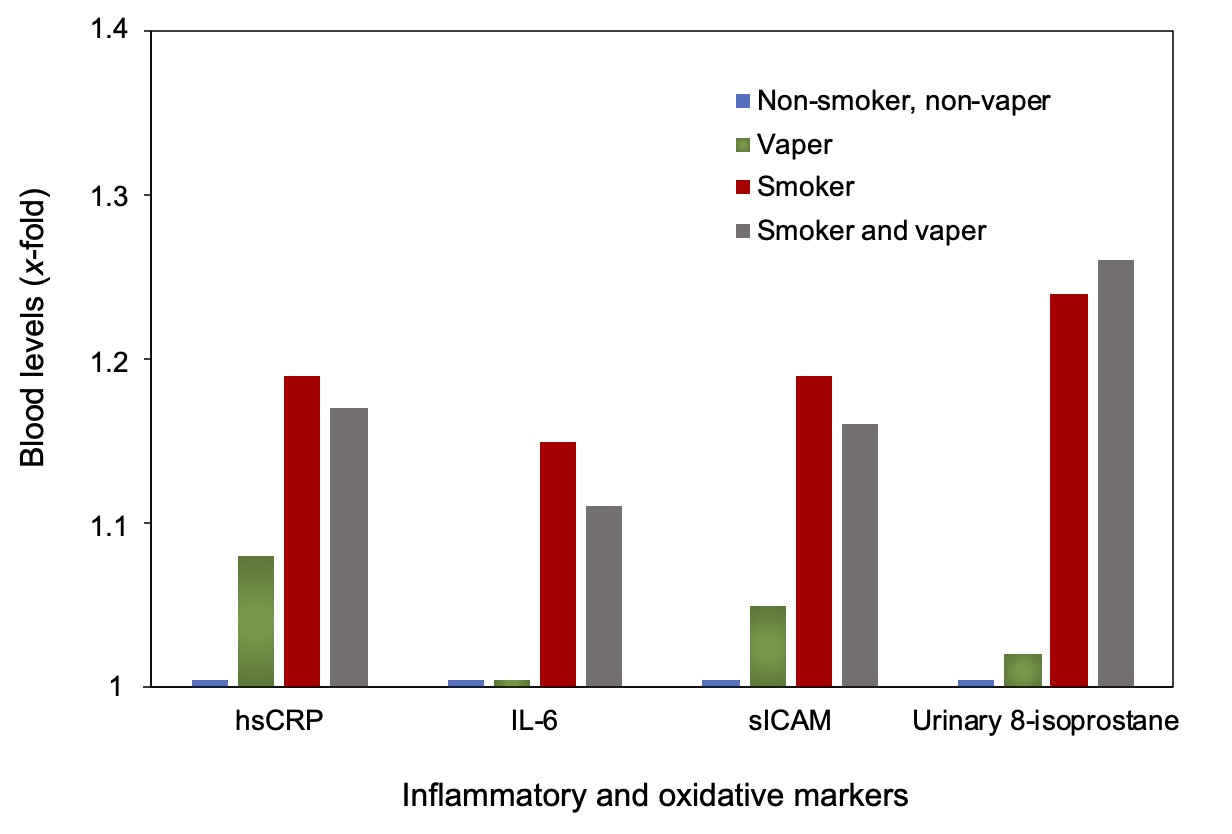 The other study looked at the impact of e-cigarettes on the expression of inflammatory proteins by monocytes, a class of white blood cells involved in the innate immune response. Over-activation of these cells (by toxic compounds like cigarette smoke, for example) has been shown to trigger an inflammatory response that plays an important role in the initiation and progression of atherosclerosis.

Using blood samples taken from non-smokers, smokers, and vapers, the researchers examined by flow cytometry the profiles of inflammatory proteins (caspase-1, IL-6 receptor, TLR4) present in circulating monocytes in each category of volunteers. Unsurprisingly, they noted that the expression of all of these inflammatory proteins was higher in smokers, about 4 times higher on average than in non-smokers. However, this inflammatory signature was completely absent in vapers, suggesting once again that the elimination of cigarettes in favour of e-cigarettes leads to concrete health benefits for smokers. This is consistent with a recent randomized controlled trial that showed that the transition of smokers to e-cigarettes is accompanied by a rapid improvement (in just 1 month) in the health of the blood vessels.

This study shows once again how e-cigarettes allow smokers to significantly reduce their exposure to the many toxic substances in cigarette smoke and are therefore an extremely useful tool in the fight against diseases caused by smoking.