The benefits of extra virgin olive oil on cardiovascular health 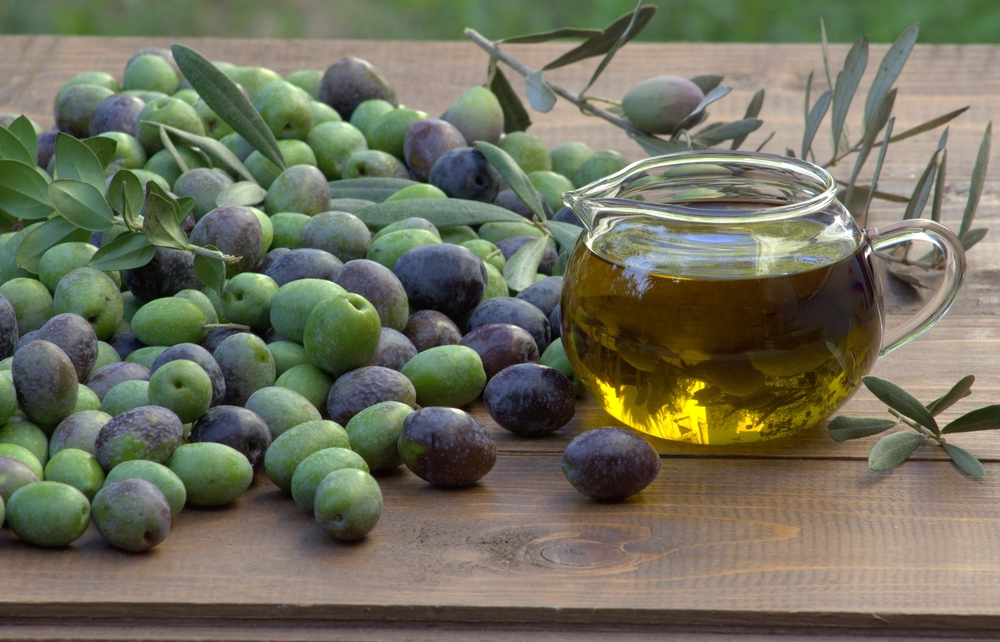 The traditional Mediterranean diet has several positive effects on cardiovascular health by improving the lipid profile (cholesterol, triglycerides) and by reducing chronic inflammation, blood pressure, blood sugar and the risk of diabetes. Several studies have clearly established that these effects result in a significant reduction in the risk of cardiovascular disease.

The Mediterranean diet is characterized by the abundant consumption of plant-based foods (fruits, vegetables, whole-grain cereals, legumes, nuts, herbs), a moderate intake of fermented dairy products (yogurt, cheese), fish, seafood and red wine as well as a low consumption of red meat and added sugars. It is therefore an exemplary diet, in which complex plant sugars are the main sources of carbohydrates and where the proteins come mainly from fish and legumes instead of red meat.

Another important feature of the Mediterranean diet is the daily use of large amounts (60–80 mL) of olive oil as the main source of fat for cooking. Several studies have reported that countries that are heavy consumers of olive oil have a much lower incidence of cardiovascular disease than those that consume mainly animal fats, suggesting a positive role of olive oil in this protective effect. Traditionally, these beneficial properties of olive oil have been attributed to its very high content (around 80%) of oleic acid, a monounsaturated fatty acid that contributes to its antioxidant properties. However, and unlike most vegetable oils, olive oil also contains a host of minor compounds (1–3% of the oil) that also play very important roles in its positive effects on cardiovascular health (see below). This is particularly the case for several phenolic compounds found exclusively in olive oil, including phenolic alcohols such as hydroxytyrosol and tyrosol and polyphenols of the secoiridoid family such as oleuropein, ligstroside, oleacein and oleocanthal (Figure 1). 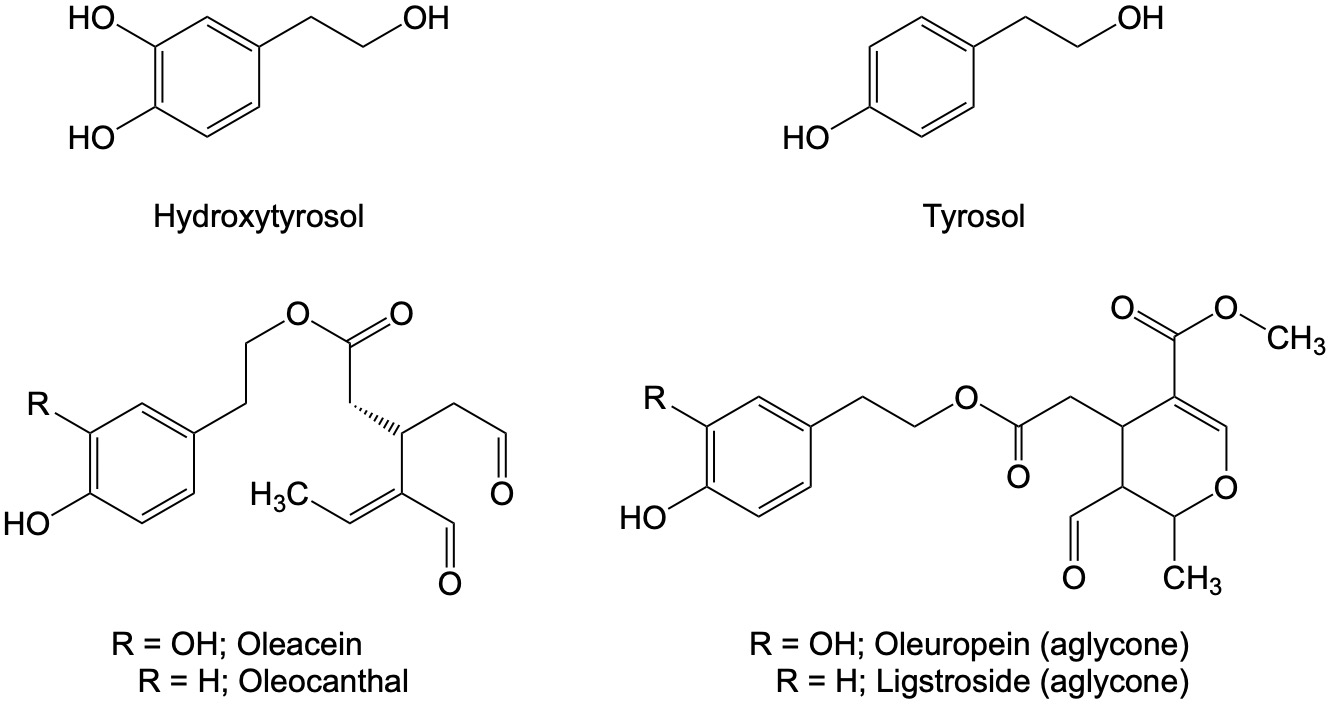 One fruit, several types of oils
Most vegetable oils come from seeds that have been extracted with an organic solvent (e.g. hexane) and subsequently heated to a high temperature to evaporate this solvent and remove impurities that give them an undesirable smell and flavour. These drastic procedures are not necessary for olive oil as the olives are simply pressed and the oil in the pulp is extracted by mechanical pressure, without using chemical processes or excessive heat.

Olive oils are classified according to the quality of the oil that is obtained by the pressing procedure (Figure 2). Good quality oils, i.e. those with low acidity (<2% free oleic acid) and that meet certain taste, bitterness and spiciness criteria are called “virgin” olive oils or, if their acidity is less than 0.8%, “extra virgin” olive oils. These oils contain the majority of the polyphenols in the starting olives and, after centrifugation and filtration, can be consumed as is.

On the other hand, some olive varieties give an inferior quality oil due to too high acidity (> 2%) and/or an unpleasant smell and taste that does not meet the established criteria. These oils, which are unfit for consumption, are called “lampantes” (a name which comes from their ancient use as fuel in oil lamps) and must be refined as is done for other vegetable oils, i.e. using different physicochemical procedures (neutralization with soda, high temperature bleaching and deodorization, hexane extraction, etc.). These steps remove the compounds responsible for the excess acidity and the unpleasant taste of the oil and produce a “neutral” olive oil that has lost its acidity and its flaws, but that is now devoid of the smell, flavour, colour and most of the phenolic components of the starting virgin olive oil. To stabilize these oils and improve their taste, a certain proportion (15–20%) of virgin olive oil is subsequently added and the final product, which is a mixture of refined olive oil and virgin olive oil, is what is sold in grocery stores as “pure olive oil” or simply “olive oil”. These manufacturing differences obviously have a huge impact on the amount of polyphenols present in virgin, extra virgin, and refined oils (Table 1). For OO-type olive oils (which contain refined oils), the polyphenols come exclusively from virgin olive oil that has been added to restore a minimum of taste and colour (from yellow to greenish) to the chemically treated oil. The amount of these polyphenols is therefore necessarily less than in VOO and EVOO and, as a general rule, does not exceed 25–30% of the content of these two oils. This difference is particularly striking for certain polyphenols of the secoiridoid family (oleuropein, oleocanthal, oleacein and ligstroside) whose concentrations are 3 to 6 times greater in EVOO than in OO (Table 1). It should be noted, however, that these values ​​can vary greatly depending on the origin and cultivar of the olives; for example, some extra virgin olive oils have been found to contain up to 10 times more hydroxytyrosol and tyrosol than regular olive oils. The same goes for other polyphenols like oleocanthal: an analysis of 175 distinct extra virgin olive oils from Greece and California revealed dramatic variations between the different oils, with concentrations of the molecule ranging from 0 to 355 mg/kg.

It should also be mentioned that even if the quantities of phenolic compounds in regular olive oil are lower than those found in virgin and extra virgin oils, they nevertheless largely exceed those present in other vegetable oils (sunflower, peanut, canola, soy), which contain very little or none at all.

Anti-inflammatory spiciness
The amounts of polyphenols contained in a bottle of olive oil are not indicated on its label, but it is possible to detect their presence simply by tasting the oil. The polyphenols in olive oil are indeed essential to the organoleptic sensations so characteristic of this oil, in particular the sensation of tickling or stinging in the throat caused by good quality extra virgin oils, what connoisseurs call “ardour”. Far from being a defect, this ardour is considered by experts as a sign of a superior quality oil and, in tasting competitions, the “spiciest” oils are often those that receive the highest honours.

It is interesting to note that it is by tasting different olive oils that a scientist succeeded, by coincidence, in identifying the molecule responsible for the sensation of spiciness caused by extra virgin olive oil (see box).

Chance often plays a role in scientific discoveries, and this is especially true when it comes to the discovery of the molecule responsible for the typical irritation caused by olive oil. On a trip to Sicily (Italy) to attend a conference on the organoleptic properties of different foods, Dr. Gary Beauchamp and his colleagues were invited by the organizers of the event to a meal where guests were encouraged to taste extra virgin olive oil from olive trees cultivated on their estate. Even though it was the first time he had tasted this type of olive oil, Dr. Beauchamp was immediately struck by the tingling sensation in his throat, which was similar in every way to that caused by ibuprofen, and that he had experienced multiple times as part of his work to replace acetaminophen (paracetamol) with ibuprofen in cough syrups. Suspecting that olive oil contained a similar anti-inflammatory drug, Dr. Beauchamp and his team subsequently managed to isolate the molecule responsible for this irritation, a polyphenol they called “oleocanthal”. They subsequently discovered that oleocanthal had, like ibuprofen, a powerful anti-inflammatory action and that regular consumption of extra virgin olive oil, rich in oleocanthal, provided an intake equivalent to about 10 mg of ibuprofen and therefore may contribute to the well-documented anti-inflammatory effects of the Mediterranean diet.

But why is the stinging sensation of olive oil only felt in the throat? According to work carried out by the same group, this exclusive localization is due to a specific interaction of oleocanthal (and ibuprofen, for that matter) with a subtype of heat-sensitive receptor (TRPA1). Unlike other types of heat receptors, which are evenly distributed throughout the oral cavity (the TRPV1 receptor activated by the capsaicin of chili peppers, for example, and which causes the burning sensation of some particularly hot dishes), the TRPA1 receptor is located only in the pharynx and its activation by oleocanthal causes a nerve impulse signalling the presence of an irritant only in this region. In short, the more an olive oil stings in the back of the throat, the more oleocanthal it contains and the more anti-inflammatory properties it has. As a general rule, extra virgin olive oils contain more oleocanthal (and polyphenols in general) than virgin olive oils (see Table 1) and are therefore considered superior, both in terms of taste and their positive effects on health.

The superiority of extra virgin olive oil
Several studies have shown that the higher polyphenol content in extra virgin olive oil is correlated with a greater positive effect on several parameters of cardiovascular health than that observed for regular olive oil (see Table 2). For example, epidemiological studies carried out in Spain have reported a decrease of about 10–14% in the risk of cardiovascular disease among regular consumers of extra virgin olive oil, while regular consumption of olive oil had no significant effect. A role of phenolic compounds is also suggested by the EUROLIVE study where the effect of daily ingestion, over a period of 3 weeks, of 25 mL of olive oils containing small (2.7 mg/kg), medium (164 mg/kg), or high (366 mg/kg) amounts of polyphenols was compared. The results show that an increased intake of polyphenols is associated with an improvement in two important risk factors for cardiovascular disease: an increase in the concentration of HDL cholesterol and a decrease in oxidized LDL cholesterol levels. Collectively, the data gathered from the intervention studies indicate that the polyphenols found in extra virgin olive oil play an extremely important role in olive oil’s positive effects on cardiovascular health.

Table 2. Examples of studies comparing the effect of EVOO and OO on several cardiovascular health parameters.

In addition to its multiple direct actions on the heart and vessels, it should also be noted that extra virgin olive oil could also exert an indirect beneficial effect, by blocking the formation of the metabolite trimethylamine N-oxide (TMAO) by intestinal bacteria. Several studies have shown that TMAO accelerates the development of atherosclerosis in animal models and is associated with an increased risk of cardiovascular events in clinical studies. Extra virgin olive oils (but not regular olive oils) contain 3,3-dimethyl-1-butanol (DMB), a molecule that blocks a key enzyme involved in TMAO production and prevents development of atherosclerosis in animal models fed a diet rich in animal protein. Taken together, these observations show that there are only advantages to favouring the use of extra virgin olive oil, both for its superior taste and its positive effects on cardiovascular health.

Some people may dislike the slightly peppery taste that extra virgin olive oil leaves in the back of the throat, but interestingly, this irritation is greatly reduced when the oil is mixed with other foods. According to a recent study, this attenuation of the pungent taste is due to the interaction of the polyphenols in the oil with the proteins in food, which blocks the activation of the heat receptors that are normally activated by these polyphenols. People who hesitate to use extra virgin olive oil because of its irritant side can therefore get around this problem and still enjoy the benefits of these oils simply by using it as the main fat when preparing a meal.