Phthalates: A component of certain plastics and cosmetic products harmful to human health 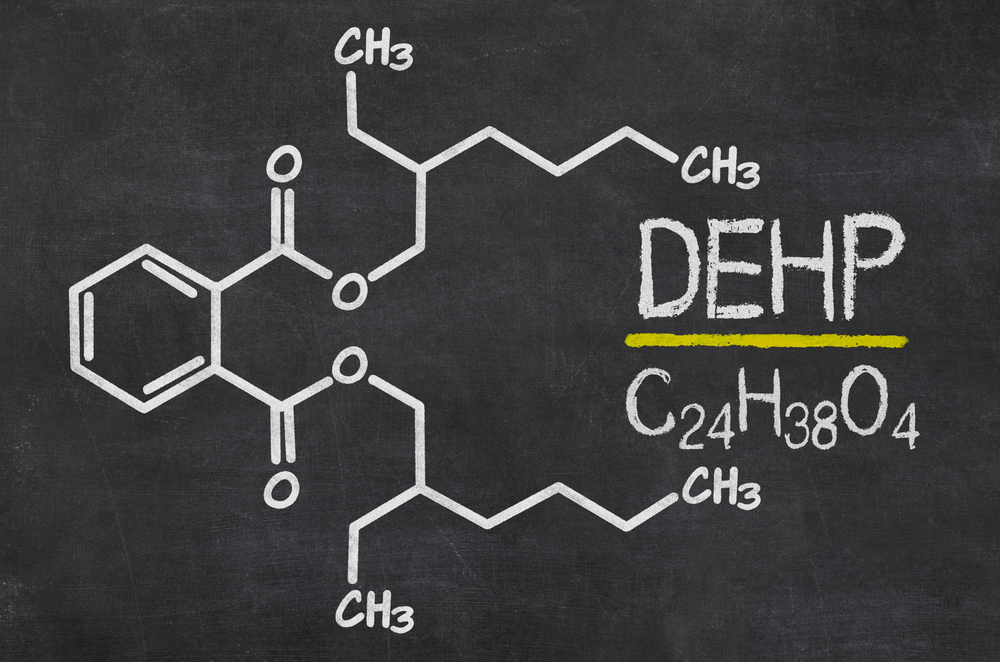 Since these phthalates are not chemically bound to plastics, they are released into the environment over time and can enter the human body by ingestion, inhalation and absorption through the skin. Once in the body, phthalates are rapidly metabolized and excreted in urine and faeces, so that half of the phthalates are eliminated within 24 hours of entering the body. Despite this rapid elimination, the population is permanently exposed to phthalates since these products are present in consumer products used almost every day. Metabolites of the phthalates DEHP and DiNP are detected in 98% of the total United States population. Daily exposure to a widely used phthalate, DEHP, has been estimated to range from 3 to 30 µg/kg/day, or 0.21 mg to 2.1 mg per day for a person weighing 70 kg (154 lb.). Figure 1. Chemical structure of the phthalates most commonly used in industry.

Phthalates and cardiovascular and all-cause mortality
A study of 5,303 adults in the National Health and Nutrition Examination Survey (NHANES) cohort assessed the association between phthalate exposure and mortality. Participants provided a urine sample in which the major metabolites of phthalates were measured. Exposure to high-molecular weight phthalates was associated with a significant increase in cardiovascular and all-cause mortality during the duration of the study (2001 to 2010). No significant association was observed for exposure to low-molecular weight total phthalates. Participants who were more exposed to high-molecular weight phthalates (third tertile) had a 48% higher risk of death from any cause than participants who were less exposed (first tertile). Examination of the risk associated with each of the phthalate metabolites revealed an association between an elevated urinary level and a 64% increased risk of cardiovascular mortality for monoethyl phthalate (MEP, a low-molecular weight phthalate). The presence of elevated concentrations of two DEHP (high-molecular weight phthalate) metabolites, MEHHP and MECPP, was associated with a 27% and 32% increased risk of all-cause mortality, respectively, compared to the presence of lower concentrations of these metabolites. A third metabolite of DEHP, MEOHP, was associated with a 74% higher risk of cardiovascular mortality (3rd tertile vs. 1st tertile). Extrapolating the results of their study to the US population aged 55 to 64, the authors estimate that approximately 100,000 deaths/year could be attributed to phthalate exposure, at a societal cost of approximately $39 billion.

Phthalates and where food comes from
One study assessed the phthalate exposure of participants in the NHANES cohort, depending on whether they had a meal the day before outside the home (restaurant, fast food chain, cafeteria) or at home. People who ate out had an average of 35% more phthalates in their urine the next day than people who ate at home, mostly foods purchased from the grocery store. The association between eating out and high urinary phthalate concentration was strongest in adolescents. Among teens, those who reported being heavy consumers of fast food and other foods bought outside the home had up to 55% higher phthalate levels than teens who ate at home. Consumption of certain foods in particular, most notably cheeseburgers and similar sandwiches, was associated with increased cumulative exposure to phthalates, but only when these foods were consumed in cafeterias, fast food outlets, and other restaurants. The study authors find the situation worrisome because almost 2/3 of the population in the United States eats food outside of the home at least once a day.

Phthalates and other plasticizers in fast food
A 2021 study measured the levels of phthalates and another plasticizer in samples of burgers, fries, chicken nuggets, chicken burritos and cheese pizza, as well as in plastic gloves used in fast food restaurants to handle food. Samples came from restaurants of major U.S. chains McDonald’s, Burger King, Pizza Hut, Domino’s, Taco Bell, and Chipotle in the San Antonio, Texas area. DEHT, a new plasticizer used as a replacement for phthalates, was detected in highest amounts in food (median: 2.5 mg/kg) and in gloves (28–37% by weight). DnBP and DEHP phthalates were detected in 81% and 70% of food samples, respectively. DEHT concentrations were particularly high in burritos (6 mg/kg) and in burgers (2.2 mg/kg), and this plasticizer was not present in French fries. Cheese pizza contained the lowest levels of plasticizing chemicals (phthalates or not) among the fast food items analyzed. It should be noted that, unlike phthalates, little data is currently available on the toxicity and health effects of new plasticizers such as DEHT, even though they are increasingly used in industry. The results of this study have implications for equity since the African American population in the United States consumes more fast food than other ethnic groups and is more exposed to chemicals from other sources in the United States in their environment.

Phthalates: endocrine disruptors
In a review of all studies on the impact of phthalate exposure on human health, the authors found strong evidence of unfavourable associations for neurodevelopment, sperm quality, and asthma risk in children, as well as moderate to strong evidence of an association with an anogenital distance abnormality in boys (a marker of exposure to endocrine disruptors). Associations between phthalate exposure and the incidence of type 2 diabetes, endometriosis, low birth weight, low testosterone, ADHD, breast and uterine cancer have also been identified with a moderate level of evidence. Finally, other associations have been identified, but with a lower level of evidence, including premature birth, obesity, autism and hearing loss.

Implications for the public
Standards have been adopted in several countries to limit and, in some cases, prohibit the use of phthalates. For example, the use of certain phthalates in toys for very young children has been banned, as they chew and suck their toys. In cosmetics, the use of DEHP, the most problematic phthalate for health, is banned in Europe and in Canada. According to the European Chemicals Agency (ECHA), the derived no-effect levels (DNEL, or “safe dose”) are 34 µg/kg for DEHP, 8.3 µg/kg for DiBP, 6.7 µg/kg for DnBP, and 500 µg/kg for BBzP. This European agency recommended that the use of these 4 phthalates in the form of mixtures in products be limited to 0.1% (w/w) and that the exception for the use of DEHP in the packaging of medical products be abolished.

A significant problem with these “safe doses” was highlighted for DEHP phthalate since, according to a review of 38 articles, the maximum exposure to DEHP measured in the population is more than 6 times greater than the derived no-effect level (242 vs. 34 µg/kg). In addition, for three other phthalates (DiBP, DnBP and BBzP), the authors reported that adverse health effects were associated with exposure levels much lower than the derived no-effect level established by the ECHA. Among these adverse health effects are increased eczema in children, behavioural changes in children, increased body mass index and waist circumference in women and men, and impacts on the fertility of women and men.

Here are some suggestions for limiting exposure to phthalates: