Choosing dietary sources of unsaturated fats has many health benefits OVERVIEW
Most nutrition experts now agree that a reduction in saturated fat intake combined with an increased intake of quality unsaturated fat (especially monounsaturated and polyunsaturated omega-3) represents the optimal combination of fat to prevent cardiovascular disease and reduce the risk of premature death. The current consensus, recently summarized in articles published in the journals Science and BMJ, is therefore to choose dietary sources of unsaturated fats, such as vegetable oils (particularly extra virgin olive oil and those rich in omega-3s such as canola), nuts, certain seeds (flax, chia, hemp) and fatty fish (salmon, sardine), while limiting the intake of foods mainly composed of saturated fats such as red meat. This roughly corresponds to the Mediterranean diet, a way of eating that has repeatedly been associated with a decreased risk of several chronic diseases, especially cardiovascular disease.

Yet despite this scientific consensus, the popular press and social media are full of conflicting information about the impact of different forms of dietary fat on health. This has become particularly striking since the rise in popularity of low-carbohydrate (low-carb) diets, notably the ketogenic diet, which advocates a drastic reduction in carbohydrates combined with a high fat intake. In general, these diets make no distinction as to the type of fat that should be consumed, which can lead to questionable recommendations like adding butter to your coffee or eating bacon every day. As a result, followers of these diets may eat excessive amounts of foods high in saturated fat, and studies show that this type of diet is associated with a significant increase in LDL cholesterol, an important risk factor for cardiovascular disease. According to a recent study, a low-carbohydrate diet (<40% of calories), but that contains a lot of fat and protein of animal origin, could even significantly increase the risk of premature death.

As a result, there is a lot of confusion surrounding the effects of different dietary fats on health. To get a clearer picture, it seems useful to take a look at the main differences between saturated and unsaturated fats, both in terms of their chemical structure and their effects on the development of certain diseases. 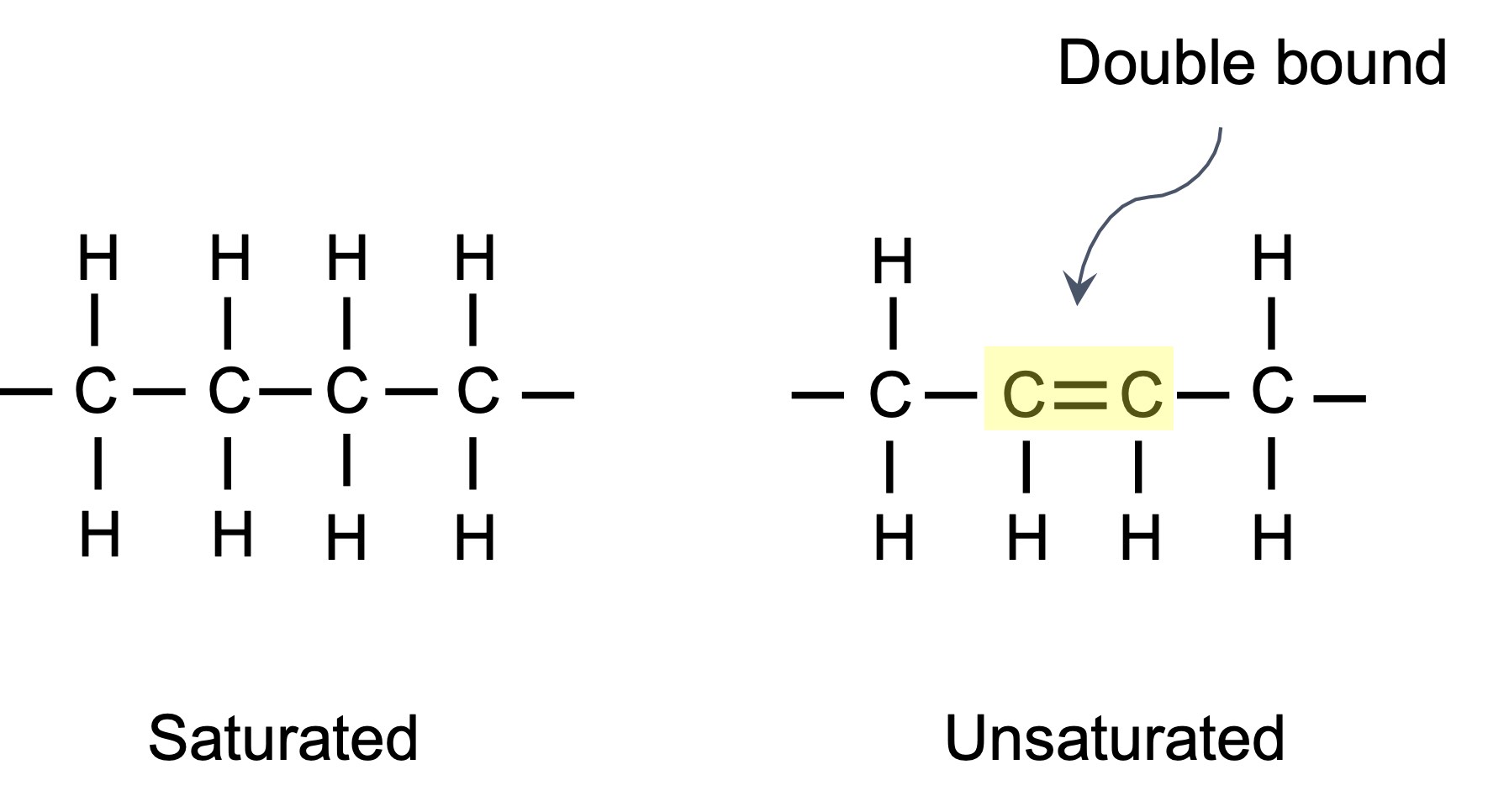 These differences in saturation have a great influence on the physicochemical properties of fatty acids. When saturated, fatty acids are linear chains that allow molecules to squeeze tightly against each other and thus be more stable. It is for this reason that butter and animal fats, rich sources of these saturated fats, are solid or semi-solid at room temperature and require a source of heat to melt. 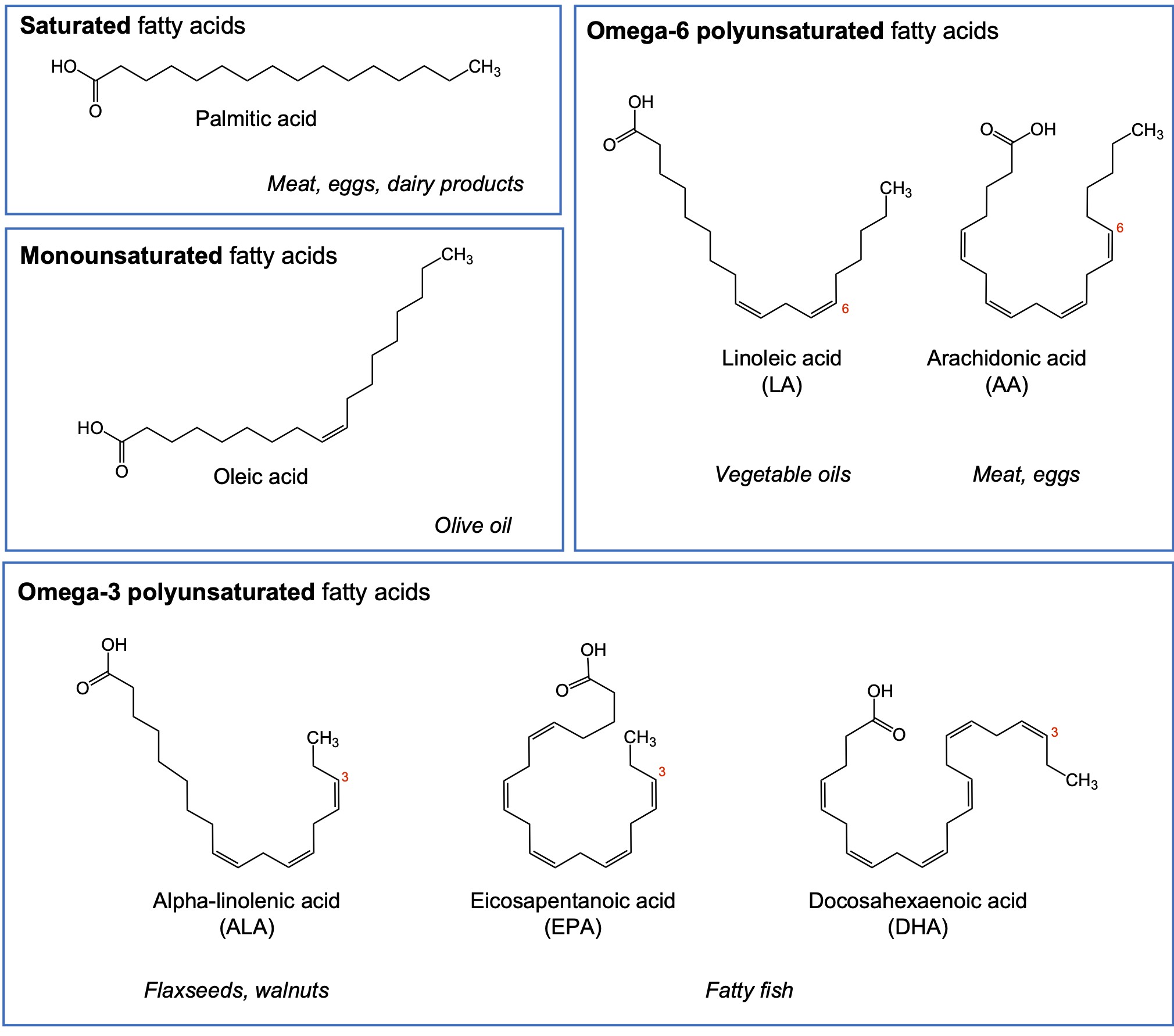 Figure 1. Structure of the main types of saturated, monounsaturated and polyunsaturated omega-3 and omega-6 fats. The main food sources for each fat are shown in italics.

Polyunsaturated fats can be classified into two main classes, omega-3 and omega-6. The term omega refers to the locationof the first double bond in the fatty acid chain from its end (omega is the last letter of the Greek alphabet). An omega-3 or omega-6 polyunsaturated fatty acid is therefore a fat whose first double bond is located in position 3 or 6, respectively (indicated in red in the figure).

It should be noted that there is no food that contains only one type of fat. On the other hand, plant foods (especially oils, seeds and nuts) are generally made up of unsaturated fats, while those of animal origin, such as meat, eggs and dairy products, contain more saturated fat. There are, however, exceptions: some tropical oils like palm and coconut oils contain large amounts of saturated fat (more than butter), while some meats like fatty fish are rich sources of omega-3 polyunsaturated fats such as eicosapentaenoic (EPA) and docosahexaenoic (DHA) acids.

Physiological roles of fatty acids
All fatty acids, whether saturated or unsaturated, play important roles in the normal functioning of the human body, especially as constituents of cell membranes and as a source of energy for our cells. From a dietary point of view, however, only polyunsaturated fats are essential: while our metabolism is capable of producing saturated and monounsaturated fatty acids on its own (mainly from glucose and fructose in the liver), linoleic (omega-6) and linolenic (omega-3) acids must absolutely be obtained from food. These two polyunsaturated fats, as well as their longer chain derivatives (ALA, EPA, DHA), play essential roles in several basic physiological functions, in particular in the brain, retina, heart, and reproductive and immune systems. These benefits are largely due to the degree of unsaturation of these fats, which gives greater fluidity to cell membranes, and at the same time facilitate a host of processes such as the transmission of electrical impulses in the heart or neurotransmitters in the synapses of the brain. In short, while all fats have important functions for the functioning of the body, polyunsaturated fats clearly stand out for their contribution to several processes essential to life.

Impacts on cholesterol
Another major difference between saturated and unsaturated fatty acids is their respective effects on LDL cholesterol levels. After absorption in the intestine, the fats ingested during the meal (mainly in the form of triglycerides and cholesterol) are “packaged” in structures called chylomicrons and transported to the peripheral organs (the fatty tissue and the muscles, mainly) where they are captured and used as a source of energy or stored for future use. The residues of these chylomicrons, containing the portion of excess fatty acids and cholesterol, are then transported to the liver, where they are taken up and will influence certain genes involved in the production of low-density lipoproteins (LDL), which serve to transport cholesterol, as well as their receptors (LDLR), which serve to eliminate it from the blood circulation.

And this is where the main difference between saturated and unsaturated fats lies: a very large number of studies have shown that saturated fats (especially those made up of 12, 14 and 16 carbon atoms) increase LDL production while decreasing that of its receptor, with the result that the amount of LDL cholesterol in the blood increases. Conversely, while polyunsaturated fats also increase LDL cholesterol production, they also increase the number and efficiency of LDLR receptors, which overall lowers LDL cholesterol levels in the blood. It has been proposed that this greater activity of the LDLR receptor is due to an increase in the fluidity of the membranes caused by the presence of polyunsaturated fats which would allow the receptor to recycle more quickly on the surface liver cells (and therefore be able to carry more LDL particles inside the cells).

A very important point of these studies, which is still poorly understood by many people (including some health professionals), is that it is not only a reduction of saturated fat intake that counts for improving the health of the heart and vessels, but most importantly the source of energy that is consumed to replace these saturated fats. For example, while the substitution of saturated fats by polyunsaturated fats, monounsaturated fats or sources of complex carbohydrates like whole grains is associated with a substantial reduction in the risk of cardiovascular disease, this decrease is completely abolished when saturated fats are replaced by trans fats or poor quality carbohydrate sources (e.g., refined flours and added sugars) (Figure 2). Clinical studies indicate that the negative effect of an increased intake of simple sugars is caused by a reduction in HDL cholesterol (the good one) as well as an increase in triglyceride levels. In other words, if a person decreases their intake of saturated fat while simultaneously increasing their consumption of simple carbohydrates (white bread, potatoes, processed foods containing added sugars), these sugars simply cancel any potential cardiovascular benefit from reducing saturated fat intake. Another implication of these results is that one should be wary of “low-fat” or “0% fat” products, even though these foods are generally promoted as healthier. In the vast majority of cases, reducing saturated fat in these products involves the parallel addition of simple sugars, which counteracts the positive effects of reducing saturated fat.

This increased risk from simple sugars largely explains the confusion generated by some studies suggesting that there is no link between the consumption of saturated fat and the risk of cardiovascular disease (see here and here, for example). However, most participants in these studies used simple carbohydrates as an energy source to replace saturated fat, which outweighed the benefits of reduced intake of saturated fat. Unfortunately, media coverage of these studies did not capture these nuances, with the result that many people may have mistakenly believed that a high intake of saturated fat posed no risk to cardiovascular health.

In conclusion, it is worth recalling once again the current scientific consensus, stated following the critical examination of several hundred studies: replacing saturated fats by unsaturated fats (monounsaturated or polyunsaturated) is associated with a significant reduction in the risk of cardiovascular disease. As mentioned earlier, the easiest way to make this substitution is to use vegetable oils as the main fatty substance instead of butter and to choose foods rich in unsaturated fats such as nuts, certain seeds and fatty fish (salmon, sardine), while limiting the intake of foods rich in saturated fats such as red meat. It is also interesting to note that in addition to exerting positive effects on the cardiovascular system, recent studies suggest that this type of diet prevents excessive accumulation of fat in the liver (liver steatosis), an important risk factor of insulin resistance and therefore type 2 diabetes. An important role in liver function is also suggested by the recent observation that replacing saturated fats of animal origin by mono- or polyunsaturated fats was associated with a significant reduction in the risk of hepatocellular carcinoma, the main form of liver cancer. Consequently, there are only advantages to choosing dietary sources of unsaturated fat.