It is well established that regular physical exercise improves lipid levels, glucose tolerance, and insulin sensitivity, all of which are cardiovascular risk factors. One question researchers have been asking in recent years is whether a single exercise session can, after a period of prolonged physical inactivity, have a positive impact on the risk factors associated with a sedentary lifestyle. This is an important issue as more and more workers are sitting for long hours at the office or in their car, and many of them do not have time to exercise more than once a week.

In a randomized controlled trial published in 2019 in the Journal of Applied Physiology, participants (n = 10) first spent four days without exercise, sitting for much of the day (≈13.5 hours/day). At the end of the fourth day, half of the participants did one hour of intense treadmill exercise (60–65% VO2max) and the other half remained inactive. On the morning of the fifth day, after fasting for 12 hours, all participants consumed a meal high in fat and glucose. Blood samples were taken before and every hour (up to 6 h) after the meal, and triglycerides, glucose and insulin were measured. After a rest period of several days, the experiment was repeated by swapping the groups (crossover study design).

No significant differences in plasma levels of triglycerides, glucose or insulin were found between the two groups. The authors conclude that prolonged physical inactivity (e.g., sitting about 13.5 hours/day and walking fewer than 4,000 steps/day) creates conditions where people become “resistant” to the metabolic improvements that are normally achieved after an aerobic exercise session. It is therefore important to develop good habits at work and at home (take active breaks, work standing, etc.), in order to fully benefit from the positive effects of exercise during leisure time.

A similar study published in 2016 came to comparable conclusions. The researchers randomized the participants into three groups: 1) sitting >14 h/day and a high-calorie diet; 2) sitting >14 h/day and a balanced diet; 3) active: standing, walking, sitting 8.4 h/day and a balanced diet. In addition to being randomized, the study had a crossover design, i.e., subjects participated in three five-day interventions (one week of rest between each intervention), changing groups each time. On the evening of the fourth day, the participants did treadmill running for 1 hour (67% VO2max). On the third and fifth day, participants consumed a high-fat meal (high-fat tolerance test) and blood tests were taken before and every hour (up to 6 hours) after the meal. Triglycerides, free fatty acids, glucose, and insulin were subsequently assayed in the plasma of the various samples collected.

A meta-analysis of 13 population studies assessed the ability of physical activity to eliminate or reduce the association between sitting time and all-cause mortality. These studies were conducted with more than 1 million people who were followed from 2 to 18.1 years. The results (Figure 1) show a very clear dose-effect relationship between the amount of exercise and the reduction in the relative risk of mortality associated with sitting or watching television. High levels of moderate physical activity (i.e., approximately 60–75 min/day) appear to eliminate the increased risk of mortality associated with long periods of sitting (Figure 1A). However, high levels of physical activity significantly alleviate, but do not eliminate the risk of mortality associated with long periods (> 5 h) spent watching television (Figure 1B). 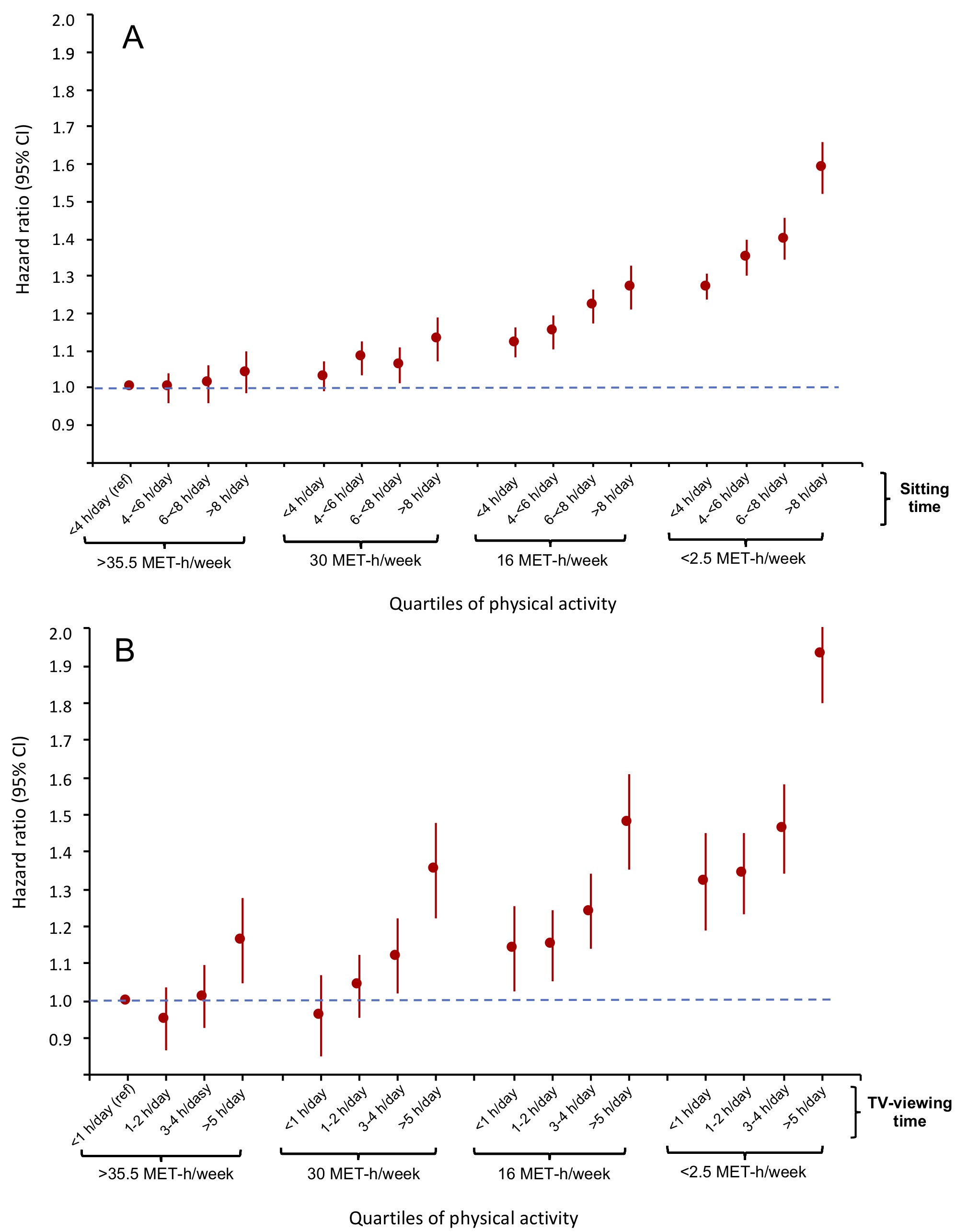 The amount of physical activity in the highest quartile (> 35.5 MET-h/week) is equivalent to approximately 60–75 minutes of moderate-intensity exercise per day. This is much more than the minimum recommended by public health organizations (150 min/week). However, among those who do 16 MET-h/week, which is equivalent to 25–35 minutes of moderate-intensity physical activity, the increased risk of mortality associated with long periods of sitting (> 8 h/day) is less marked than for people in the least active group (<2.5 MET-h/week, equivalent to about 5 min of exercise per day). The increased risk of mortality (58%) for those who are less active and who sit more than 8 hours a day is similar to that associated with other risk factors such as smoking and obesity.

Why are the results for sitting time and television-viewing time different? This may be due in part to differences in the accuracy with which these behaviours are reported, but the authors of the study propose other plausible explanations: 1) people usually watch television in the evening, normally after dinner, and a prolonged sedentary episode after a meal could be particularly harmful to the metabolism of lipids and glucose; 2) people likely take more active breaks during work than during the viewing of TV programs, and it appears that these breaks are beneficial in reducing several cardiometabolic risk factors; 3) It is also plausible that people who watch television consume more “snacks” or obesogenic food.

Spending long periods of time in a sitting position is very common in our modern societies and this will only increase with future technological and social innovations. In addition to promoting regular physical exercise, public health organizations will likely also need to include a reduction in sedentary time in their guidelines and emphasize the importance of taking “active” breaks. Taking short active breaks may mean walking for a minute, drinking water, and getting up when talking on the phone. We must develop strategies to avoid sitting for long periods of time. In addition, we need to find the time to do at least 150 minutes of moderate exercise a week, up to 300 minutes a week to get maximum health benefits.