Active transportation, a great way to balance work and health 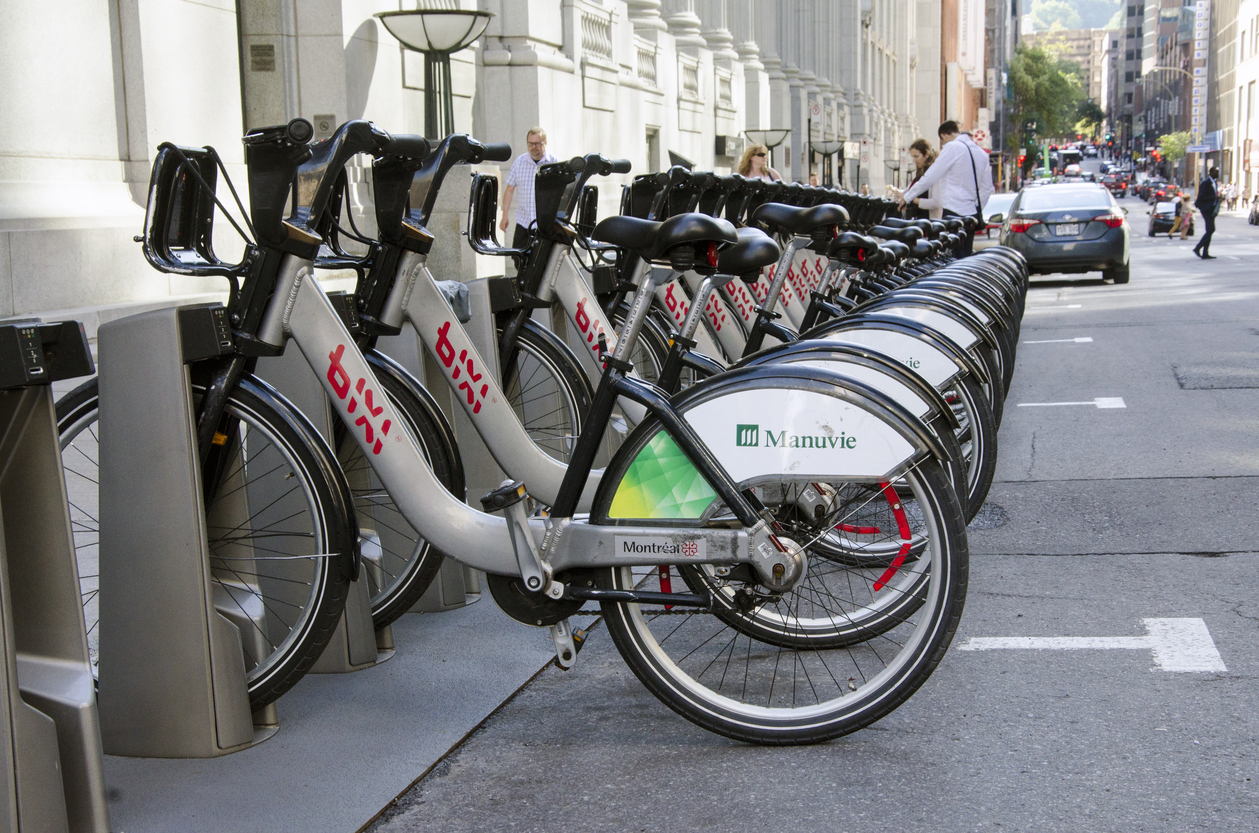 Although regular physical activity is associated with a marked decrease in the risk of several chronic diseases and premature mortality, the proportion of sedentary people, i.e. who do not reach the minimum of 150 minutes of physical activity recommended per week, continues to increase worldwide. According to recent estimates, a sedentary lifestyle is directly responsible for about 10% of premature deaths worldwide, a negative impact similar to that of smoking and obesity. Several factors contribute to this decline in the level of physical activity, the most important of which are probably the major social transformations that accompanied industrialization and, more recently, the technological revolution: motorized transport modes make it possible to travel great distances easily, computing is at the centre of many professions, and the constant arrival of new electronic devices continues to reduce the energy costs of most of our activities, both at work and at home. While this progress can generally be viewed as positive in terms of improving quality of life, it is important to remain aware that the resulting decrease in physical activity can be detrimental to health.

Canada is not immune to this trend, as studies that have measured physical activity levels accurately (using an accelerometer) show that only 15% of adults are active enough to reach the minimum of 150 minutes of physical activity per week. This is very little, and although lack of time is the main reason given by sedentary people for their low participation in physical activity, this excuse does not really hold up: 29% of Canadian adults spend 15 hours or more per week (more than two hours a day) in front of the TV and 15% are frequent computer users (11 hours or more per week) during leisure time. There is therefore a window of time available to reduce the sedentary lifestyle, especially since it is possible to be more active without having to dedicate a specific period of the day to exercise: several studies show that the simple fact of integrating light or moderate physical activities in our daily routine, whether walking, gardening or doing housework, is enough to enjoy the benefits of exercise on health (see our article on this subject).

Active transportation
The time spent commuting to and from work represents another interesting opportunity to increase the level of physical activity. In Canada, the use of motorized means of transportation to get to work is widespread, with 8 out of 10 workers using a motor vehicle for daily commuting (75% as drivers, 5% as passengers) (Figure 1). Conversely, active modes of transport such as walking and cycling are used by only 8% of workers, a proportion that is much lower than in most European countries: in Holland for example, no less than 50% of all daily trips are made by walking and cycling, while in all Nordic countries (Denmark, Sweden, Norway and Finland) this proportion is around 30%. Figure 1. Distribution of the modes of transportation used by Canadians to get to work. From Statistics Canada (2013).

This low use of active transportation in North America likely contributes to the negative impacts of a sedentary lifestyle, particularly with respect to the high proportion of people who are overweight. It has been estimated that each hour spent in a car is associated with a 6% increase in the risk of obesity, while every kilometre walked is associated with a 5% reduction in the risk of being overweight. For example, an Australian study that followed 822 people over 4 years found that those who travelled every day by car tended to have greater weight gain (2.18 kg) than those who did not use a car (0.46 kg). This is in agreement with the results of a British study showing that people who stopped using their car to get to work and replaced it with active transportation or public transit lost weight (- 0.30 kg/m2). Conversely, those who stopped using active modes of transportation and instead opted for the car saw their body mass index significantly increase (+ 0.32 kg/m2).

In addition to promoting the maintenance of a healthy weight, several studies have shown that active transportation also has several positive effects on health, particularly in terms of prevention of cardiovascular disease, type 2 diabetes and premature mortality. One of the best examples is a large study of 263,540 participants living in 22 communities in the United Kingdom. By analyzing the modes of transportation used by this population to get to work, the researchers found that cyclists had a 41% lower risk of premature mortality than those who used motorized transport (public or cars). A positive effect was also observed for walkers, with a 27% reduction in the risk of myocardial infarction and a 36% reduction in the risk of dying from a cardiovascular event. Overall, a meta-analysis of 23 prospective studies that examined this issue (531,333 participants in total) shows that commuters who use active transportation (cycling, walking) have a significantly lower risk of cardiovascular disease (9%), type 2 diabetes (30%), and premature mortality (8%). As with any form of physical activity, these benefits associated with active transportation come from the many positive effects of this type of exercise on all cardiovascular risk factors, including hypertension, dyslipidemia, diabetes and obesity (Table 1).


The benefits of cycling
The positive impacts of active transportation are particularly striking for those who travel by bicycle, with higher reductions in the risk of several chronic diseases and premature mortality than those who walk (Figure 2). These benefits associated with regular cycling are in line with Danish and British studies indicating that premature mortality rates are about 30% lower for cyclists compared to non-cyclists. This superiority of cycling over walking is probably due to the fact that cyclists in these studies showed a higher level of overall physical activity than walkers, with 90% of the people travelling by bicycle who reached the minimum recommended activity against 54% for those who travel on foot. Figure 2. Reduced risk of several chronic diseases depending on the mode of active transportation. Adapted from Dinu et al. (2019).

Intervention studies carried out among sedentary people show that the positive effects of active bicycle transportation on health can be observed in the first six months following the adoption of this mode of transport. For example, people who cycle 20 minutes daily to commute to work for 8 weeks already show a noticeable improvement in their maximum aerobic fitness (VO2max), one of the best markers of good health. More recently, a British study showed that only 6 months of active bicycle transportation resulted in abdominal fat loss and significant improvement in insulin sensitivity in a group of sedentary people who were overweight or obese. The positive impact of active transportation is therefore very rapid, and these modes of transport can really contribute to improving the health of sedentary people.

It is also interesting to note that the benefits of active bicycle transportation on the reduction of all-cause mortality and type 2 diabetes are similar to those observed among people who cycle in their leisure time (Figure 3). For people who lack the time to exercise during the week or the weekend, riding a bike to work compensates for this lack of time by integrating physical activity into their daily routine. Not to mention that some studies suggest that the bicycle is the mode of transport that makes you happiest! Figure 3. Risk of premature death for people who use bicycles in leisure time or as an active means of transportation. Adapted from Østergaard et al. (2018).

Fragmented transport
Walking or cycling to work is obviously not within everyone’s reach, especially for people who have to travel long distances from home to their workplace (in Canada, for example, over half of workers live more than 8 km from their work). On the other hand, even without completely replacing the use of motorized vehicles, it is still possible to be more physically active by walking or cycling for a portion of the journey (using bicycle-sharing systems), for example by parking the car at a certain distance from work or by getting off the bus or the metro a few stops earlier. For commuters using motorized transportation, the mere fact of walking the last kilometre (about 10 minutes) to and from work is equivalent to 100 minutes of physical activity per work week, a good proportion of the minimum recommended exercise. This is a worthwhile investment of time: in the British study mentioned earlier, even if the maximum protection (41%) is observed among commuters who make the entire trip by bike, people who used this mode of transportation for only part of the journey still had a 24% lower risk of premature mortality compared to those who travelled exclusively by motorized transport.

Built environment
In North America, land use planning is unfortunately not very favourable to active transportation. In most cases, the cities developed after the invention of the automobile, which resulted in the construction of infrastructure focused mainly on the use of the car as a means of transport and therefore favoured urban sprawl. In Europe, the cities are older and were built before the advent of motorized transport, leaving in place infrastructure more conducive to non-motorized travel. For example, the proportion of workers who use bicycles as a means of transportation to work is 10 times higher in some European cities such as Copenhagen and Amsterdam than in North America (Figure 4). 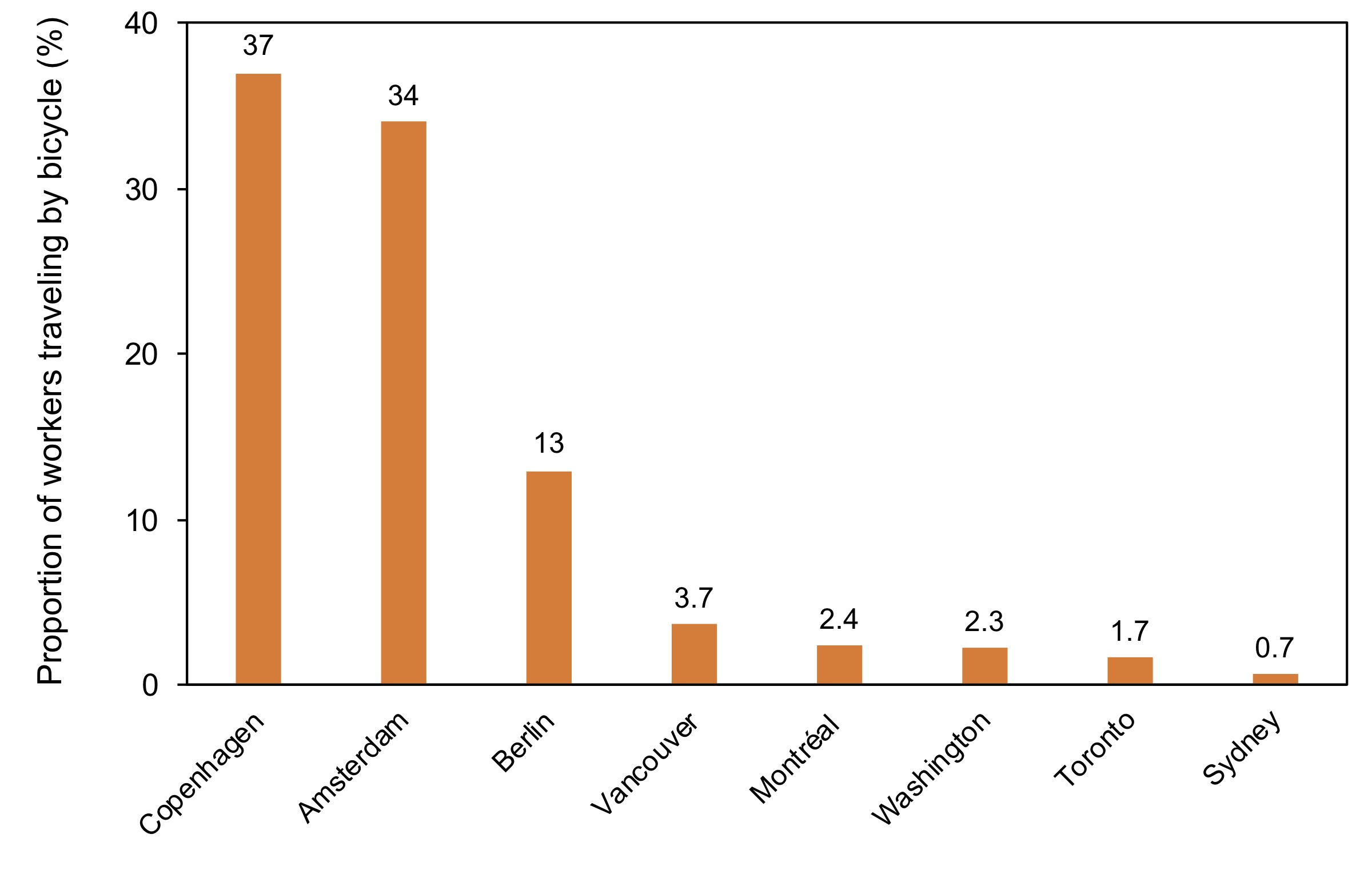 Figure 4. Comparison of active bicycle transportation in various international cities. Adapted from Buehler and Pucher (2012). It should be noted that the data for Montréal are from 2006, so before the implementation of the bike-sharing system (Bixi). The proportion of bike users has increased since then to 3.2% in 2011, and Montréal is now ranked 18th cycling metropolis in the world.

To promote active transportation, we must therefore rethink what is called the “built environment”, i.e. the overall infrastructure that is part of our daily life, such as buildings, parks, schools, the road network, food sources (grocery stores, restaurants) or recreational facilities. Several studies have shown that people who live in cities where distances are reduced, streets are well connected, shops easily accessible and where areas for walking and cycling are well demarcated and safe are more physically active and in better cardiovascular health. It is therefore to be hoped that this type of built environment will become the norm in the near future.