Exercise to live longer
Physical activity has many and varied beneficial effects on cardiovascular risk factors, including lower blood pressure and resting heart rate, improved blood sugar and lipidemia, normalizing body mass index, improved sleep and reduced stress. According to several long-term epidemiological studies, regular physical activity is one of the most effective lifestyle habits to increase life expectancy, up to 6 years.

Can too much exercise be detrimental to longevity?
This is an issue that is the subject of debate due to the conflicting data published to date. A meta-analysis published in October 2019 concludes that high amounts of exercise (up to 8 times the amount of exercise recommended by public guidelines) do not reduce longevity. This meta-analysis included 48 prospective studies, one of which included 6 distinct cohorts and another 9 distinct cohorts. Compared to the recommended level of physical activity (150 minutes of moderate to intense exercise per week), the mortality risk was lower for people who exercised more, at least up to 10 hours of running per week (Figure 1). This applies to all-cause mortality, and even more so to mortality from cardiovascular disease, including coronary heart disease. It should be noted that the reduction in mortality risk appears to be directly proportional to the amount of exercise up to about 2 hours of running per week and that more than 4 hours of running or the equivalent does little to reduce the risk further. Some studies have suggested that a very large amount of exercise can decrease longevity. For example, a 15-year study of 55,137 participants (including 13,016 joggers) indicated that running reduced the risk of death from all causes by about 30% and the risk of cardiovascular mortality by 45%, with an increase in life expectancy of 3 years. A more detailed analysis of the results was made by the authors in an attempt to answer the question, “Is more exercise better for life expectancy?” The results show a so-called U-shaped curve (Figure 2) where hard runners (>49 MET-h/wk) appeared to have less benefit than light or moderate runners, but this difference was not statistically significant (P>0.05). One MET (Metabolic Equivalent of Task) corresponds to the amount of energy expended at rest, for walking it is 3.5 MET and for running it is approximately 7–8 MET. 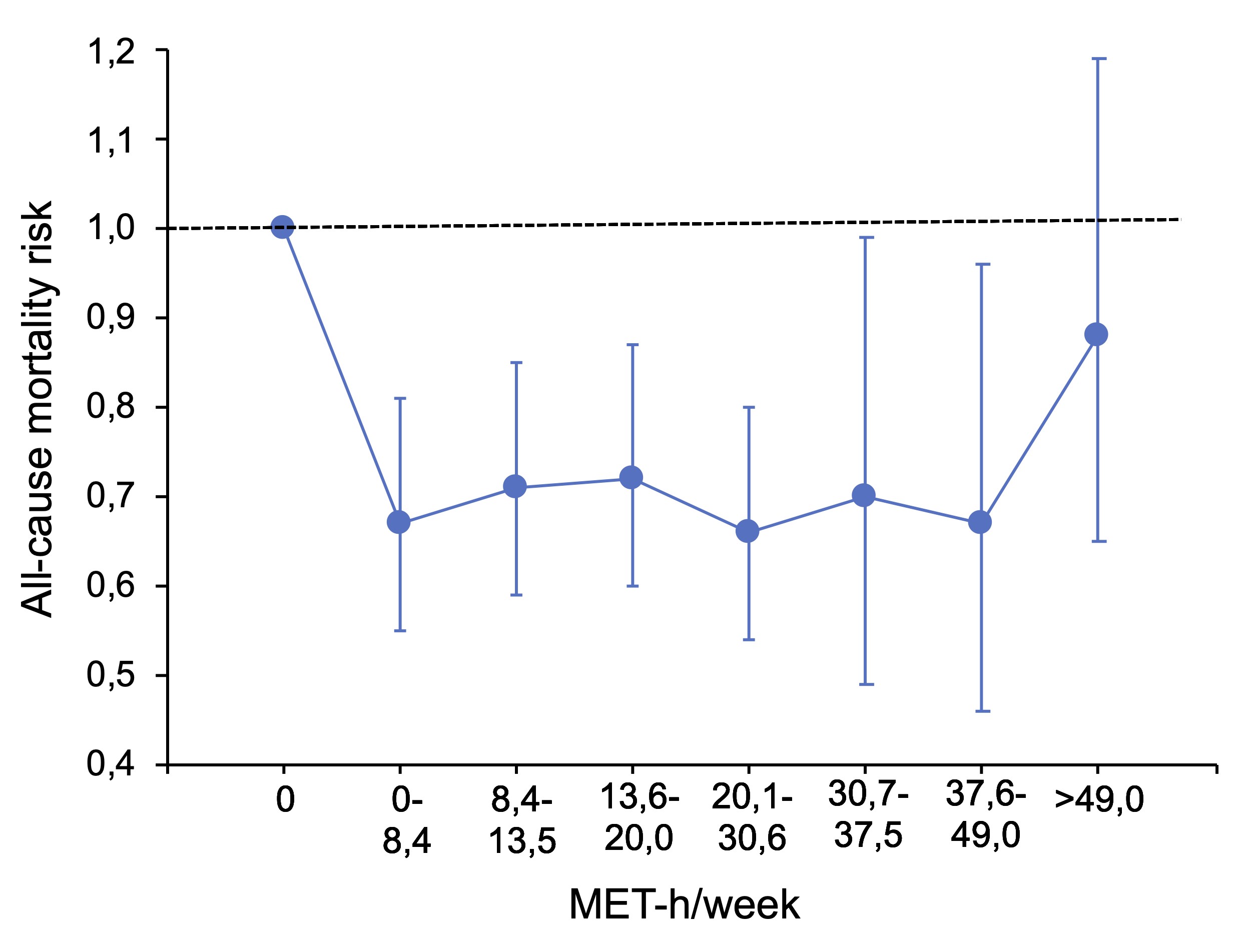 Figure 2. Risk of mortality depending on the amount of running.
Adapted from Lee et al., Mayo Clinic Proc, 2016.

It should be noted that this is a single study, that the people who did >49 MET-h/wk represented only 1.6% of the study participants, and that the variation in the data collected was high. In contrast, the study described above, where very large amounts of exercise had no adverse effect on longevity, is a meta-analysis of 48 studies with a much higher total number of participants. This example illustrates why meta-analyses are so useful in epidemiology: they provide more accurate results (greater statistical power) and make it possible to draw global conclusions from a large number of studies and data. 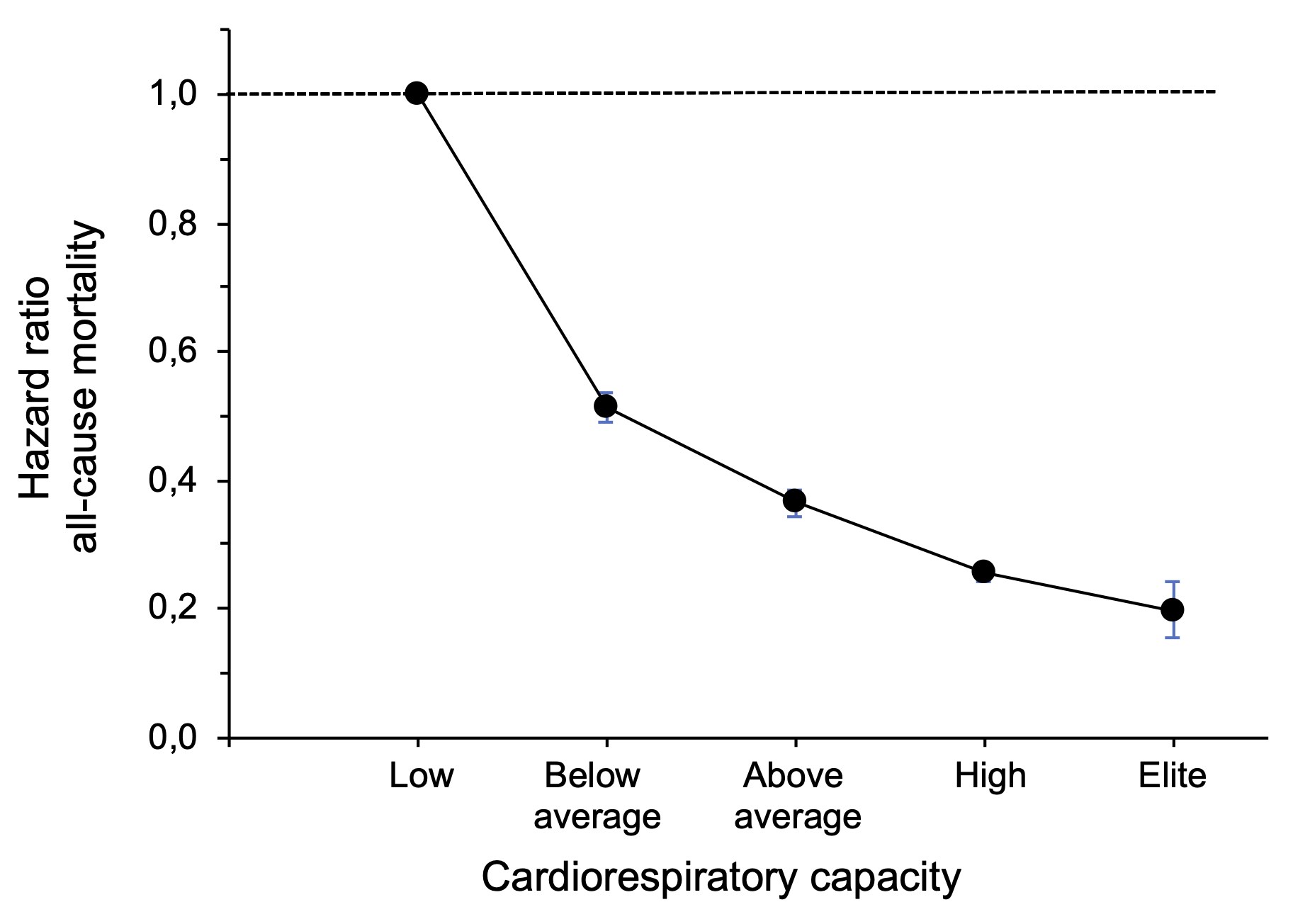 There is no U-curve in this study, but it must be noted that patients in the “Elite” group are not athletes and that it is not known whether or not they exercised regularly. The maximum cardiorespiratory capacity of the “Elite” group averaged 13.8 MET, which is considered excellent functional capacity, but slightly below the level of elite athletes (marathon runners, triathletes, cyclists) whose maximum cardiorespiratory capacity is about 17 to 20 MET. The fact remains thatcardiorespiratory capacity is a modifiable indicator of long-term mortality and that health care professionals should encourage their patients to achieve and maintain a high level of physical fitness.

Running a marathon puts a significant strain on the hearts of amateur runners
According to a Spanish study published in Circulation, amateur runners who complete a marathon event (42.2 km) see their levels of cardiac damage markers increase significantly. Cardiac markers are proteins that are released into the blood when the heart muscle is damaged. In contrast, in half-marathon runners (21.1 km) and 10 km races there was no significant increase in markers of heart damage. A sudden increase in cardiac markers after exercise is generally considered benign because the normal values of these markers are restored after a few days. The authors of the study note that although the release of cardiac troponins into the blood is not an indicator of heart malfunction, higher concentrations after a marathon reflect greater cardiac stress than for shorter runs. The incidence of cardiac arrest during marathons is a fairly rare phenomenon, i.e. 1 in 50,000 runners who complete the race, but these accidents are highly publicized. Cardiorespiratory arrests during marathons occur especially in men aged 35 and over and are caused by coronary artery disease (obstruction of one of the coronary arteries that irrigates the heart muscle). When cardiorespiratory arrest occurs in a young person under the age of 35, the cause is usually congenital heart disease. Given the growing popularity of marathons and the lack of experience and adequate preparation of some amateur runners, this study suggests that shorter races (e.g. half marathons) would be more suited to reduce the stress placed on the hearts of these runners.

No U-curves for light to moderate intensity exercise
The Copenhagen City Heart Study recently reported that leisure time physical activity reduces both all-cause mortality and mortality from coronary heart disease. Compared to sedentary participants, the gains in life expectancy were: 2.8 years for those who did light physical activity, 4.5 years for moderate-intensity physical activity, and 5.5 years for high-intensity physical activity. There is no U-curve in this study, but it should be noted that participants who exercised intensely (4 hours per week or several hours per week of a competitive sport) in this study still did less than those of the other studies cited above. In several other studies of light to moderate intensity exercise during leisure time, a U-shaped relationship was not observed. In other words, it does not seem possible to do too much light to moderate physical activity, such as walking, housework, gardening, baseball or softball, bowling, volleyball, golf, doubles tennis (and other racket sports) and dance.

Humans have adapted to do a lot of physical activity during life. A recent study of the Hazda hunter-gatherer modern tribe in northern Tanzania shows that, on average, these people do 14 times more light-to-moderate physical activity than North Americans. Members of the Hazda tribe have few cardiovascular risk factors (low prevalence of hypertension throughout life, optimal levels for cardiovascular health biomarkers). The Chimanes, an indigenous people in the Bolivian Amazon who have a subsistence lifestyle based on hunting, fishing, gathering, and farming, also has excellent cardiovascular health. Chimanes are very active, travelling up to 18 km per day and it is estimated that less than 10% of waking hours are spent on sedentary activities, compared to more than 60% in North America.

On the contrary, North American adults today sit an average of about 10 hours a day out of 16 waking hours. Physical exercise on a regular basis is therefore necessary to maintain good cardiorespiratory capacity as well as good cardiovascular health and to be able to live longer in good health.