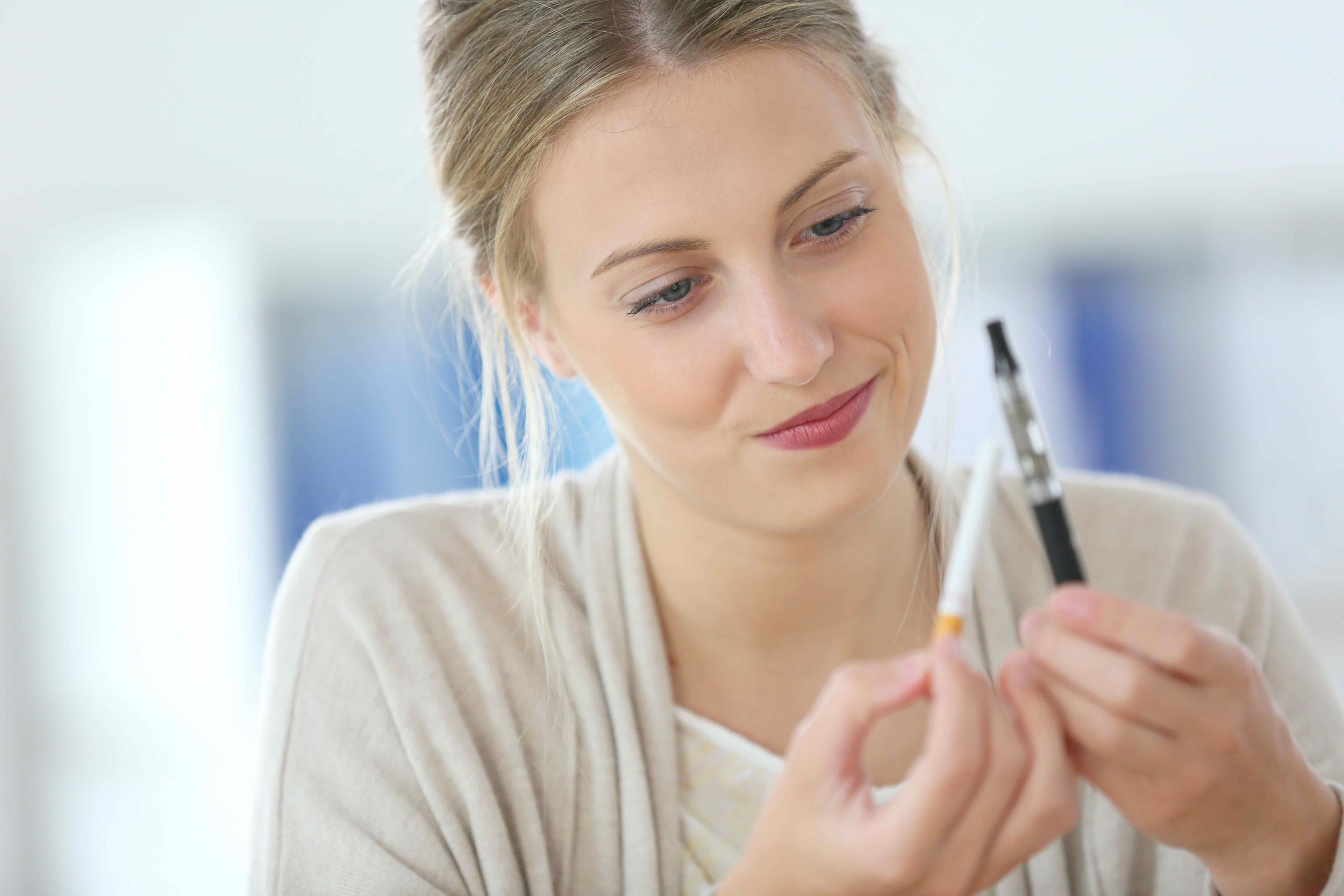 A study recently published in the Journal of the American College of Cardiology confirms the enormous potential of e-cigarettes to reduce cardiovascular damage caused by combustible tobacco. In this randomized clinical study, researchers recruited 141 regular smokers (15 or more cigarettes per day for at least two years) and randomly separated them into 3 distinct groups: 1) a control group, in which participants continued to smoke tobacco cigarettes; 2) a group where participants replaced tobacco cigarettes with e-cigarettes containing nicotine (16 mg); and 3) a group where participants replaced tobacco cigarettes with e-cigarettes not containing nicotine. To measure the impact of different treatments on cardiovascular health, the researchers measured, at the start of the study and 1 month later, arterial stiffness and dysfunction of blood vessels, two important risk factors for cardiovascular disease.

This approach measured 5 major positive changes associated with the substitution of tobacco cigarettes by e-cigarettes:

1) The transition to e-cigarettes quickly improves the function of blood vessels. The function of the endothelium (the thin layer of cells lining the inside of blood vessels) was assessed by flow-mediated dilatation, a technique that measures the ability of these vessels to dilate. An increase in vasodilation allows a better supply of oxygen to peripheral tissues and is considered an excellent marker of the health of blood vessels.

The researchers observed that flow-mediated vasodilation is increased significantly only 1 month after the substitution of tobacco cigarettes by e-cigarettes, independently of the presence of nicotine (Figure 1). The increase observed (about 1.5%) may seem minimal at first glance, but several studies have shown that an increase of only 1% in flow-mediated vasodilation is associated with a 13% decrease in the risk of cardiovascular events. According to the authors, the observed vasodilation values are even close to those of healthy non-smokers, which shows how quickly the transition to e-cigarettes had beneficial effects on the cardiovascular health of smokers. 2) Arterial stiffness is reduced as a result of the transition to e-cigarettes. Arterial stiffness was assessed using pulse wave velocity, a technique that measures the speed at which the pulse travels along the arteries. The stiffer the arteries, the less ability they have to contract and expand as a result of changes in blood volume and therefore the higher the speed of pulse wave propagation. A reduction in velocity should thus be considered as a sign of improved vessel health.

This is what has been observed in smokers who have smoked the equivalent of a pack of 20 cigarettes per day for less than 20 years (20 packs-years): the measurement of pulse wave velocity in these people indicates a significant decrease in artery stiffness following the transition to e-cigarettes (with or without nicotine). However, this phenomenon is not observed in smokers who have been smoking longer (>20 pack-years), which could suggest that in these people, the damage caused by tobacco to the elasticity of the arteries is more pronounced and could not be mitigated in just one month of intervention.

3) Women can particularly benefit from the transition to e-cigarettes. An analysis of the results by sex of smokers indicates that the improvement in vasodilation mediated by the flow obtained following the adoption of e-cigarettes appears to be more pronounced among women smokers than men smokers. This is very important because women who smoke are much more at risk of developing smoking-related health problems than men, with almost 3 times more risk of developing lung cancer and 2 times more risk of having a myocardial infarction. With approximately 200 million women currently smoking cigarettes worldwide, the potential for harm reduction by e-cigarettes in this population is therefore considerable.

4) The more complete the transition to e-cigarettes, the better its impact on the health of blood vessels. An easy test to determine if a person has recently smoked a tobacco cigarette is to measure the level of expired carbon monoxide (CO). The authors observed that participants with the lowest CO levels also had the strongest improvements in blood vessel function, suggesting that the positive effects observed in the study would have been even more pronounced if all smokers had used e-cigarettes exclusively. Nevertheless, the significant improvement in vessel health, even among those who “cheat” from time to time, indicates that any reduction in tobacco use, even if not total, is positive for health.

5) The presence of nicotine has no influence on the benefits of e-cigarettes. No difference in cardiovascular benefits could be observed between e-cigarettes containing nicotine or not, which is consistent with several observations showing that it is tobacco combustion products, not nicotine, that are responsible for the negative effects of smoking. Of course, nicotine is the drug that creates tobacco addiction and encourages people to smoke, but it has no major health effects and is not responsible for cardiovascular disease or lung cancer that results from smoking.

Overall, this study, which stands out from many others, must be commended for its scientific rigour and its clinical relevance. Recently, there have been many reports in the media about studies that claim to show that the vapour generated by electronic cigarettes has harmful health effects, with some going as far as to say that they are as harmful as cigarettes. What the media reports do not say, however, is that these studies often have serious methodological flaws that completely invalidate their conclusions. For example, a few days before the publication of the article described here, a summary presented at the American Heart Association’s annual conference reported that e-cigarettes had an adverse effect on blood vessel function, i.e. they decreased flow-mediated vasodilation. However, these parameters were measured immediatelyafter the inhalation of the vapour, which makes no such conclusions possible: just about anything that is stimulating (coffee, sex, alcohol or even certain foods) elicits this type of acute response in the short term, but this effect is transient and has no longer-term impact. It is only when abnormalities in blood vessel function occur over long periods of time (as in the study described earlier) that they can serve as a marker of risk of future cardiovascular events.

Another good example of disinformation about the effects of e-cigarettes is a study that claims to show an increased risk of heart attack in vapers: a close examination of the data indicates that the majority of the infarctions reported in the study occurred before the adoption of vaping by participants and therefore cannot be due to e-cigarettes! Since vapers are generally ex-smokers, the increase in infarction observed among vapers is simply due to the fact that these people have given up smoking after being sick and are now using e-cigarettes to avoid a recurrence.   It is therefore appalling that this type of study, which does not even respect the basic rules of the scientific approach, is currently being used as a pretext to claim that e-cigarettes are as dangerous as tobacco cigarettes, and at the same time create a climate of mistrust towards these devices.

The main danger of the current anti-vaping climate is to reduce the number of smokers who make the leap to e-cigarettes. I can already see it in my practice: patients who had quit smoking thanks to vaping have started smoking again, while others are reluctant to try e-cigarettes. In both cases, the reason given is the same: if vaping is as bad as smoking, why make the transition? So, we can see that disinformation campaigns can have real consequences for people’s lives and even literally make the difference between life and death for some of them.

It is worth remembering that the ultimate goal of tobacco control is to reduce the incidence of smoking-related diseases, particularly cardiovascular disease and lung cancer. Although in theory total abstinence is desirable to achieve this goal (one cannot be against virtue), the reality remains that many people are unable to quit using current smoking cessation tools and therefore remain at risk of dying prematurely. The value of e-cigarettes is that they allow these people to considerably reduce their exposure to the many toxic substances of cigarette smoke, with immediate positive effects on their health. Moreover, not only are e-cigarettes less toxic than tobacco, but a randomized clinical study recently published in the prestigious New England Journal of Medicine shows that they can be very useful for smoking cessation, with twice the effectiveness of traditional nicotine substitute approaches. Instead of trying by all means to “demonize” e-cigarettes, these devices should instead be seen as a very interesting technological innovation that adds a new dimension to the fight against tobacco.

We must therefore hope that serious studies, such as the one described here, will succeed in putting an end to current disinformation campaigns and remind smokers that e-cigarettes are much less harmful than tobacco and can greatly help them quit smoking definitively.

I want to make it clear that I do not receive any compensation from companies and shops that sell e-cigarettes. I also do not receive fees as a speaker or consultant from pharmaceutical companies, especially those that make products to quit smoking, unlike many doctors and scientists who are very critical of e-cigarettes.