Will cultured meat soon be on our plates? 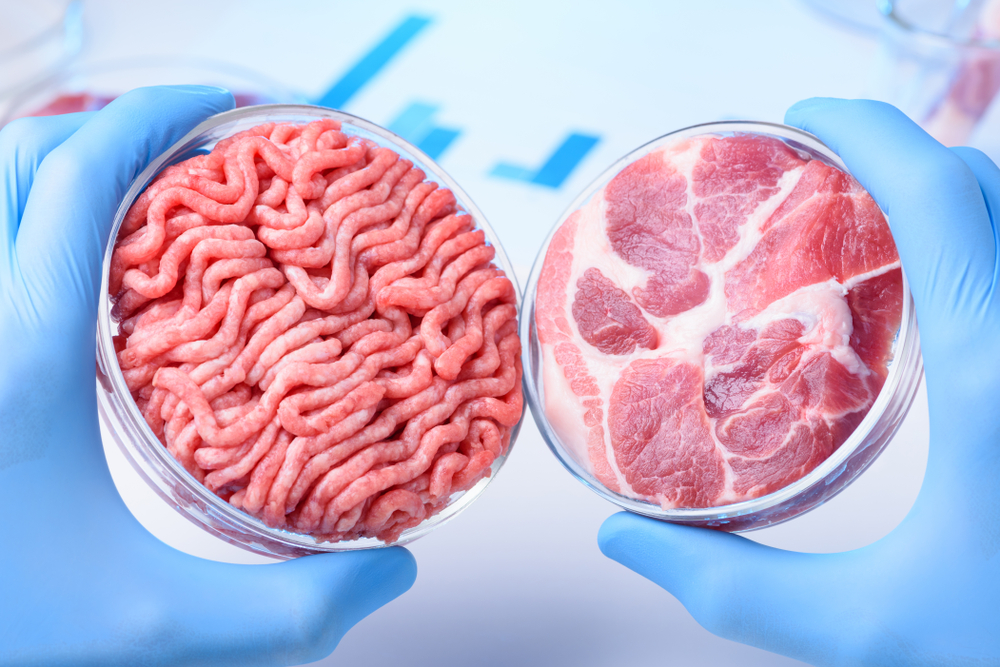 Today there are 7.3 billion human beings on our planet, and it is expected that there will be 9 billion by 2050. The Food and Agriculture Organization (FAO) estimates that in 2050, 70% more food will be required to meet the demand of the growing population. This poses a great challenge because of limited resources and arable land. Meat production (especially beef and pork) is the most resource-intensive, and experts believe it would not be responsible, or even possible, to continue to produce more and more of these foods. Even though meat consumption is declining in developed countries, it is increasing globally because consumers in developing countries are getting richer and meat is seen by the new middle class in these countries as a desirable luxury food.

Among the solutions proposed to get out of this impasse is cultured meat (or lab-grown meat), which is presented as a sustainable alternative to farmed meat for those who want to protect the environment, but who do not wish to become vegetarians. It should be noted that some experts consider that cultured meat poses certain problems and that it would not be a viable alternative to conventional meat (see here and here). We will come back to this a little later in the text.

How is meat grown?
To grow meat, you must first obtain a muscle sample from a live adult animal (by biopsy, under anesthesia) and isolate a subpopulation of cells called “stem” or “satellite” cells. These stem cells participate in muscle regeneration and have the ability to differentiate into muscle cells themselves. The muscle stem cells are then cultured in bioreactors in the presence of a nutrient medium containing growth factors that induce rapid proliferation. The cells are then transformed into muscle cells that form structures called “myotubes” no larger than 0.3 mm in length and mechanically assembled into muscle tissue and ultimately into ground meat or artificial “steak”.

Problematic use of fetal calf serum and growth promoters
The best culture medium for growing cells contains fetal calf serum, obtained from fetal blood after slaughtering a pregnant cow. The procedure usually used (cardiac puncture of the still alive calf fetus) is considered cruel and inhumane by many. This is a problem since large numbers of calves would have to be produced to meet the demand for large-scale meat cultivation, and this use is unacceptable to vegetarians and those who follow a vegan diet or lifestyle. Fortunately, it is now possible, on a laboratory scale, to grow muscle cells without the use of fetal calf serum. However, the serum-free culture will need to be adopted on an industrial scale. To replace fetal calf serum, the industry will need to use growth factors and hormones that will need to be produced on an industrial scale. The use of growth promoters is prohibited in the European Union for conventional meat production; however, you cannot grow meat without using these growth factors and hormones. Overexposure to certain growth promoters can have harmful effects on human health, but this is a subject of debate and several countries approve the supervised use of stimulators in animal production.

From cell to steak
Real muscle (meat) is made up of muscle fibres organized into bundles, blood vessels, nerves, connective tissues, and adipocytes (fat cells). Simply producing animal muscle cells is therefore not enough to recreate meat. This is why in 2013 the first dish prepared from cultivated meat was a simple burger-type patty. Industries that develop cultured meat must now attempt to recreate a 3D structure that will resemble real meat as much as possible, a task that is proving difficult. It’s about recreating the taste experience associated with eating a steak, chicken thigh or shrimp.

Researchers have recently made progress and successfully created small samples of cultured meat that mimic real meat. Using a new approach, a Japanese research group succeeded in growing beef muscle cells in long filaments aligned in a single direction, a structure that closely resembles muscle fibres. When these cultured cells were stimulated by an electric current, the filaments contracted, similar to muscle fibres. Researchers at the University of Tokyo have so far managed to produce pieces of cultured meat weighing a few grams at most. The next challenge will be to successfully produce larger pieces of cultured meat, up to 100 g, and introduce other tissues (blood vessels, fat cells) to mimic meat more convincingly. It should be noted that the culture medium used in this study contained fetal calf serum, an ingredient that cannot be used industrially for ethical and economic reasons, as mentioned above.

Cultured chicken meat
Singapore’s food regulatory agency approved the sale of meat grown by the US company Eat Just in 2020. It was the first time that the sale of cultured meat had been permitted by a state. Eat Just grows chicken meat using a process that does not require antibiotics. This cultured meat is safe because it contains very low levels of bacteria, much less than conventional chicken meat. Cultured chicken meat contains a little more protein, has a more varied amino acid composition, and contains more monounsaturated fat than conventional meat. The muscle cells are grown in 1200-litre bioreactors and then combined with plant ingredients to make chicken nuggets. The Singapore-approved process uses fetal calf serum, but Eat Just plans to use a serum-free culture medium in their future productions.

Estimation of the environmental cost of cultured meat
Cultivated meat production offers many environmental advantages compared to conventional meat, according to a study published in 2011. It would reduce greenhouse gas (GHG) emissions by 78 to 96%, use 7 to 45% less energy and 82 to 96% less water, depending on the type of product. In contrast, a more recent and rigorous study suggests that in the long term, the impact of cultured meat on the environment may be greater than that associated with livestock farming. Cultivated meat production will certainly reduce global warming in the short term since less GHGs will be emitted compared to cattle farming. In the very long term however (i.e., several hundred years), models predict that this would not necessarily be the case, because the main GHG generated by livestock, methane (CH4), does not accumulate in the atmosphere, unlike CO2 which is practically the only GHG generated by cultivated meat. Another study based on data from 15 companies involved in the production of cultured meat concludes that it is less harmful to the environment than the production of beef, but that it has a greater impact on the environment than the production of chicken, pork and plant-based “meat”. In order for the environmental score of cultivated meat to be better than that of conventional products, the industry would have to use only sustainable energy.

Cost of cultured meat
The first cultivated beef burger was produced in 2013 by a Dutch laboratory at an estimated cost of US $416,000. In 2015, the cost of production (on an industrial scale) was reduced to around $12, and it is expected that the price could be the same as conventional meat within ten years. The cultured chicken nuggets produced by Just Eat each cost $63 to produce in 2019, so industries still have some way to go for cultured meat to become affordable enough for consumers to consume on a regular basis.

Cultured meat: an alternative for Canadians?
According to a 2018 Dalhousie University survey of 1,027 Canadians, 32.2% of respondents planned to reduce their meat consumption in the next 6 months. However, cultured meat is not very popular with Canadians as only 18.3% of those consulted said that this new type of “meat” represented an alternative to real meat for them. There is hope, however, as younger consumers (40 and under) seem more likely (34%) to view cultured meat as an alternative.

Will cultured meat one day replace conventional meat on our plates? Although there is still progress to be made before this is possible, both in terms of production and social acceptability, we can hope that the important efforts made will lead to results within a decade. Ideally, for our health and that of the planet, we should reduce our consumption of meat (of all kinds) and eat mainly plants, as is the case with the Mediterranean diet and other traditional diets.